Mike Riley was introduced as Nebraska's new coach in early December and I've been trying to get around to put up a primer for a while now.

This is a guy that has really been just about at every level of football, as long as it was on the west coast. He's coached in the NAIA, CFL, Division IAA (FCS), WLAF (that's the World League of American Football), Division I, and the NFL (he also played DB under Bear Bryant). He's also been in charge of both offense and defense at a high level, serving as the USC offensive coordinator and QB coach in the mid-90s, and as the New Orleans Saints DBs coach in 2002 (at the position where he rose in the ranks initially). The guy understands both sides of the football, and being an NFL head coach little more than a decade ago, combined with over a decade at Oregon St, he understands the wide array of schemes and concepts that can be used. That's a powerful coaching tool, even for a guy already 61 years old.


Back in my day, we had a catchy little tune that described Mike Riley's offensive philosophy pretty well. It went something like

So what's Riley's offensive philosophy? Hit you with a lot of inside zone, switch it up with some power or stretch or even a little read option, throw in a WR screen or two, some three-step drop action, and then taking shots, shots, shots, shots. I am killing this piece with the music references, I know.

But Riley loves two things: Inside Zone and the vertical passing game.

Passing Game
His offense is heavily rooted in the original one-back west coast offense, which has some similarities to what is today called the "West-Coast Offense" as brought to prominence by Bill Walsh, but is different. More accurately, it's closer to an Air Coryell or a Vertical Offense. In fact, he splits his passing game up into several sections: Quicks (3-step drop), Hots (typically 5-step drops with quick reads like all-verts), Solids (deep route concepts that provide simple reads or one-on-one match-ups), and sprint outs. He'll attach PA to any of those pass groupings, and the plays will remain the same. But at the end of the day, it's a QB friendly offense: Quick reads on underneath routes, quick reads or one-on-one throws deep and outside. 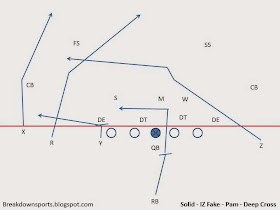 Riley believes in the route tree and learning the entire route tree and making defenses cover everything. His offense often features a single receiver predominately, focusing on deep post routes and double move routes to get him open deep, with small route adjustments based off the coverage. This is especially effective off of play action, and combining that with quick hitting routes (slants, bubble screens) to stress the defense on the outside.

You look back through the previous half decade, and Riley featured a WR that put up really good numbers.

You look at that group and it's quite diverse with it's skill set. Like I said, Riley loves vertical attacking offenses, but he sets that up with running between the tackles, throwing screens and three-step routes, and running a lot of sluggo, hitch-and-go, etc. He will find a way to use his talent at the WR position and get production. 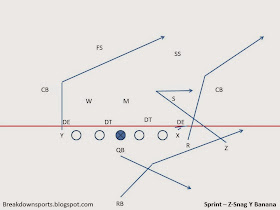 That said, his base personnel is 11, with nearly as much 12 personnel as well (depending on his teams talent and run-pass balance). He will use a FB at times, and when he does it features a lot of Bill Walsh type routes into the flat off of PA, but more often than not it's Ace, mixed pretty well between under center and shotgun. What this means is that TEs play an important role in his offense. Most routes I saw from the TEs were outward breaking routes, away from the wash often caused by PA. This makes sense with an IZ based run game. But they really do mix it up between blocking and running routes, they aren't one-dimensional. They stay in to sell run on many occasions as well, but are also used to move the chains and score points when down near the RZ.

The top TE in a given year in terms of receptions ranged were always ranged from third to fourth on the team, and in yards ranged from second to fifth. But if he has a good RB, he also will use him in the receiving game. In 2009, Jacquizz Rodgers finished second on the team in receptions with 78 receptions in 2009; he'd later use Storm Woods in the same way. He'll have his go to guys, but he'll also find a way to get the ball into the hands of players that make plays, regardless of position. And that's the power of his 11/12 personnel grouping.

Run Game
He'll use a FB, mostly as a lead blocker (so IZ they'll often run to the weakside with a FB lead), but it isn't the norm. He's a single back coach by nature. His run offense, or offense as a whole, is not what I'd call complex. It's rather short actually. It is akin to Norv Turner: simple playbook where execution is paramount. Easy to learn, hard to learn extremely well, but run so well that it becomes difficult to defend. 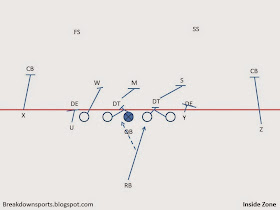 Inside zone is the base and it'll be run the vast majority of the time. He sprinkles in some stretch, he utilizes one-back Power. He'll run some Counter OT, and he has experience with both Option (Counter Option, Speed Option) and the Zone Read. He'll also occasionally package a bubble into an Inside Zone run, whether from gun or from under center. But you won't see a ton of all that. Those are wrinkles. He wants the RB to be able to work between the tackles, and when he wants to go outside the tackles he'll use WR screens or End Arounds more often than not. All that sets up his deep vertical passing game.

Fitting at Nebraska
It may take some time. Mike Riley is a true "Pro-Style" coach. His pass routes lean toward the simple end of the spectrum, a lot of them similar to what the offense was under Pelini and Beck as far as vertical routes. There is less emphasis on the WR screen game though, less emphasis on read option wrinkles that Beck brought from his spread offense background, and more emphasis on getting the ball out, on time, and to favorable match-ups.

Meanwhile, the run game shifts away from the read option and stretch scheme and focuses more on inside zone. The OL will have to transform a bit. They'll have to learn more about holding the first level and working to the second level rather than quickly reaching and getting to the 2nd level immediately. Inside zone was a part of the Nebraska offense, but it will be the base now.

I do expect Riley to adapt a bit. Armstrong is not a good fit for "accurate deep passes". The background with read option will be utilized probably more early on than it will be later. How do they balance what they want to do in the pass game though? Armstrong likes to throw bullets to the outside, but his footwork is a bit inconsistent as is his timing as well. Somehow they have to find a way to make it mesh or move on. It'll be an interesting battle to start, but start thinking of similar ways that former Michigan OC Al Borges used Denard Robinson: not always effectively, but understanding he is a weapon on the ground and find ways to use that weapon on the ground to help him in the pass. Expect the transition to be inconsistent, with flashes of "that's why we brought him" to "we like this guy worse than Beck right now".