Inside the Playbook - Unbalanced Counter CH/OH 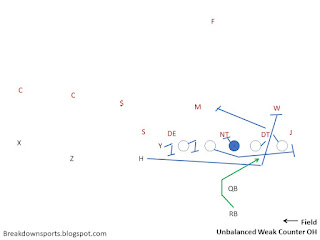 A quick look at Michigan running Unbalanced Counter CH/OH to the weakside of the formation.
Post a Comment
Read more

Inside the Playbook - Michigan's Counter HF 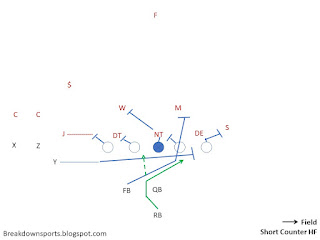 Despite heavily featuring gap run schemes throughout the year, Michigan's plan when facing the vaunted Wisconsin run defense included almost the total elimination of pulling offensive line. In an effort to maintain part of their core playbook, they leaned on a 3-back style offense and "Pull Replace" (replacing a traditional offensive line pull with a back executing the assignment) to retain part of their Counter playbook. In this post, we are going to look at how the Wolverines executed Counter HF from an unbalanced look, how the Badgers responded, and how this scheme can be sequenced off of and run against a variety of formations.
Post a Comment
Read more

By Space Coyote - June 16, 2022
Quickly, I wanted to talk about how Wisconsin is so good at defending gap run schemes. In the video below, I talk about what makes the Badgers defense so good in that regard. Have gotten some love from Wisconsin, so here’s some love back. Watch how well the whole front plays this gap scheme. Box player keeps it inside. 4T holds up to down block. NT fights back on combo. PSLB scrapes right off 4T butt into hole. BSLB ball hits all the way outside PSLB pic.twitter.com/wO4wkAniak — Space Coyote (@SpaceCoyoteBDS) June 15, 2022
2 comments
Read more

By Space Coyote - June 01, 2022
This post features a series of tweets discussing OL technique on a north/south (veritical) double team. PSU Watch the C. Watch his 2nd step (left foot) His eyes are on LB. He knows he needs to check him. But as he opens with his right foot, he lunges forward with his left, and now is off balance. If he moves his left foot laterally or with depth, he can stay square and redirect pic.twitter.com/1MZ901ULQK — Space Coyote (@SpaceCoyoteBDS) February 10, 2022
1 comment
Read more

Along the offensive line, it is important to have various techniques and calls that can optimize player strengths, match ups, and angles, and give the opponent different looks. A "Club Block" is a backside combination block in which the backside end man on the LOS (EMOL) will work immediately to the second level, and the blocker inside of him will work out to the end. Club Block 2014 49ers Playbook In our case, we'll use it as an exchange block between the Back Side Guard (BSG) and Back Side Tackle (BST) as well as between a Back Side TE (BSTE) and BST, with the caveat that it is always the EMOL that is releasing directly to the 2nd level.
Post a Comment
Read more

By Space Coyote - May 27, 2022
I breakdown interesting plays - schematically, technically, and from and execution standpoint - from the 2021 Ohio State at Michigan football game. Just the film this week, but as always, you can find links to previous films reviews for overall summaries of each team provided the tags for each post. Each team has a tag. Other Michigan Reviews:  LINK Other Ohio State Reviews:  LINK All Film Reviews:  LINK All 2021 Season:  LINK First play of the second half OSU vs UM. OSU goes rare IZ from pistol. UM shows two high but rotates to C3 Buzz. Decent gain pic.twitter.com/sRSbSy4tQV — Space Coyote (@SpaceCoyoteBDS) May 10, 2022
Post a Comment
Read more 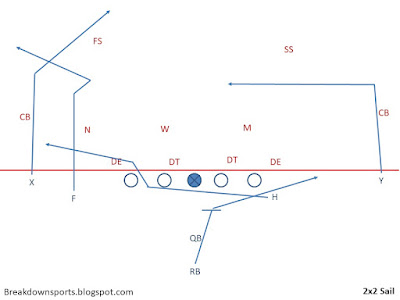