Film Review: Michigan Iterating to Gain an Advantage in the Pass Game

The best concepts in football tend to build off of other known tendencies. In both the run game and the pass game (and the play action pass game), it is easiest to scheme success when telling the defense one thing, initially, and then turning it into something different. In this post, we're going to look at how Michigan has built off of established tendencies to force the defense to respect multiple things.

Against Wisconsin, Michigan expanded their QB run package by introducing a Belly Read Option with an arc block from the opposite H-back. In this post, we'll go over some of the advantages of this play and some of the intricacies that make it a successful run within Michigan's overall run scheme.

Twitter is a mean place. It's a place full of hot takes. It's a place, where if you mess up or are wrong, you're going to get killed for it. And on Saturday night, James Franklin and Ricky Rohne were wrong. They went against convention and decided to run the football on 4th and 5, and got stopped for a loss. So not only did they break convention and not succeed, they tried their best and failed miserably; the lesson is never try.

But, here's the thing, it's not that there isn't logic to the PSU play call. There is. And, in fact, I find it odd that if there wasn't logic to it, if it was so stupid to in fact be beyond reason and rationale, that Greg Schiano and the Ohio State Buckees would just go happen to dial up the perfect defense to stop it. "Huh?" you say. Yes, the RPO play call was in fact so logical, that OSU dialed up a play almost specifically to stop it. Better put: Schiano drank a delicious Penn State Berkey Creamery Milkshake. And oh goodness, was it ever, ever so delicious. 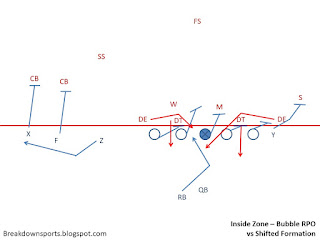 Read more »
Posted by Space Coyote at 7:23 AM No comments:

Film Review: OSU vs PSU, 4th and 5 Inside Zone RPO

Whoa boy is there some people given Franklin thee ole business for his call to go with an Inside Zone - Bubble RPO on 4th and 5 on his final possession last Saturday. I mean, his own fans were calling him out on the way to the locker room and he was ready to have a nice, pleasant, parliamentary debate about the grievance. So what were Franklin and offensive coordinator thinking Ricky Rahne thinking with that call? Let's at least try to give them the benefit of the doubt and take a look.

In the first half of the Michigan-Northwestern game, the Wildcats repeatedly dialed up crucial  gains on simple slant plays. From Michigan's Base Cover 1, this caused coverage problems, especially in the slot where a safety matched up on a WR. In this post, we're going to look at why the early problems existed and what Don Brown did to stop the success of slants while staying within his scheme.

Read more »
Posted by Space Coyote at 7:01 AM No comments: