Against Michigan, Penn State pulled out a nice wrinkle to their run action. While most teams that run out of gun incorporate an inside zone read, the Nittany Lions prefer more of a belly read approach. In this post we are going to look at the difference between the more common Inside Zone run, the Belly Option that PSU prefers, and the counter action off of it with the utilization of a speed option. A couple weeks later Rutgers tried to utilize a similar strategy but had much less success. We're going to poke at the difference between teams in this post as well. 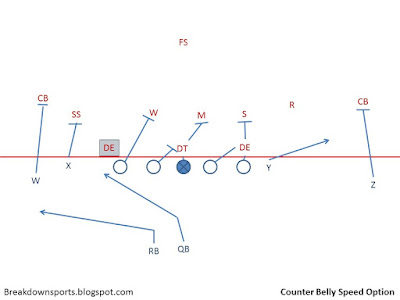 Ohio State has been feasting through in the pass game with one of the core tenets of the Air Raid offense: drag routes. Go into any Air Raid passing playbook from Kevin Wilson (or Mike Leach), or looking back at Chip Kelly's Oregon offenses (the current OSU QB coach is Kelly's former QB coach) and you'll notice that probably 50% of the pass plays contain some sort of drag route. Go to your basic pass game concepts and you'll see that these playbooks are littered with Over, Cab, Crash, Crease, Mesh, and NCAA concepts. Air Raid coaches love these concepts, and so they rep these concepts constantly, because in man coverage their better athletes can run away from LBs or safeties or get beneficial rubs to allow them to run away from CBs. Against zone you can find a void and settle there and wait for the QB to throw you open. In theory, it works against everything. Yet, it still has it's detractors, because if you don't practice it enough, if you don't put in the time, you end up with a bunch of clunky looking routes that struggle to get open against anything: there is no cut to the route to gain separation, you have to be on the same page as the QB on where and how to settle, etc. It is not a cheap system to implement. So by implementing it, you are likely ceding some other things within your offense, meaning that your pass offense needs to be able to build off of the drag route. In this case, the Buckeyes run what is essentially a double move in order to take advantage of the defense cheating the drag. 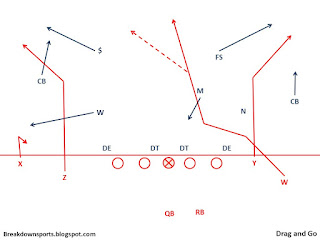