Inside the Playbook: Michigan State Pin and Pull

Coming off of one of the least productive years for the MSU OL in some time, the Spartans have largely retooled the unit and are planning to press quite a bit of youth into the starting lineup. Their current starting line up and key rotational players look like this:

I would argue some of these weights are likely getting a "college roster" bump as well. This is not the beefiest of beef units to set foot in Spartan Stadium. Not that long ago though, Michigan State featured one of the most diverse run blocking playbooks in the league, right up there with Harbaugh's Michigan teams. They ran Power, Counter, Sweeps, Traps, Inside Zone, Outside Zone, and yes, Pin and Pull. But as the skill diminished, so did the playbook, and the settled into mostly an inside zone team with some Power to balance things out last year. This year, they feature that undersized but mobile unit listed above, and the emphasis should move away from "let's push people off the ball" and focus more on "let's force the defense to move with us and let's rely on angles to get run gaps". This should lead to more outside zone and Pin and Pull, which will be the topic of this article. 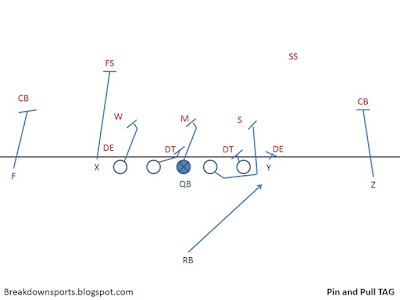 Inside the Playbook: Michigan's Bounce Draw

Jim Harbaugh and Tim Drevno must have been watching their Barry Sanders highlights when they decided to add the bounce draw to the playbook it to the playbook. Or, at least, they were catching up on their Run and Shoot Mouse Davis offense. It’s commonly stated that, at heart, Harbaugh runs a west-coast offense (WCO). More or less that is true, but he has also – like most great offensive minds – borrowed pieces from a variety of other offenses. In that past we’ve seen forays into the spread attack with Colin Kaepernick and some T-offense randomly against Maryland that one time. In this instance, he borrowed from a Run and Shoot offense and integrated it relatively seamlessly into how he utilization trips formations to the field within his nominal WCO (a short, quick, spacing passing attack to the trips side and G Lead sweeps run plays to the trips side) and downfield attack. In this article, we are going to look at how this play functions and why it works within the Harbaugh framework. 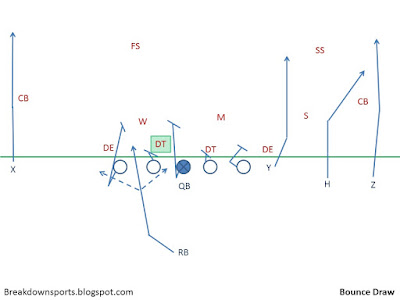