At some point on Saturday, the Michigan vs. Purdue matchup turned into a battle of "who can out execute you" vs "who can out scheme you". Jeff Brohm utilized some wonderfully designed misdirection plays to get guys open in space, while Michigan was confident they could line up and wear the Boilermakers down via execution. But as the game wore on and the two teams continued to play nearly equally, Michigan pulled out a change up that allowed them to get a walk-in touchdown. In this post, I want to look at some little things that happen in the Michigan run game that impact the defense's reaction.

From the recent Upon Further Review - Michigan Offense vs Florida Defense a couple plays came up that I think could benefit from a bit more depth.

In this article, we talk Duo 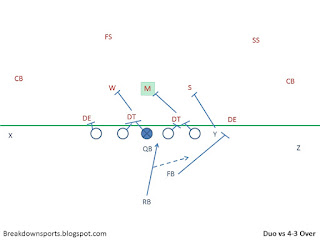 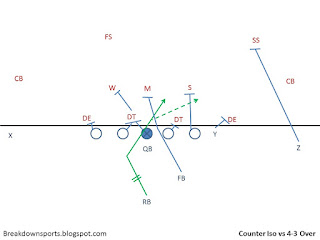 Film Review: 2017 OSU vs Indiana - Fade, Back Shoulder, and a Coverage Adjustment


For nearly a half of play, the Indiana Hoosiers looked poised to make the Buckeyes sweat out a potential early season massive upset. It wouldn't be the first time a team came out with a great gameplan earlier in the year and caught an opponent looking ahead to the supposed bigger challenge.

With the Ohio State on defense, the Buckeyes wanted to come out in a lot of single-high defensive looks, predominately Cover 1, put bodies near the LOS, and out athlete Indiana. In the battle of the DL vs OL, OSU dominated. But on the outside, despite relatively good position from defensive backs, Indiana executed nearly perfectly. One could argue that the execution was bound to wane, but repeatedly throwing one of two throws - a fade or a back shoulder fade to the boundary - allowed IU QB Richard Lagow to find an easily repeatable rhythm, particularly with big bodied and sure-handed WR Simmie Cobbs.

In this article (and the next) we will look at the basic gameplans going into the game and how the Buckeyes made adjustments to turn a close fought game into a 2nd half blowout.

Read more »
Posted by Space Coyote at 5:23 PM No comments: