While the B1G as a whole continues to have a bit of a down perception, there is no denying that there is still a good deal of individual talent scattered throughout the league. As finalists lists for a variety of awards continue to trickle out, below, I post the B1G players up for the award, and some brief thoughts on the player. 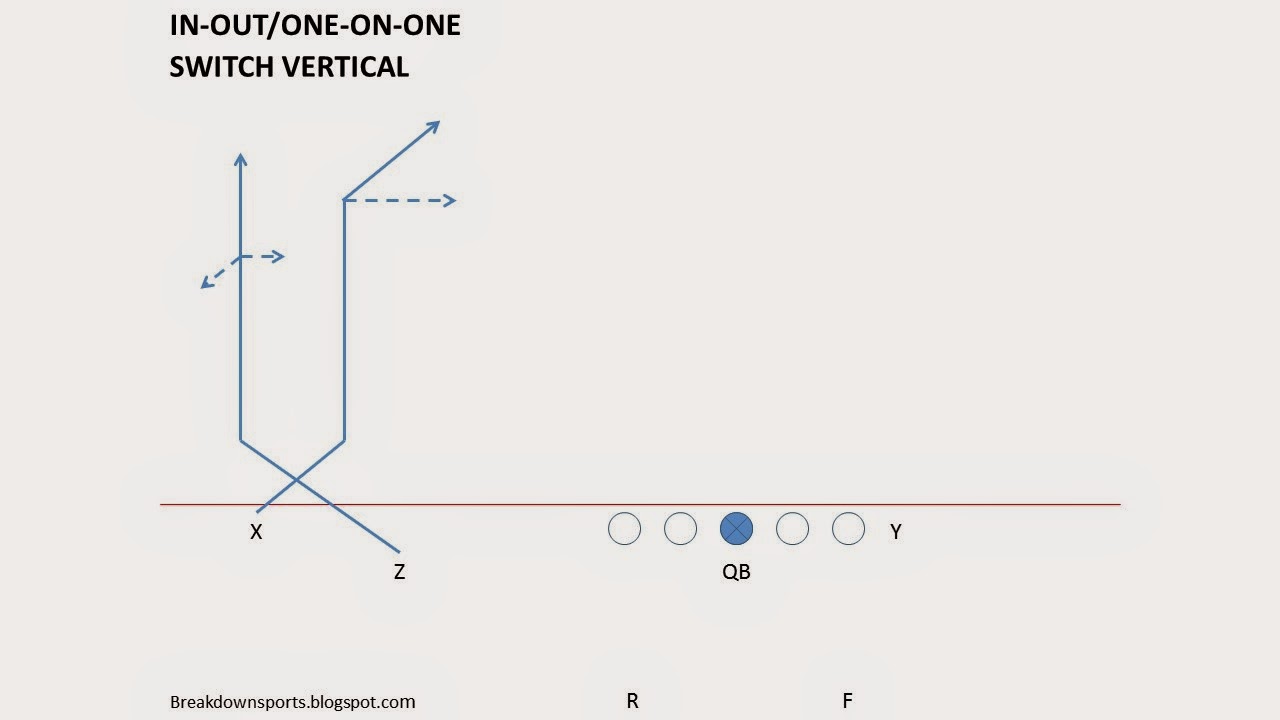 If you've been reading me for a while, you've noted that I'm a big fan of switch concepts. I like them for quite a few reasons:


And I seriously mean etc. There are tons of benefits from utilizing switch concepts as a part of your offense. That doesn't mean you should only run switch concepts, perhaps the greatest benefit of them is because they are paired with your standard releases, but the addition of them makes life so much more difficult for the defense. And they aren't only incorporated into twin sets (as seen below); they can be run with a flanker/TE combination, a Wing/TE combination, a stack set, or even bunch sets with three or more receivers. When you add up the benefits and the minimal amount of work it takes to add to your offense (choose how you'll teach the adjustments to the routes to incorporate the switch, either the timing or the depth, and maintain some consistency with your standard releases) it's no wonder that so many teams utilize this in modern football.

Read more »
Posted by Space Coyote at 5:18 PM No comments:

Video: Offensive Line Video from Around the B1G

Read more »
Posted by Space Coyote at 9:27 AM No comments:

Throughout the first quarter, the primary coverage for Wisconsin was a Cover 4. This, in theory, is a very good run defense, as it puts quasi-9 in the box. However, it also forces safeties to be aggressive downhill players and tackle while firing down. Against a RB like Abdullah, and the way Nebraska was running the ball, this isn’t necessarily an easy proposition for a DB. In this article, we’re going to look at how Nebraska started off attacking with read option with an arch block and attacking with the zone stretch scheme. Then, we’ll look at how Wisconsin adjusted, both their coverage and how they played their front, and eventually stopped the Cornhuskers potent run offense.

Zone Stretch vs Cover 4
This may be Cover 3 or even Cover 1 (seeing the CB leverage makes me not believe it’s Cover 1) that Wisconsin is inverting late, but I believe this is a Cover 4 with the front side safety crashing down. 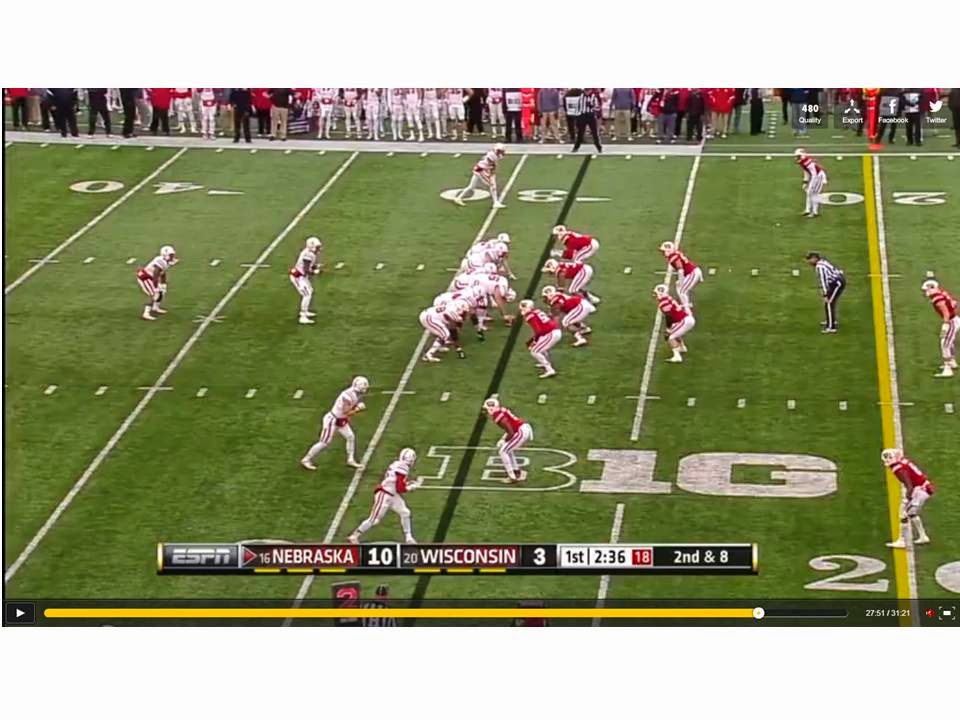 Here we are immediately after the snap, where it is immediately clear that Nebraska is running Outside Zone and the safety starts crashing down. This will lead to the safety toward the bottom of the screen to rotate off the screen as he looks to cover for the TE leaking past the crashing safety. 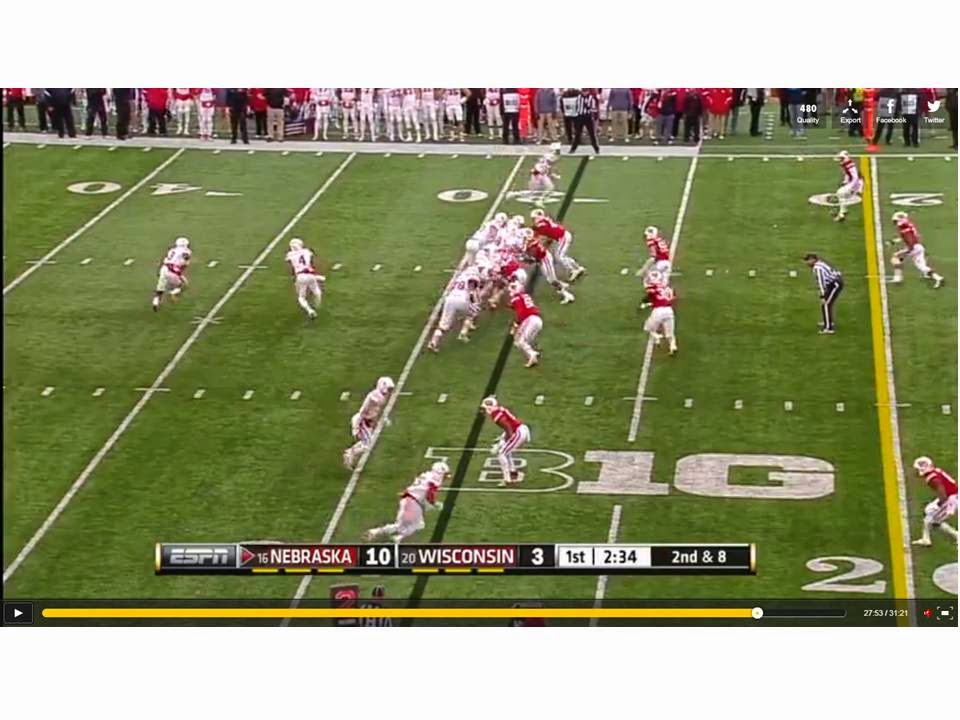 But a few things quickly become obvious as far as issues for the Wisconsin front. First, look above and try to identify the DT of the 2-4 front for Wisconsin. Then note the backside OLB and how much ground he is forced to cover. Also note how there are two Cornhusker OL releasing cleaning downfield without any impediment. You also see that backside DT win playside and get penetration and almost blow up this play, but not get home. You also see the safety get to LB level. 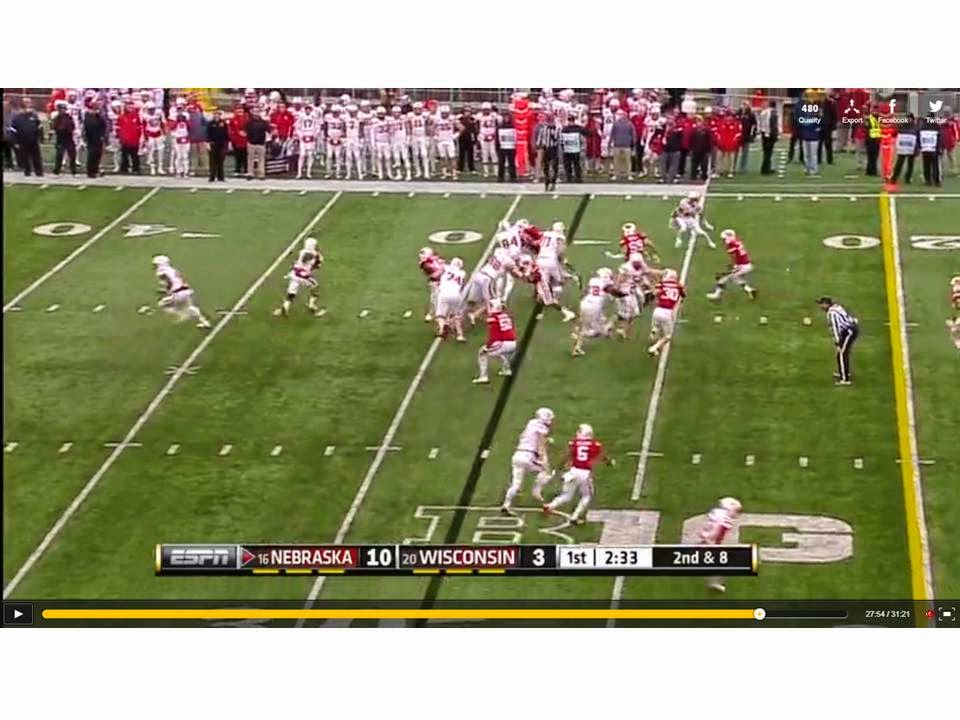 Now, here we are at the point of the attempted tackle from the safety. In theory here, you’re getting exactly what you want at the point of attack from the Cover 4: the safety is an extra man in the box that the offense can’t account for in their zone scheme. But it’s difficult to tackle a really good RB in space (especially when your head is down and you essentially leave your feet). And in case you can’t see it, I circled the backside ILB and where he is now. 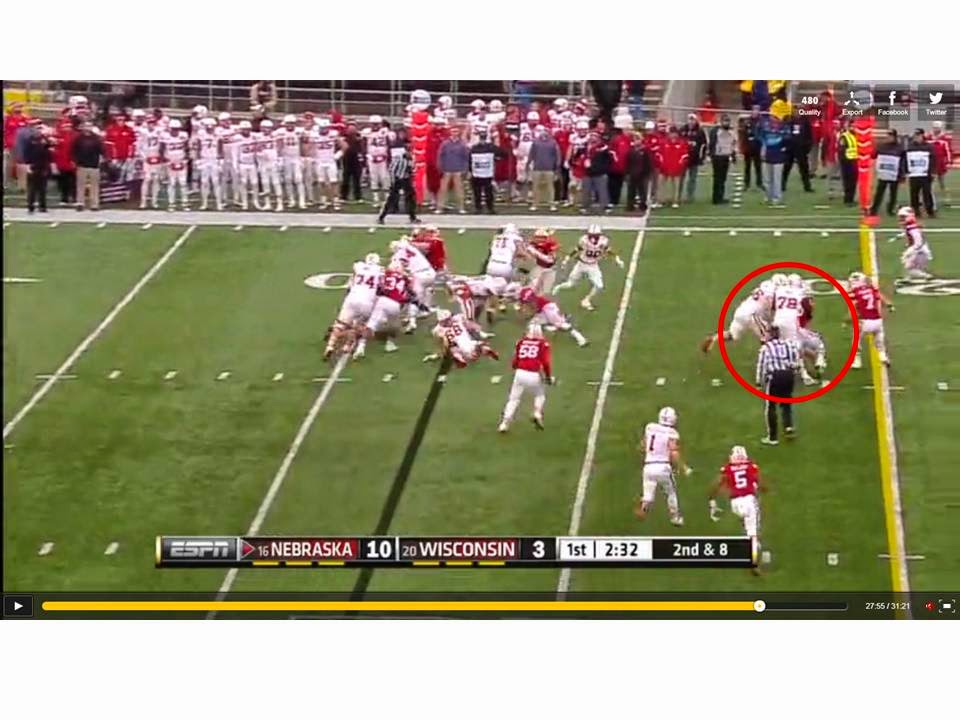 This leads to a seven yard gain for Nebraska, but with what they are seeing, it will become clear why they made the adjustment to the run game they did.

Read more »
Posted by Space Coyote at 9:30 AM No comments:

Wisconsin O: 12 and 11 personnel; a little bit more 21 personnel in this game than usual
Nebraska D: 4-3 Under mostly

Inverted Veer and the FB Adjustment

Utilization of an H-back

Wisconsin D vs Northwestern and Illinois

In this post I just want to diagram every sack up to the Illinois game (post-Illinois will be covered in Part II). Unfortunately, I don't have Western Illinois film, so two sacks will be missing, so you'll have to live with 11 diagrams. I'm going to keep the descriptions of how these work mostly non-existent for the sake of brevity, outside of a brief primer. I embed video where I can and link to a clip where I can't. 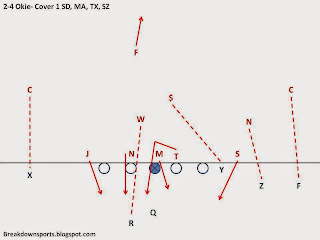 I went on Unsportsmanlike Conduct over at 1620 The Zone to discuss Nebraska vs Wisconsin. Also, they gave me a cool new "Interstellar" inspired opening, so I'll take it.

Posted by Space Coyote at 8:19 AM No comments:

Even with an offense that has sputtered lately in Northwestern, there are still some really cool intricacies and chess matches that can be found from game-to-game. In my opinion, most casual fans get caught up with “is it working or not?” Obviously, in the end, that’s ultimately what’s important. But the issue that I believe catches fans is when they try to figure out “Why?” Often, they converge to mostly meaningless catch-phrases such as “predictable”, “not innovative”, “stupid” and the like. The idea being that they see, they actually see with their own two eyes, a team execute a certain thing with ease and they assume “it must be the play design.” That’s because you can see the play design, you can see it develop in front of you and you can kind of understand it and when it works, obviously it works. Compounding matters may be video games, where many casual fans can call their own plays and feel some sort of ability to do what this guy getting paid a bunch of money can do.

But this is all an aside, and something I could delve into with greater depth at another time. The big picture point is really: even with some of the most struggling teams in the country you can find creativity and interesting play designs that function well as a whole. In this piece, we’ll look at how Northwestern utilized “Switch 86” (Or a “Switch Crease” by concept name), the detached Drag and Follow, and Bunch Concepts with a Bench route from #3. On top of that, we’ll look at how the defenses that went up against them countered these moves.

In this post, I will go through the various position units and place the teams I believe are the top 5 in the conference. This will be based on the actual players that have played, so sorry Indiana, the QB position won't just be Sudfeld.


I went back-and-forth on how I wanted to do this. For some position groups (RB/DL) there are more than five groups that deserve recognition. At other position units, there kind of seems to be less than five. Nevertheless, I plan on doing another one of these post-season, as well as look specific players as I break down All-B1G teams after the season. Note that this is purely an eye test and not based on stats, but instead on games that I've watched these guys play.

In this post, I will go through the various position units and place the teams I believe are the top 5 in the conference. This will be based on the actual players that have played, so sorry Indiana, the QB position won't just be Sudfeld.

I went back-and-forth on how I wanted to do this. For some position groups (RB/DL) there are more than five groups that deserve recognition. At other position units, there kind of seems to be less than five. Nevertheless, I plan on doing another one of these post-season, as well as look specific players as I break down All-B1G teams after the season. Note that this is purely an eye test and not based on stats, but instead on games that I've watched these guys play.

History and Evolution: The Veer and Belly Series

History has a tendency to repeat itself. In football, that means something gets invented, iterations are formed, it gets tucked away for a while, and then it reemerges in a new form but with the same constructs. In this way, we can also predict how defenses will attempt to adjust, and how offenses will likely adjust to their adjustment. And this piece we are going to look at the history and evolution of the veer and belly run plays. The winter movie season is heating up, so I thought I'd discuss briefly another one of my hobbies and discuss some movies I'm looking forward to seeing. Unfortunately, it's a lot of movies, so I probably won't get to see them all. Some of them have also been in theaters for a brief bit, but if you want to catch the tail end of their run, I suggest doing so based on things I've heard.

Maryland O: Mostly 11 personnel from Gun
PSU D: 4-3 Over or Nickel Over; mix of coverage, lots of Cover 6

Two different B1G teams ran the exact same zone blitz scheme on Saturday, and both teams successfully got to the QB. The scheme: Over Gut 6. This is a scheme that Monte Kiffin loved to run dating back to his time with the Bucs, and more than a decade and a half later, it’s still working in major college football (it’s probably more accurate to say Tony Dungy loved to run it with the Vikings, but I don’t have proof of that). Let’s first go over how it is run and then show examples of both PSU and Michigan running it successfully. 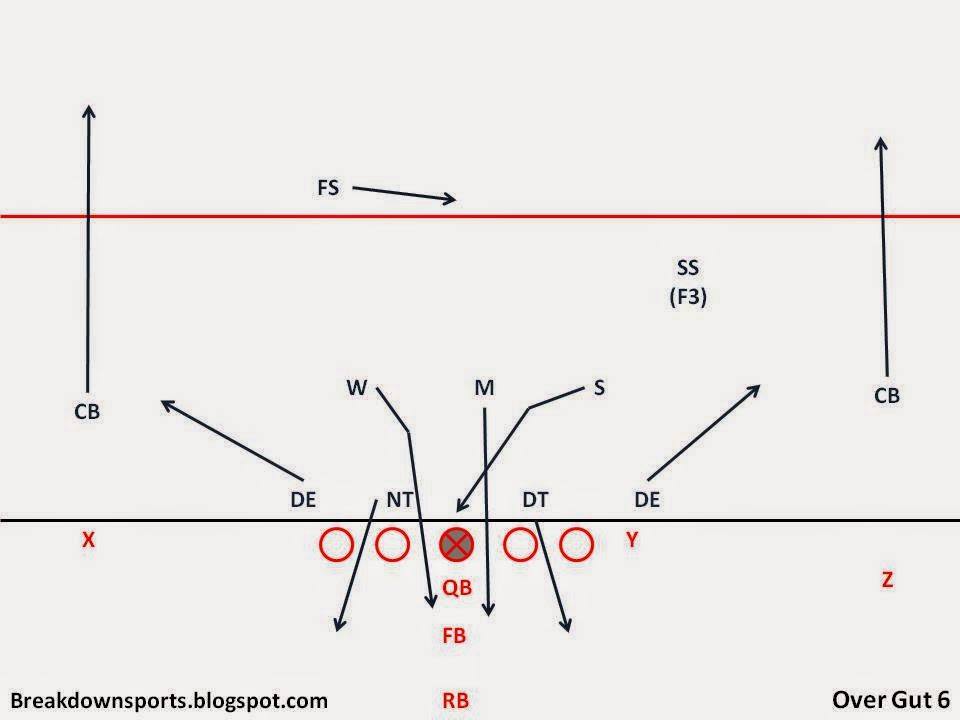 Read more »
Posted by Space Coyote at 8:30 AM No comments:

Michigan O: Mostly 11 or 12 personnel, mostly shotgun until later
Indiana D: I think mostly 2-high zone schemes, not quite sure.