Much of the talk about Michigan football last year was on the offensive struggles, but the change from Borges to Nussmeier isn't the only change happening in the Michigan program this offseason. The defense, dissatisfied with their inconsistent performance last year, is also switching base fronts from a 4-3 Under to a 4-3 Over. In this post we'll look at what this change amounts to, both in terms of scheme and player deployment.

What this isn't
Let's start with what this isn't: it's not a panic move. This isn't switching an offense from a 21 personnel I-form to a shotgun spread. This is a tweak. Many of the fundamentals from last year's defense carry over and Michigan ran some Over front last year. While there will certainly be differences - which is the point of this article - this isn't a complete overhaul that negates many of the positives that the players have learned through the experience they are finally starting to show on the defensive side of the ball.

So... What is this?
I think the coaches for the most part are being very honest: this is a change to adapt to the growing use of the spread offense. This isn't just a change to get Jake Ryan in the middle. But it is a change to get a defense that is naturally more adaptable to more fronts. One of the strengths of the Michigan State defense that many believe is the reason for this change (the Spartan defense, which was easily the best defense in the league last year and a great defense at that, has very little to do with this change, for what it's worth) is that at its core it can be a 4-3 Over against a Power O team as it can against a spread team.
This also simplifies things in multiple other ways, from coaching responsibilities, to deployment of players. In the end, this touches on the foundation for the change: simplify the defense as a whole. On both sides of the ball there appears to be a common theme, that things have gotten too complex, the coaches have been stretched thin, and it's time to get back to basics, do those basics great, and grow from there. When Hoke first arrived, he made references to the 1998 defensive line, the year after Michigan won the National Championship. They struggled because they didn't have a foundation in the basics. Well, this is applying that logic to a different set of circumstances unfortunately, but with the hope that the lessons don't belie the results.

Change in Scheme
Let's explain what the change actually is. Think of a basic 21 personnel grouping. Imagine that the TE always signifies the up direction, and the ball is the center plane or ground level. The under front shifts the defensive strength under the ground level, away from the TE direction. Therefore, the 3-Tech DT is to the weakside of the formation. Conversely, the Over front shifts the strength of defensive front Over the ground level in the upward direction. Now the 3-Tech DT is to the TE side.
Here is a look at a 4-3 Under. 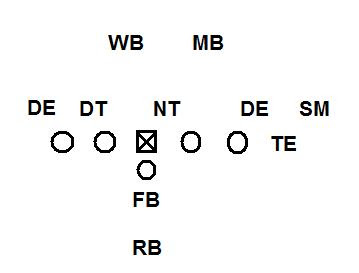 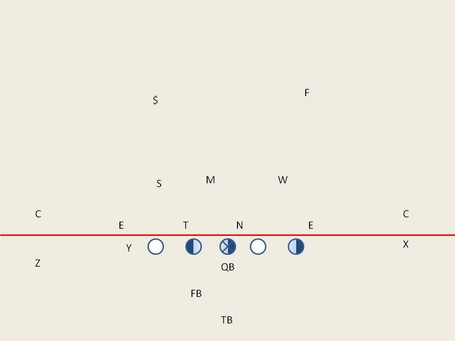 Change in Coverage
Because of the alignment, this does likely change Michigan's base coverage. I do not believe that Michigan will be as stringent with the Cover 4 as MSU is, but an Over front is kinder to a 2-high defense than an Under front is, mostly because of the LB alignment and how the safeties interact with the LB level. On the other hand, an Under front is more likely to have a one-high base coverage. Neither prevents press coverage or aggressive defensive play. Michigan State runs a 4-3 Over Cover 4 base, while the Seattle Seahawks run a 4-3 Under Cover 3 base. But a shift to an Over front does signify a shift to more 2-high looks.

LINK
Posted by Space Coyote at 10:04 AM No comments: