Base Offense: Pretty even between 21 and 11 personnel, with some 12 personnel which I bet you see more of in the season. Lot's of man blocking, lots of run game variety.

Read more »
Posted by Space Coyote at 9:13 AM No comments:

This is intended to be a look at the B1G players participating in the NFL combine (and a couple others that I think may get drafted). I include combine results, though that is only a small part of the equation for me. I put much more value into what I've seen on film rather than by how well someone has been taught to run the 40 yard dash. I try to give a basic overview of strengths, weaknesses, fit, and where I'd expect them to be drafted based on "norms". What that means is that I'm not really looking at mock drafts, I don't have my ear to the ground for what Mel Kiper is saying about a guy. It's just based on what I've seen on film. This will be five parts long, with teams coming in alphabetical order.

Read more »
Posted by Space Coyote at 7:50 AM No comments:


John Harbaugh wrote a piece for the Baltimore Ravens website about why football matters, particularly at the youth and High School level. I think it's well stated and something I very much agree with. The Michigan head football coach, Jim Harbaugh, also agrees with it, and recently posted it to his twitter account. But I thought it was important enough to bring here.

That, in my opinion, tells an important part of the story, but not the whole story. It tells a fundamental aspect of the player and coach perspective of football, particularly for younger players. But football means a lot of important things to a lot of people, even for those whose playing days are done or never began.

One of the things that I have done throughout the past few years is ask people "why is football important to you?" I have my story which has its time and place to tell, about how even the portion when I wasn't playing, profoundly changed and shaped my life. It provided solace when times were hard, it provided structure when structure was absent, it provided an escape when there were few other places I could go. Each fall Saturday I had a bastion that wasn't only a retreat, but a place where I could grow stronger in my character and in the person I became. Football taught me to face adversity and deal with it; each play as a player at every position you either win or you lose and you have to deal with that and the consequences it has on you and on those you care about; each play as a coach gives you the opportunity to internalize that with each of your players and use it as a teaching tool for life; each play as a fan results in joy or sorrow, is won or lost, his costs that feel completely real, but don't need to carry the magnitude that many of the other things in life do. Football prepares you for life like no other sport can.

In my time asking "why is football important to you", I've had the opportunity to talk to a lot of people from a lot of walks of life. I've talked to pro football players, from the "stars" to the guys that have hung around the league in special teams roles for a half-dozen years. I've talked to the walk-ons and the under-recruited. I've talked to daughters who bonded with their fathers and entire families through tailgating and going to Spartan Stadium (or whichever stadium) ever Fall Saturday when the home team was in town. And I've talked to dozens of coaches and fathers that prove that football is very important in our society. Think of Chris Spielman, a husband that lost his wife to cancer, and ask him what football means to him, and I promise he'll bring up family and support and an avenue to change lives. How many lives do you think Tom Osborne has impacted because of football. Ask fans of Wisconsin who jump around, if jumping around is merely dancing or if it means something more.

Posted by Space Coyote at 8:58 AM No comments:

This is intended to be a look at the B1G players participating in the NFL combine (and a couple others that I think may get drafted). I include combine results, though that is only a small part of the equation for me. I put much more value into what I've seen on film rather than by how well someone has been taught to run the 40 yard dash. I try to give a basic overview of strengths, weaknesses, fit, and where I'd expect them to be drafted based on "norms". What that means is that I'm not really looking at mock drafts, I don't have my ear to the ground for what Mel Kiper is saying about a guy. It's just based on what I've seen on film. This will be five parts long, with teams coming in alphabetical order.

Read more »
Posted by Space Coyote at 9:39 AM No comments:

I had the opportunity to go on Unsportsmanlike Conduct and discuss the Cornhusker's spring game. Take a listen (last segment of the day) below.

Posted by Space Coyote at 10:58 AM No comments:

Read more »
Posted by Space Coyote at 9:16 AM No comments:

Primary O: 11 personnel in Gun, typically a trips set. Or 21 personnel from Offset I look.
Primary D: 4-3 Under, typically to strength (sometimes to field). Or Nickel Over. Mostly single high.

Inside the Playbook: Indiana Breaking Tendencies to Run Outside the OTs

Indiana, predominately, was an Inside Zone Read based team with Tevin Coleman. Coleman’s ability to pick through traffic and utilize his power allowed him to churn out a bunch of yards between the tackles, and his vision and cutback ability made him deadly to turn a modest frontside gain into an explosive cutback run. But what I enjoyed most about Indiana’s scheme when utilizing Coleman was their changeup plays for getting outside the tackles. When talking about Inside Zone, you’re looking for vertical displacement of the defense. You punish the first level defenders with powerful double teams and release into the second level defenders to form multiple run alleys along the LOS. To counter this, defenses are forced to start shooting down in an effort to form a wall at the LOS. This makes it so OL have to get off doubles earlier, and so doesn’t allow for that vertical displacement. But through Outside Zone, Pin and Pull Zone, and OG Sweeps, the Hoosiers were able to take advantage of that defensive tendency for huge plays. I’d like to take a look at that now. 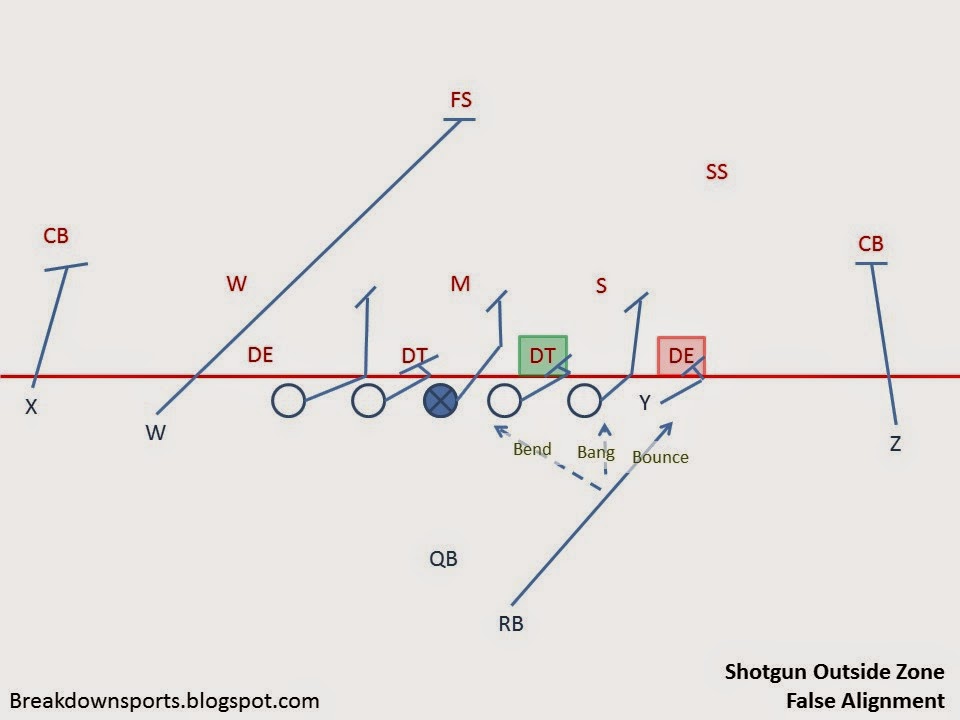 I'm writing about this only because it involves two B1G teams, one for which Rudock played, and another for which he is transferring to.

QB Situation I really don't think Rudock got any help from his receivers. His INT was just about a perfect throw, he also had a TE drop one that hit him in the gut. I thought, for the most part, his accuracy was good, arm strength was good enough. Where he struggled, IMO, was his eyes and getting to the right spot in his progressions on time. Missed a open bench route that should have been his first or second read in his progression (based on defensive key) that lead to Iowa's first punt, for instance.

Beathard might have a little bit better arm strength, though his ball wobbles a bit more. But where he separated himself to me was that he tended to see the field better. Not always on time, but he got the ball where it needed to be eventually. With such a run heavy offense, a lot of the routes will be slower developing, so at least getting it where it needs to be is a good thing, or at least a significant enough improvement.

At the end of the day, I'd have to see the two of them more regularly to make up my mind on who I'd prefer though, this is a small sample size without much separation.


My feelings don't really change on him. He's a guy that is above average in a lot of ways but stands out in few. He struggles getting off of primary reads on time and is at times late getting the ball out of his hands. What this leads to is that by the time he makes his initial read, his primary is now covered and the defense has been able to collapse on the underneath routes, leaving less potential for run after catch (this is scene in his low YPA, despite his nice completion percentage). One of the things I was most impressed with Harbaugh's QBs throughout his time in college though, was that all of them learned to get rid of the ball on time and very quickly. The style of offense changes for Rudock to much more of a quick read O (most of the progressions go from short to deep in Harbaugh's offense) from the longer developing routes Iowa often runs, so that may help Rudock a bit more in that area.

Beathard, on the other hand, simply has better arm skills. He needs to improve his consistency as far as his feet and release, which in turn will help his accuracy, but his stronger arm allows him to stretch the defense deep, keep bodies out of the box for the Iowa run game, and allows him to fit the ball in even tighter windows when his reads are a bit late. He was a young guy, but his ceiling is probably higher at this point, and the threat of his arm likely helps the run game more than Rudock did (FWIW, Iowa tends to hit the flats through their stretch zone scheme and pin and pull, their passing attack counters this with deep to short progressions and lots of crossing routes).

At the end of the day, I think, for whatever reason, Rudock also didn't inspire enthusiasm in his teammates. Take that however you will, but the Iowa offense (WRs and the run game) seemed to try harder and perform better with Beathard, despite Beathard not really looking significantly better. I think Beathard's upside is higher, which is why he eventually took over. While it'd be nice for Iowa's depth to have a SR playing backup QB, if that SR doesn't want to be there and is a guy that previously led the team, the best thing to do, in my opinion, was to let Rudock transfer to put the team fully in Beathard's hands.

In this scenario, I think this situation worked out well for both teams and both players involved.


Posted by Space Coyote at 3:14 PM No comments: