Inside the Playbook - MSU's Switch Concept

By Space Coyote - May 06, 2014
Previously I talked about how MSU offensive coordinator Dave Warner simplified the passing game with easy to read pass concepts for the then inexperienced Connor Cook. In this post, we’re going to look how MSU progressed their playbook, so that later in the year, Cook was trusted to make more advanced reads, and so defenses had a harder time stopping the Spartan’s offense. In this article, we’ll specifically look at MSU’s use of the switch concept.

The Switch Concept
During the second half of the season, perhaps the go to play for MSU on third downs was what is known as the “switch” concept. Dating back to the run and shoot, the switch concept has been a bit simplified, but still relies on one of the core tenets of the run in shoot, albeit to a lesser degree: it is adaptable mid-play via simultaneous reads from the WRs and QBs. Now the switch concept is a staple across college and NFL teams because of its adaptability and relative ease to run. 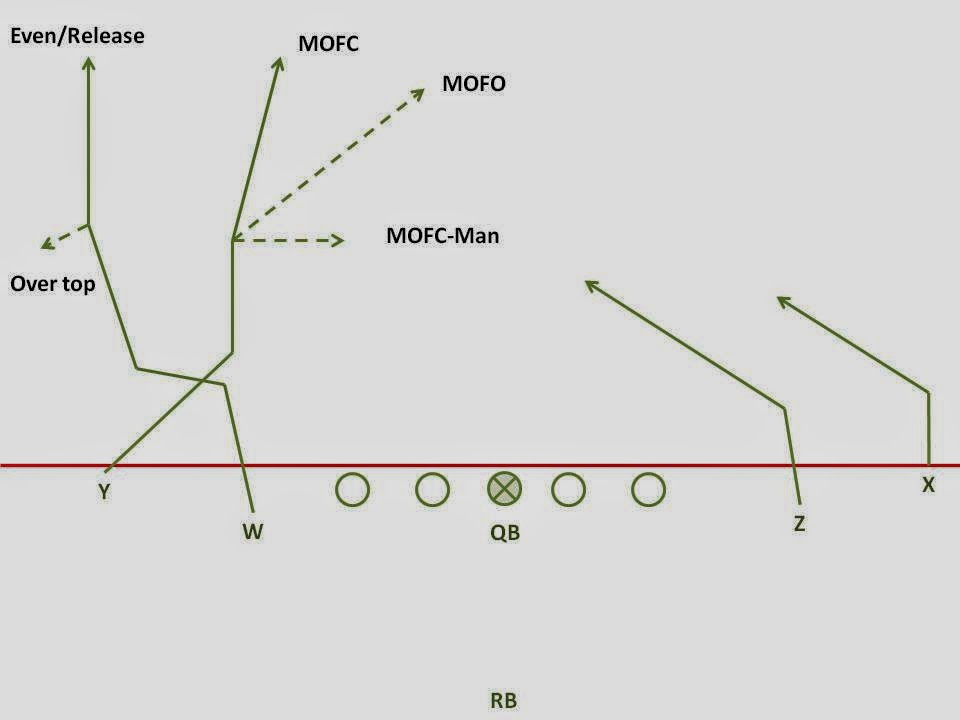 The switch concept is a two-man route combination that works to both attack the field vertically against both zone and man concepts. What we’ll describe here will utilize two WRs, but this play can also be run with a WR and a TE, for instance. Most likely the offense will utilize at least a 6-man protection scheme here, if not a 7-man protection, but the backside routes should provide a hot option, as the front side switch concept requires a deep drop and time to work, and should work to maintain the backend of the defense to prevent them from sliding over the top.

Read on after the jump.

Outside Receiver
The outside receiver will work to get an inside release, stemming his route at the outside shoulder of the man covering the slot. It is important that while he runs, he continue to press vertical against the man initially over top of him. This forces that CB to maintain contact with him in man (rather than allowing for a in/out match up with the inside defender) and creates a wall of sorts. Just as important, it prevents the defender from gaining inside position on him, giving the receiver the ability to run his inside cutting routes depending on the safety coverage.

That is where the play starts becoming adaptable. The outside receiver’s route is dependent on the position of the safeties. Just as QBs often read safeties at the snap, so will the WR. This idea is termed “Middle of Field Open” (MOFO) or “Middle of Field Closed”, meaning there is defense is in a two-high safety look and the middle of the field is clear grass or that it is a single-high safety defense and the middle of the field is occupied, but the seam is open. Additional adaptability can be had when facing a man coverage, as noted in the figure above with “MOFC-Man”.

He also has a couple simple reads: if there is a man in front of him, playing the deep third to the sideline, he’ll check up at 10-12 yards in the void between the flat and deep third defender. If there isn’t a man in that deep third zone, he’ll press vertically and work his route based on the defender matched up with him. If the defender is even or behind the receiver, he’ll continue to run his wheel down the sideline like a Go or Fade route. If the defender that has him in man gets over top of him, the receiver will run a comeback route or a back-shoulder fade toward the sideline.

QB Reads
The QB has a fairly simple progression read, the main difficulty, and the advanced aspect of this route, is that the QB needs to be on the same page as the receiver, both in terms of where they’ll take their routes, but also the depth and timing. 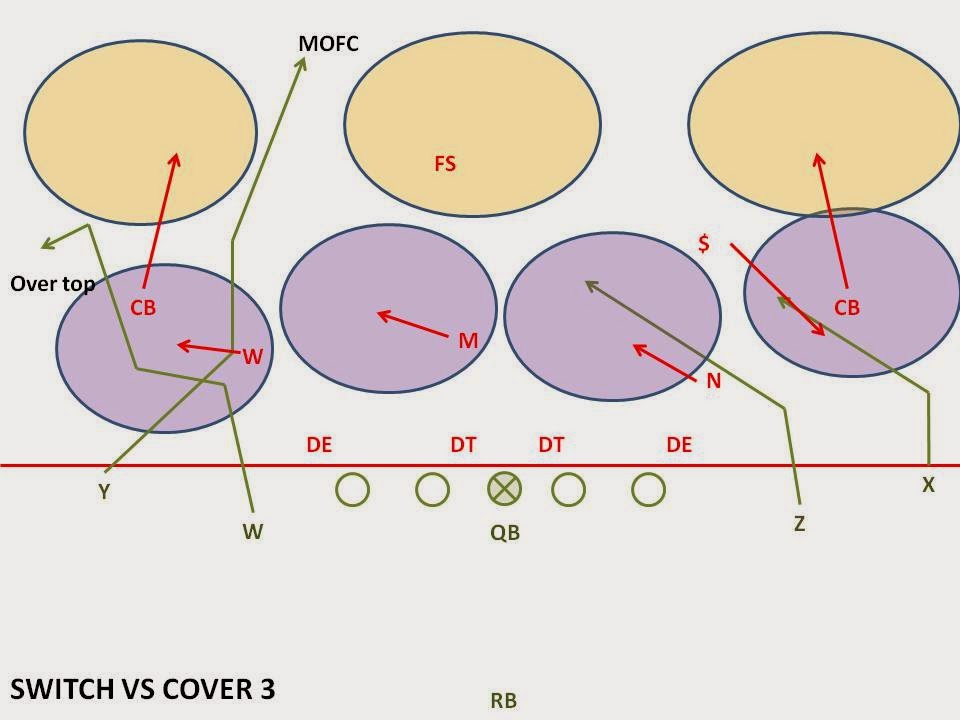 If MOFO, the #1 will run to open grass. In this case, he first will see the playside safety working toward his half of the field. He then needs to find the other safety to make sure he isn’t cheating over the top, either to work toward the switch concept or in a cover 5 look. Well get to that momentarily. If the middle of the field is open, say in a standard cover 2, the #1 WR will run a post, breaking at about the 12 yard mark. The #2 will continue on his wheel. 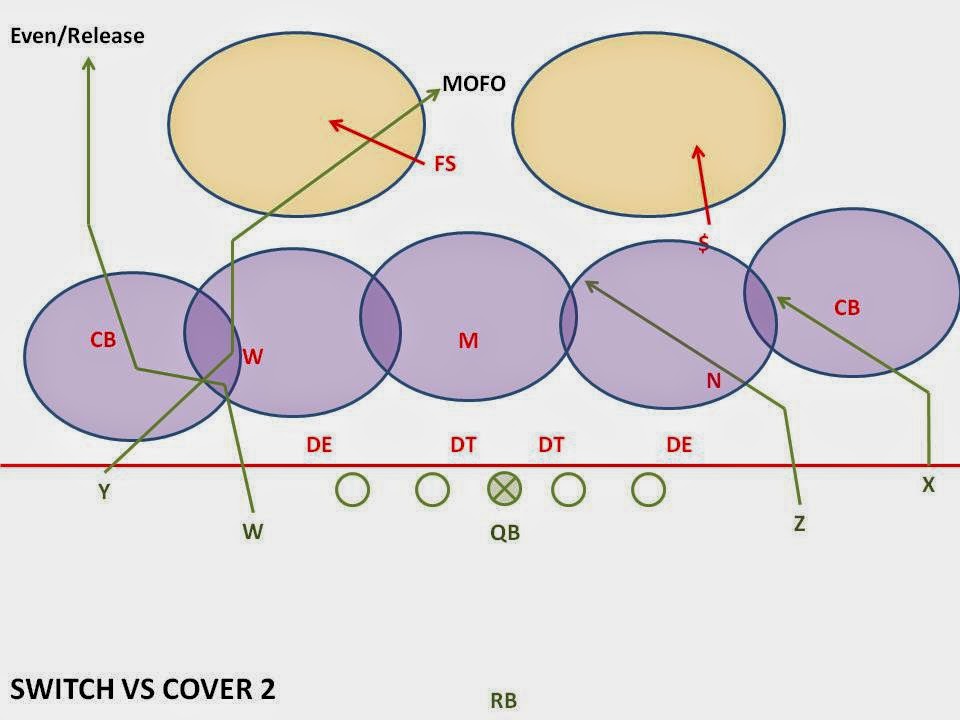 If the opposite safety is cheating over, then the middle of the field is closed, and the outside receiver will square his route and work over the middle of the field at about 12 yards. The seam in this instance is less favorable because the momentum of the far safety carries him towards the seam, and the position of the near safety puts the defender in a good spot to defend the seam. 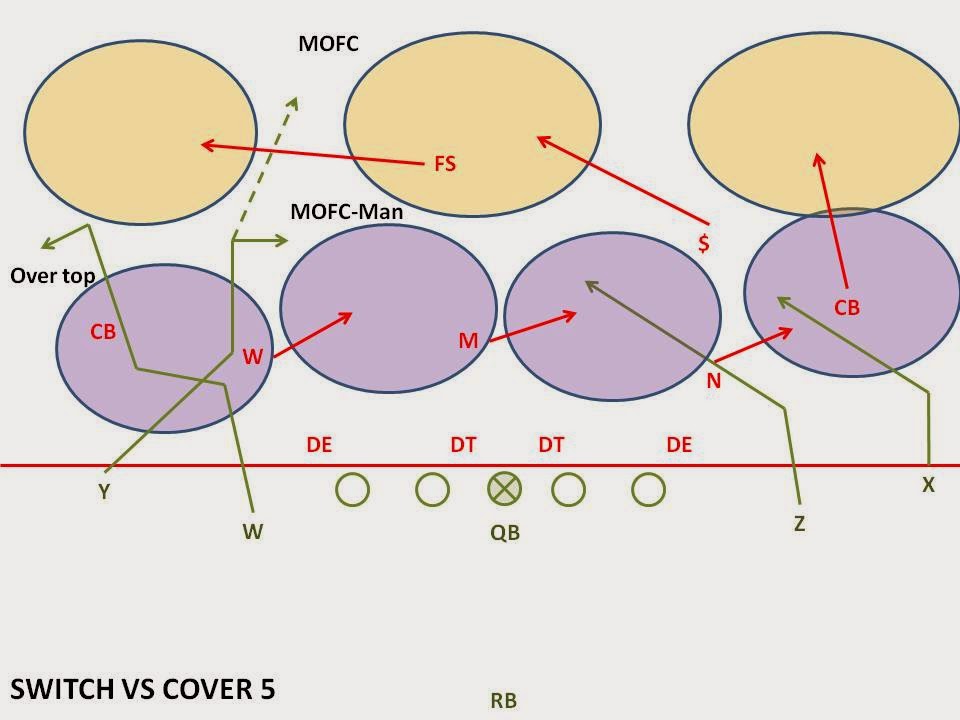 This will also be the route if he feels the CB cheating too far over the top of him to prevent the receiver from maintaining proper position against his defender. Typically, the CB will only be capable of doing that if he has ample help inside and over the top. That means there is a single-high safety, or in other terms, MOFC-Man. Here it is important that the receiver gets the CB to turn up field by pushing hard vertically before breaking inside on his dig. In this case, let’s assume that the rub is successful and that the inside defender is in a recovery position on the wheel. 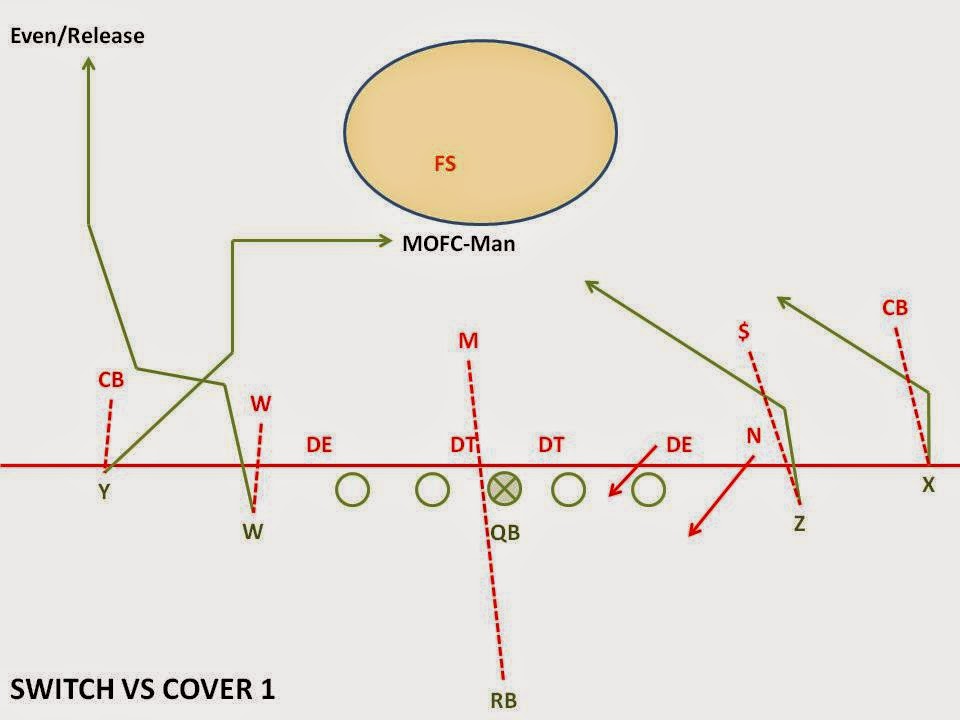 Here is MSU running the switch concept against a cover 1 in their first drive of the B1G championship game. Here OSU is sending the blitz and running man-free behind it. Note how #1 pushes the seam hard, while the #2 maintains good spacing from the sideline. The defender being in poor position, is unable to get his head turned to locate the football and commits pass interference.

Here is MSU running the switch concept later that same drive against a cover 4. Note how the defender initially over the slot stays with him and initially maintains outside leverage at the snap (because he has help over the top and inside from the safety). You see the safety initially break for the #2 before realizing the #1 is coming back inside. He picks him up late, but not before Cook sees his opening outside. In this case, MSU is running a switch concept on both sides, but the backside (with the TE) is more delayed, providing a built in "hot" with the TE.

Note that the rub is not very successful here because the #1 doesn’t work inside well enough (he’s trying to get the CB to work vertically probably a bit too much), but the defender over the slot stays over top of the #2, so #2 runs the comeback. Likely, this was something MSU saw on film and knew how they wanted to attack this look pre-snap, and therefore adjusted their routes somewhat accordingly, though the options still exist. This is likely a designed roll out for Cook, but note on the backside that MSU is running a standard double slant, which provides a hot if edge pressure from the roll side is evident pre-snap or some other "hot" read is made.

So here’s an example of MSU running a concept that required improvement not only from the QB, but also from the WRs. Both position groups struggled for the Spartans in 2012, but the steady progression over the 2013 season, combined with the improved protection to allow for such concepts, was a significant reason why Michigan State were B1G champions.

In the next piece we will look more closely at how Cook advanced in his ability to read defenses, looking at a play that utilizes two standard pass concepts, and allows Cook to read his “alert”, or otherwise one-high or two-high safeties. 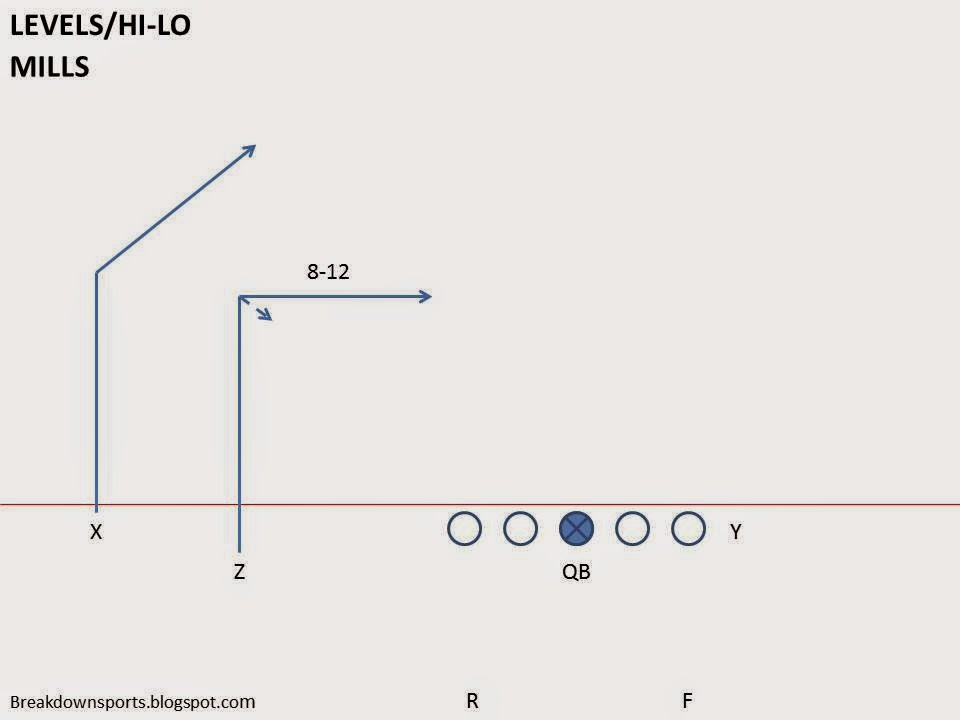 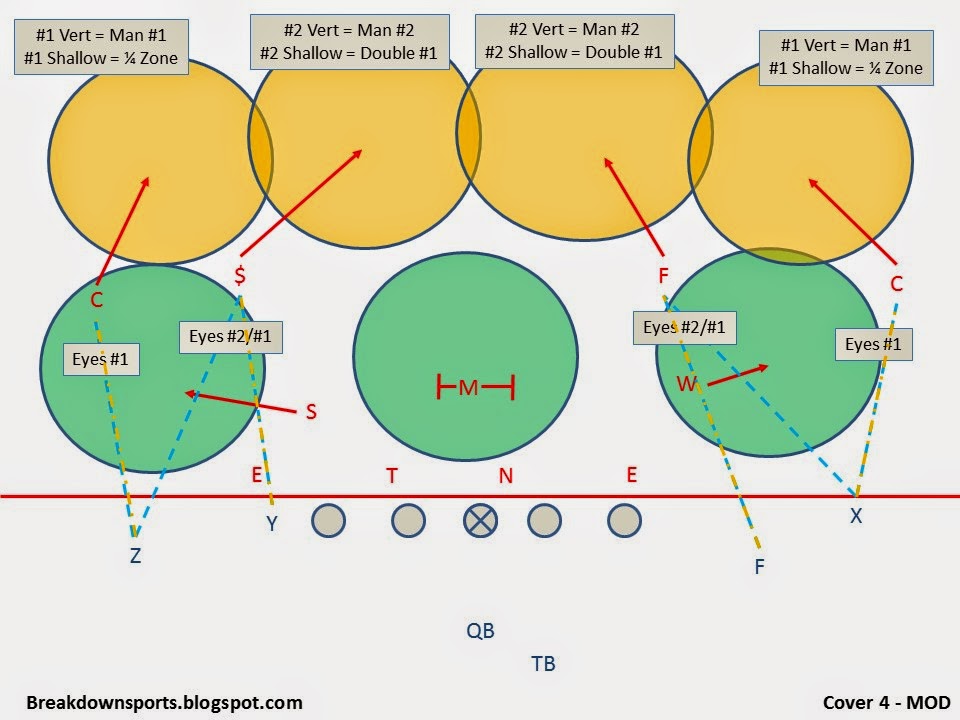 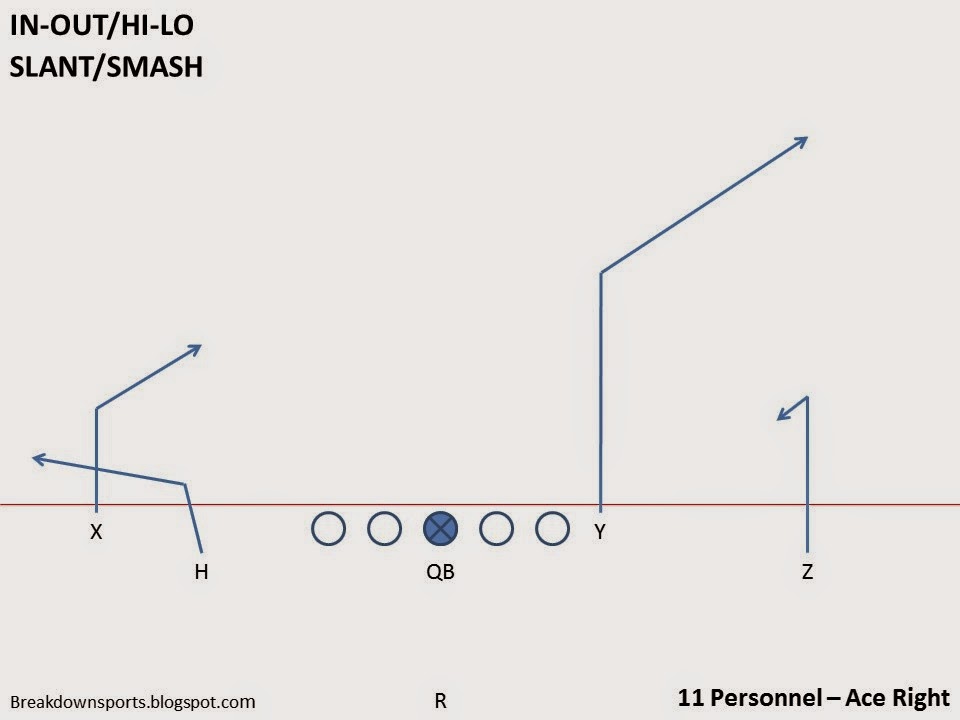