As teams begin to get faster, more spread out, and more pass heavy on offense, a way many defenses are counteracting this is by moving to a 3-4 defense. A 3-4 defense sacrifices some of the beef, at least in terms of numbers, at the LOS in favor of an extra LB (relative to a 4-3). However, not all 3-4 defenses are equal. From a high-level POV, there are two standard types of 3-4 defenses: One-Gap and Two-Gap. Both have different strengths and weaknesses and are generally played differently. In this article, we’re going to focus on the One-Gap 3-4 defense, it’s nomenclature, it’s strengths and weaknesses, the fundamentals of the front, and how it generally plays against a variety of offensive sets. 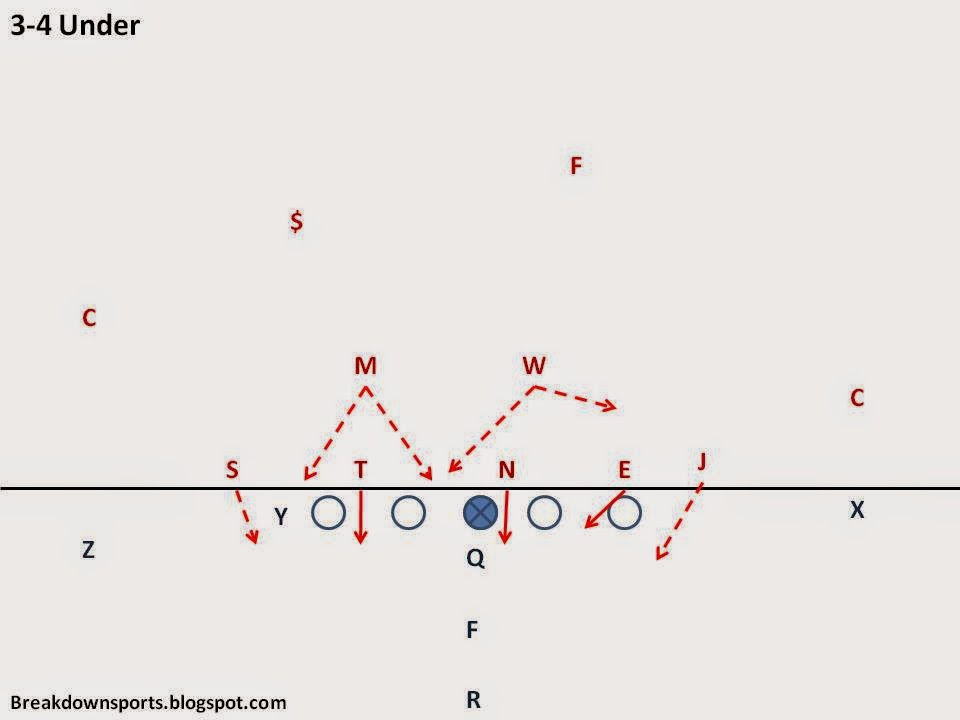 One-Gap vs Two-Gap
To start with, let’s discuss briefly the advantages and disadvantages of a One-Gap vs a Two-Gap 3-4 Defense (Word is telling me this should be “an”, I’m not using “an” because it doesn’t sound right to me; “an One-Gap?” hurts to even say).

A Two-Gap defense is generally better at getting numbers to the ball carrier. If the defense can pull it off, it allows them to fill more gaps with fewer players and allow other defenders, specifically the ILBs, to simply act as extra defenders surrounding the ball carrier. However, the DL must act quick enough to flow in the direction of the football and latch onto the OL adjacent to the one the DL is lined heads-up with. If he isn’t capable of doing that, the Two-Gap 3-4 tends to form natural and somewhat obvious bubbles that allow free releases for the OGs to get into the 2nd level.

The One-Gap defense often performs like a typical 4-3 defense (though some 4-3 defenses utilize Two-Gap DTs for the same reasons stated above) in that the goal is to have a defender responsible for every gap (“gap integrity”), and for that gap to be defined pre-snap in order to allow the defense to play fast. A One-Gap 3-4, however, tends to lack some of the size up front as a Two-Gap 3-4, and some of the size on the edges as a standard 4-3 would. Because of that, the One-Gap 3-4 is intended to be a very fast, disruptive defense.

Nomenclature
Go to any playbook and each and every one will have different verbiage. It’s like coaches got together to make sure none of them called anything the same. Is this confusing? Absolutely. Did this meeting of coaches include beverages? Likely punch, but Woody Hayes’s coaching staff also supplied lots and lots of Bourbon. Are all 3-4 Defensive Coordinators Freemasons trying to control the world and throwing everyone off their scent by naming everything different or just drunks that thought it would be funny to do? I don’t feel comfortable anymore. 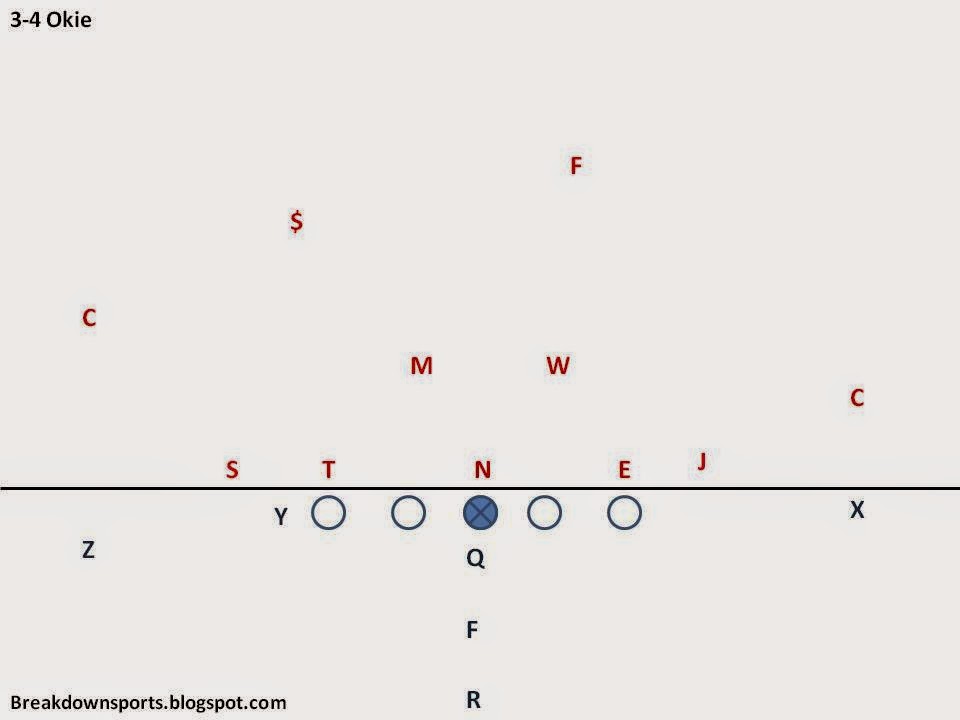 And here’s generally what you want from each position

NT
A guy that can control the LOS and stand up to double-teams. Many One-Gap teams will even utilize the NT as a Two-Gap player to get some of the two-gap advantages into their defense (Two-Gap players are often harder to come by, so this helps when personnel is limited)

DT/DE
You’ll often see these players as interchangeable, with one playing on the right and another on the left. However, if you want to switch personnel, the DE will more often see single teams on the edge while the DT will more often be in the B-gap and face more double teams. Some coaches, particularly those with a 4-3 Under background, will two-gap the DT between the C and B gap depending on how the man in front of him releases.

OLBs (SAM and JACK)
The OLB positions are generally based on the scheme. But the OLBs in a 3-4 are generally hybrid type players, either DE-LB hybrids or LB-Safety hybrids. Some teams will utilize a left and a right OLB. Typically the left OLB is closer to the DE spectrum on the DE-LB scale. The right OLB will be closer to the LB spectrum of the scale. If you play with a hybrid LB-Safety type, you’ll probably want to strong/weak and play the weakside (safety type) OLB a little further off the LOS, to allow him to utilize his athleticism to his advantage and not allow the OT to latch onto him as easily.

ILBs (MIKE and WILL)
Generally, these players tend to be fairly interchangeable as well. Many teams here prefer a right and left ILB. However, some will play to strength as well. Depending on what your base scheme is, you’ll want to play the bigger ILB where he has less protection from the DL, while the other ILB better at fast flowing and a little more instinctual. Both must be capable of taking on blocks, but you can also play closer to strengths in this way.

Did I forget to say etc? I forgot to say etc. Etc. There are dozens of names for these things. I believe the ones I’m using to be a bit more common (Nick Saban utilizes this lingo, as did former Michigan DC Jim Herrman, and many more) and it provides a different letter for each player when drawing up pretty pictures.

Note that sometimes the variance is partially due to scheme. For instance, a Rover is more of a hybrid space player, a mix of an OLB and a Safety, where as a Jack is more often than note a combination of a DE and OLB. But that’s a discussion for another day, I feel like everyone is thoroughly confused already, so we’ll just stick with the names I picked.

Strengths
As I said before, the core strength of the 3-4 defense is that it plays fast and disruptive. If teams aren’t disruptive and playing fast in this defense, they are getting gashed. But in this way, it tends to be a little bit more variable. You can show more pre-snap formations. You can run a lot of twists, stunts, and blitzes. You can run a variety of coverages. You can maintain your base personnel regardless of down and distance. It can produce explosive defensive plays (read: turnovers, TFL, sacks)

Weaknesses
The problem is that you are small, which leads to some issues. If you aren’t able to be disruptive and fast, if you are being controlled by the offense, then you are getting gashed and handled and driven down the field. You are also forced to manufacture pressure because you can’t push and collapse the LOS as effectively. You still have some natural bubbles that allow the OL to get into the LBs. In an effort to be fast and disruptive you can be weak against misdirection and if teams can identify the blitz, twist, or stunt, they can generally attack it. It can be susceptible to offensive explosive plays.

Formations
In this section, we are going to use the standard meaning of “Under” and “Over”. Some coaches, particularly 4-3 coaches that use 3-4 as a changeup, will switch the two shifts so that they match the alignment along the LOS of the 4-3 counterpart. However, by definition, “Under” means the DL shifts to the Weakside, while “Over” shifts the DL to the Strongside.

Let’s start with a 3-4 Under, which is the most commonly utilized One-Gap 3-4 front, particularly by ones that like utilize their Jack LB as a “space” player, basically, someone who can drop in coverage or come fast off the edge. [Note: Some teams will change the gap assignment of the DE based on coverage here, as far as having the B or C gap].

The 3-4 Over front is a bit more balanced. If you have a Jack LB that is a bit bigger and more like a DE than LB on the DE-LB Hybrid scale, this allows him to play more like a DE. Meanwhile, you can tend to get your SAM LB singled up on a TE in the run game. This is essentially a 4-3 Under with 3-4 personnel. 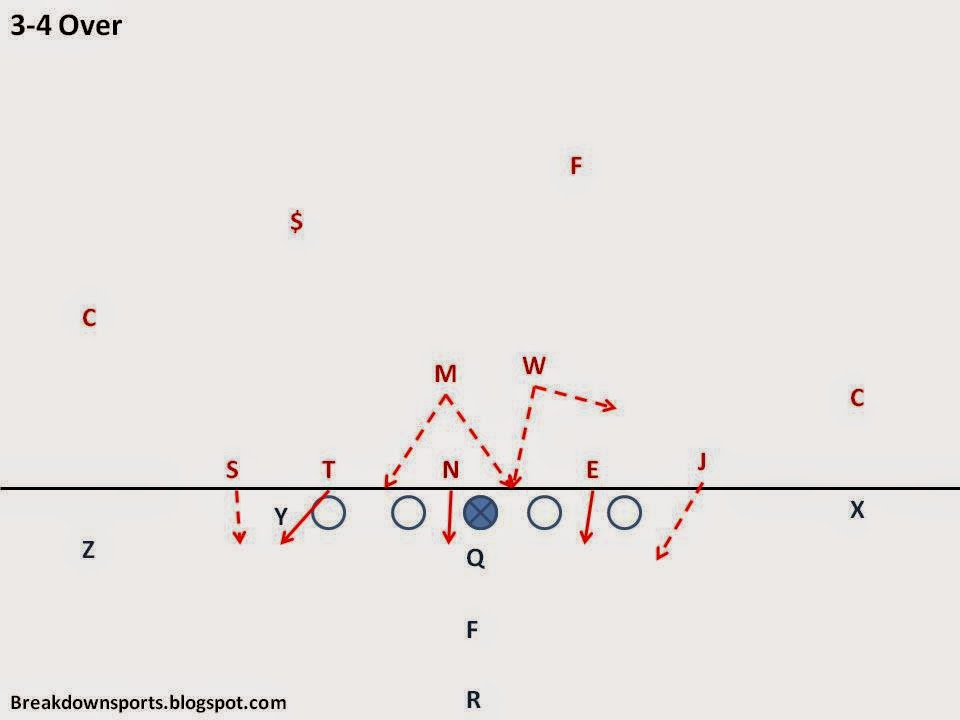 The Okie front is what your standard two-gap 3-4 team utilizes, because all three DL can two-gap from this look. However, a one gap team will also utilize this, but most often will incorporate a slant (strongside) or angle (Weakside) stunt their DL. They can also utilize other twists or stunts, but the heads-up position allows them to threaten two-different gaps to set up the defense. [Note: you can also pinch, or slant/angle only one side of the DL and to better match coverage on the backend] 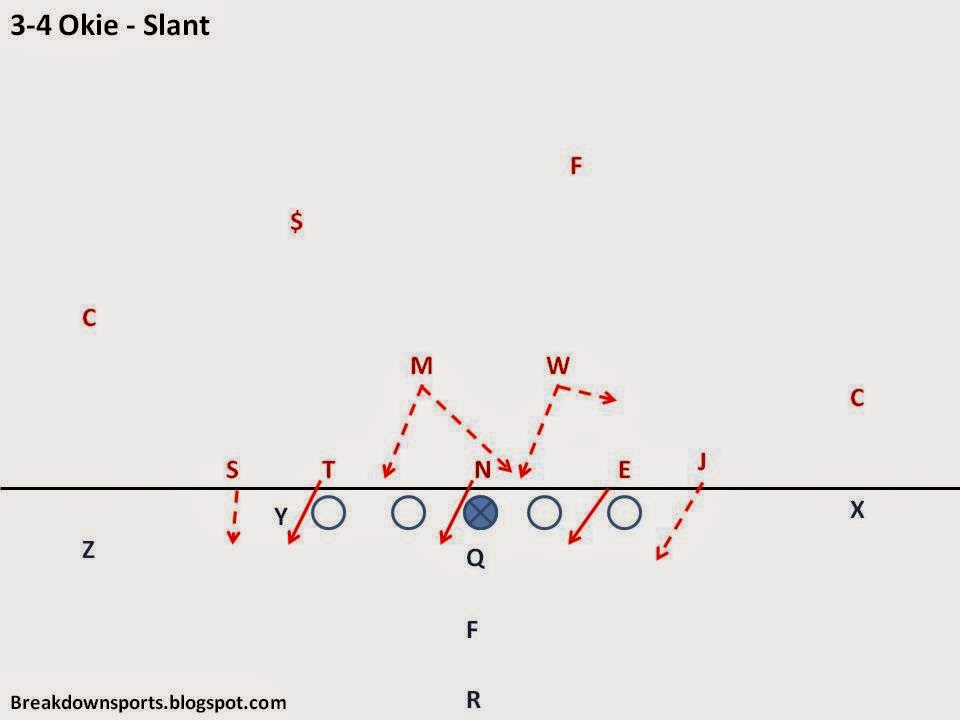 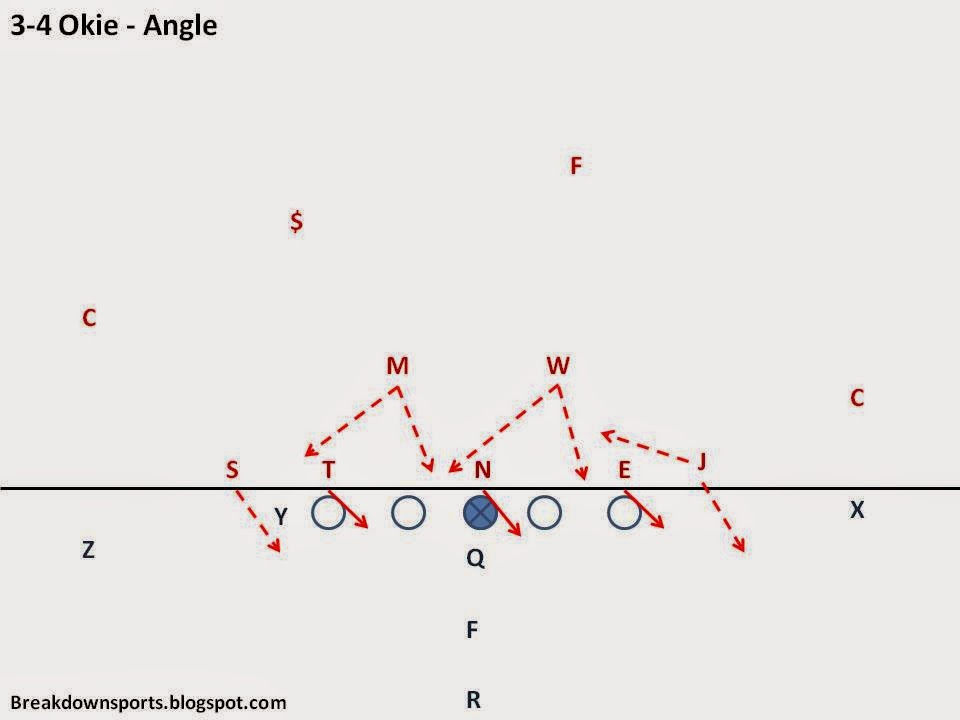 The Eagle defense is a great run stopping defense. It is the predecessor to the Bear defense, which can also be shifted into quite easily from this look. Often times a SS will move forward to create an 8 man box, but below we do not show that. 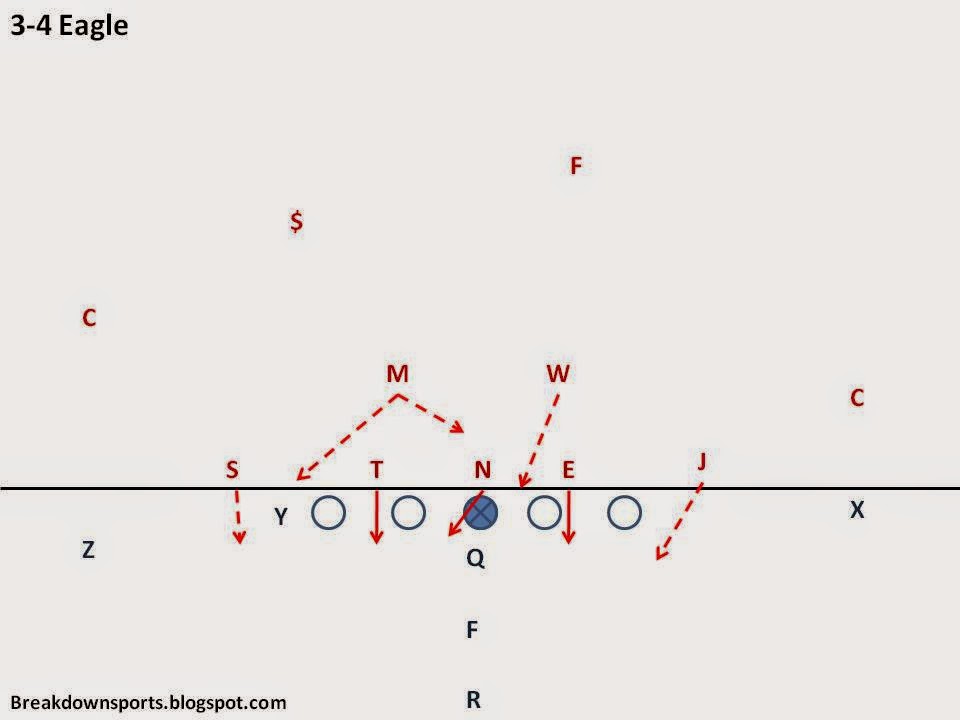 Now, there are also games you can play with the OLB depth, that we will call Flex, Loose, and Off (Flex and Loose are common 4-3 scheme terminology, Flex meaning to standup the WDE, and Loose playing the SAM outside the EMOL and off the LOS). These are often common ways of maintaining base personnel while facing Spread teams. There are a few reasons a defense might want to this: 1) For better coverage of a slot receiver or put a LB in a better position to cover his zone, often times to the field; 2) if he’s a smaller LB it allows him to play the OT/TE in space rather than forcing him to play strength-on-strength; 3) it allows the defense to play more games with the offense in terms of twists and different blitz schemes.

While this is by no means universal, or even necessarily typical nomenclature, for the sake of ease we’ll define each as such.

Flex will be the Jack LB playing off the LOS, either in an Apex position (splitting the difference between the EMOL and the next receiver) or in a 3x3 through 5x5 alignment from the EMOL. The Under 3-4 Under will utilize this more often. [Note here that with the head-up position of the DE, the Jack and the Will can both play games in the blitz package with the DE and have the non-blitzing LB cover for the other] 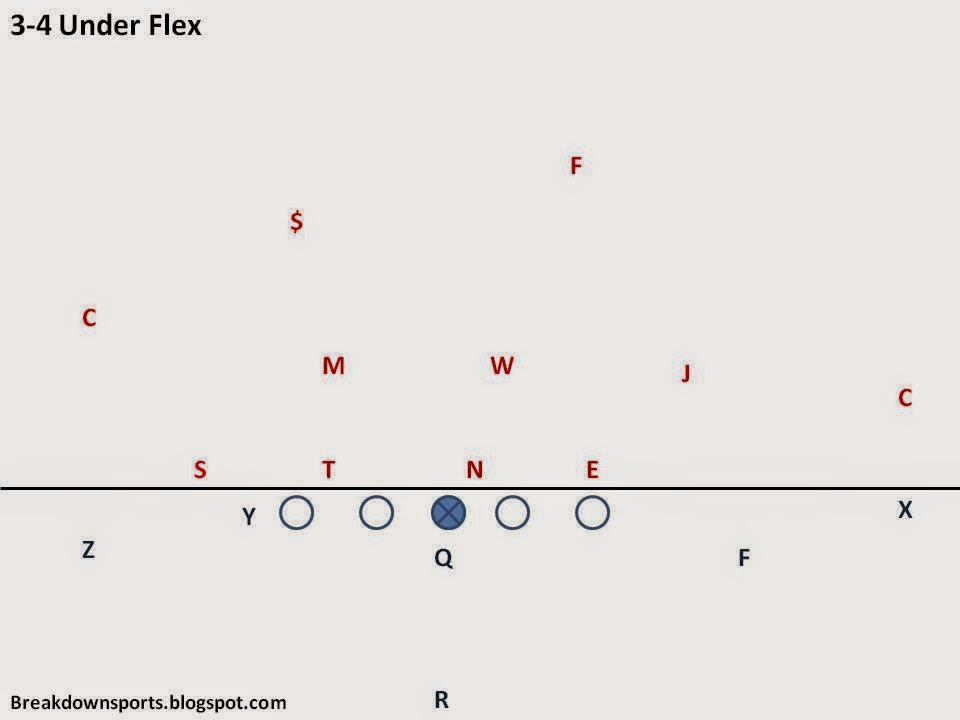 A Loose call will push the SAM in this off position. This will be more often associated with a 3-4 Over front. If the TE goes out in a route, then the DE will have outside leverage on the OT and be able to contain the QB within the pocket. [Note here that there are four defenders for 3 receivers to the Strongside; also, the SAM and MIKE can play blitz games with the heads-up DE; also the WILL can play games between the DT and Jack and not often be threatened in pass coverage] 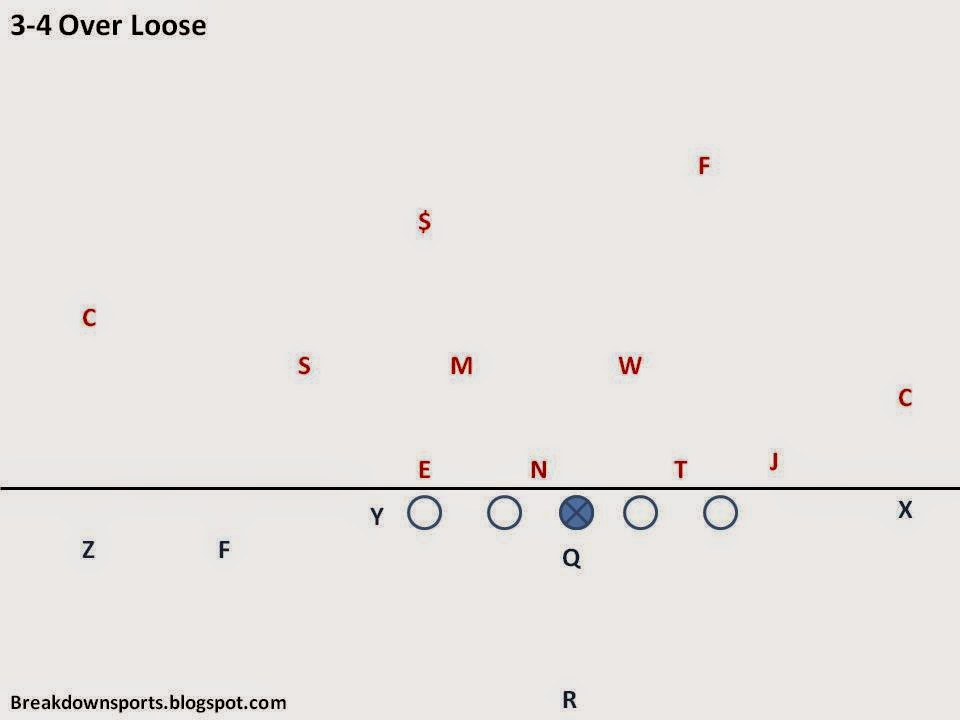 Off is often times best used from an Okie front. The Off look allows for the OLB to get involved in pass coverage, but it also allows the defense to play a ton of games in terms of twists and blitzes, not only with the OLBs, but also with the ILBs (which from the Off position, the OLBs can cover for). This is often times a passing down formation. [Note that to make this a One-Gap defense, often times you’ll combine twists, stunts, and blitzes; this formation also allows for a wide variety of coverages on the back end] 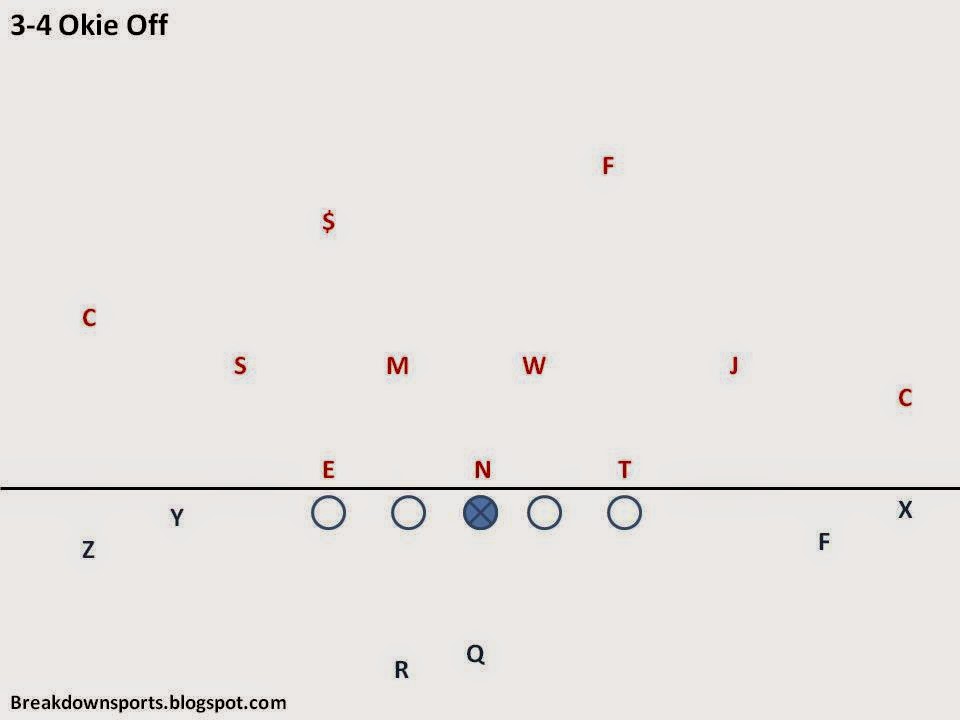 Video
This is from (2014) Boston College Defensive Line Coach Ben Albert (former 2001 Rutgers DL coach for a B1G connection), but does a good job demonstrating the One-Gap 3-4 defense.