Even with an offense that has sputtered lately in Northwestern, there are still some really cool intricacies and chess matches that can be found from game-to-game. In my opinion, most casual fans get caught up with “is it working or not?” Obviously, in the end, that’s ultimately what’s important. But the issue that I believe catches fans is when they try to figure out “Why?” Often, they converge to mostly meaningless catch-phrases such as “predictable”, “not innovative”, “stupid” and the like. The idea being that they see, they actually see with their own two eyes, a team execute a certain thing with ease and they assume “it must be the play design.” That’s because you can see the play design, you can see it develop in front of you and you can kind of understand it and when it works, obviously it works. Compounding matters may be video games, where many casual fans can call their own plays and feel some sort of ability to do what this guy getting paid a bunch of money can do.

But this is all an aside, and something I could delve into with greater depth at another time. The big picture point is really: even with some of the most struggling teams in the country you can find creativity and interesting play designs that function well as a whole. In this piece, we’ll look at how Northwestern utilized “Switch 86” (Or a “Switch Crease” by concept name), the detached Drag and Follow, and Bunch Concepts with a Bench route from #3. On top of that, we’ll look at how the defenses that went up against them countered these moves.

Switch Routes
Switch routes, or concepts in which receivers have a pick or rub off the LOS, are successful for a variety of reasons. For one, there is the rub itself, which helps get separation against man coverage. This separation forces the defender out of position, meaning it becomes more difficult for them to utilize their body leverage to defend the pass and also maintain eye discipline. The second advantage it gives is to help define the coverage a bit. Whether the defense is in a lock, a banjo, or something else, the coverage is clearly defined for the QB, thus helping his decision making process.

Switch 86
Northwestern is going to run the Switch 86 concept successfully at least twice against Nebraska. I don’t want to bog this fairly bloated article down in details, so I’ll keep this description high-level. Switch is the receivers switching starting points off the LOS. 8 is a post route from the X-receiver, while 6 is a dig from the H-back. 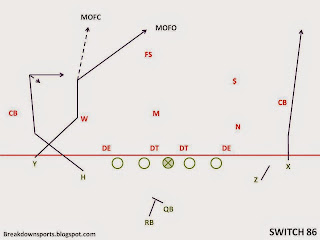 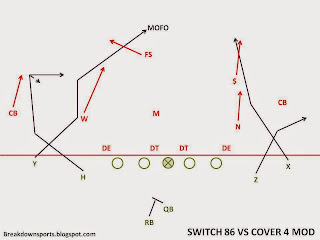 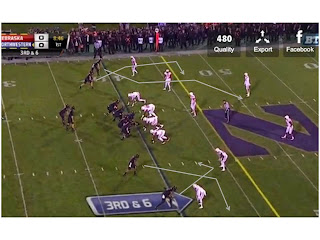 On the first example, Nebraska is in Cover 4. They are not locking on receivers though, rather, they are playing Cover 4 such that any immediate inside stem will get passed off. AKA, this is a MOD (Man Only Deep) Coverage. 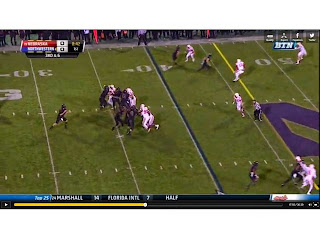 This means the post will get bracketed high and low by the safety and the OLB. What it also means is that the H-back can pin the CB outside and maintain inside leverage. Now, preferably, the Nebraska CB would read through the effective #2 (the X-receiver becomes the #2 after the switch) and see that he is threatening vertical, thus taking the safety. At that point, he would play more over the top of the receiver or trail underneath to work across the body. But that’s asking a lot out of the CB, he must see the play develop, change his footwork, regain leverage on a receiver that has leverage to start, and make a play on the ball. That’s hard. 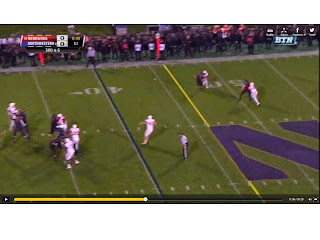 [Note: This looks a lot like an adjustment to "Switch Vertical" concept, but this is pretty clearly not that, as they are not making route adjustments based on the defense but instead deliberately running these routes] 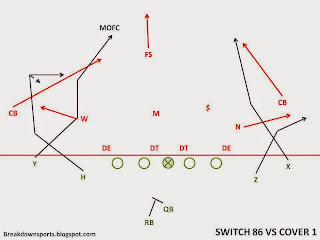 Here, Nebraska is going to play Cover 1 and going to lock on the receivers. This is to Northwestern’s advantage, as the switch provides a natural rub and puts the CB below and outside the #1. In this case though, the rub isn’t really successful. The CB, however, cannot get back inside and gets stuck on the receivers back (the FS is shaded his way, so he may be playing this thinking he has deep help, but the FS is very deep) 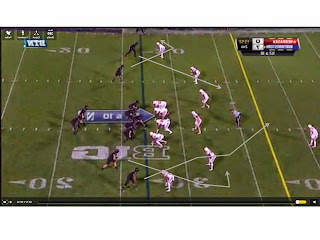 Drag and Follow
The detached drag and follow concept can be found in more detail here. In essence though, it is a lot like the Switch 86 but not as far downfield. They ran it a few times against Michigan. The first time they were successful, the second time Michigan adjusted. 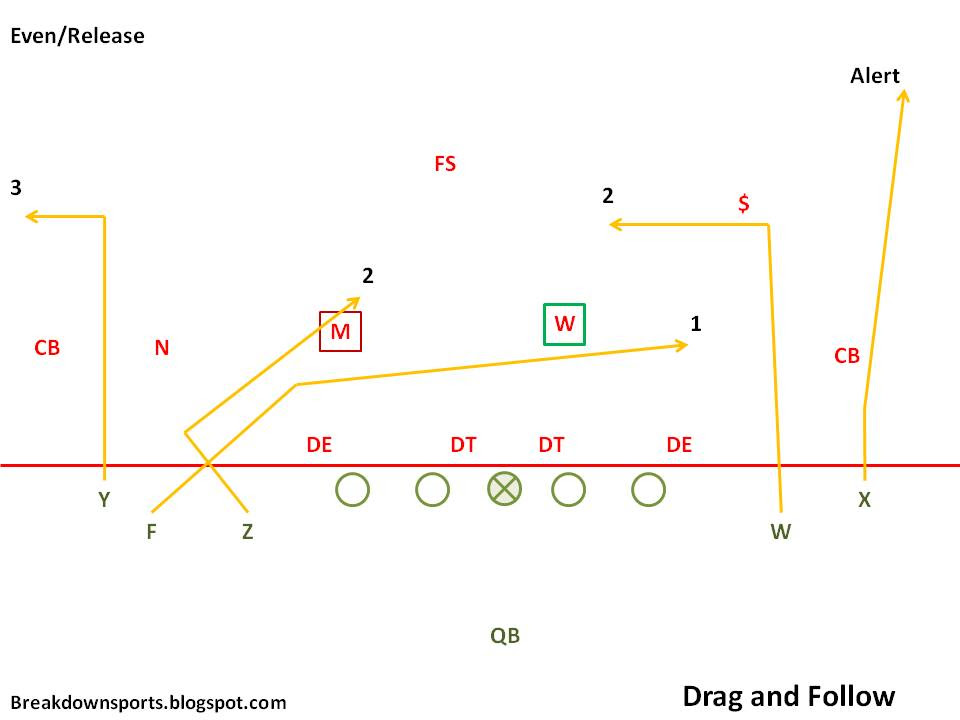 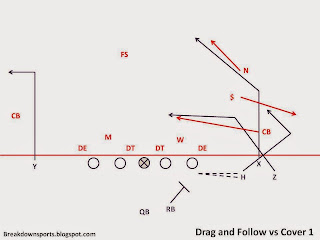 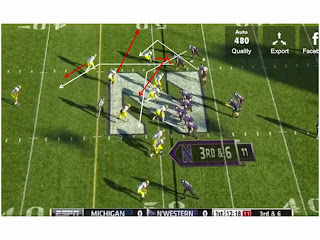 First, you’ll see the H-back Zig-Zag (motion in one direction and then back the other direction). Michigan actually does a really nice job playing at different levels. This allows the underneath CB to play inside leverage and seal the drag outside; this also allows the SS to get leverage outside the H-back as he gets through the wash cleanly. Unfortunately for him, he isn’t running a bench route, but inside is running a follow route. 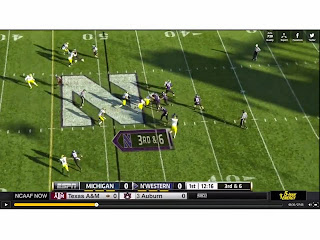 That means that the SS has incorrectly jumped the bench, giving up a lot of inside grass as the other receivers clear out. Unfortunately for Northwestern, Siemian misses a wide open receiver that would have had some good YAC. Here’s the video. 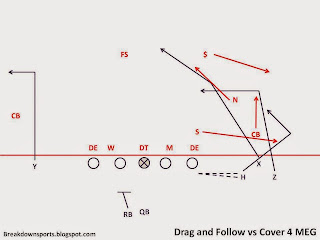 This may simply be Man Under, but regardless, the importance is how this coverage is played by the SAM LB. The defense this time again does well to play at different levels, and this time the SAM can work underneath (where Northwestern could easily threaten this coverage is with a wheel route). 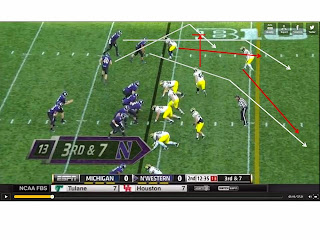 At this point, he plays inside and walls off the receiver. That Lewis (Michigan CB) is able to flip inside the post route is what kills this concept (note the difference between this and the Nebraska example on the Switch 86), that leaves Northwestern with no one open and results in an incomplete pass. 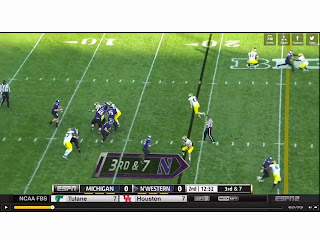 Bunch/Stack Concepts with a Diagonal (Bench) Route
These are the plays that the drag and follow plays off of (the Diagonal route is the route the Michigan SS is trying to jump in the example above). In this case, the rub seals the inside receiver inside or the outside receiver outside after they switch.

Bunch Mesh vs Cover 4 Box
Michigan is playing Cover 4 with a box adjustment to the bunch set. With the way Michigan is aligned, the MIKE will take the first receiver to threaten inside, the SS the 2nd receiver inside (or third outside). The SAM will take the first receiver to threaten outside, while the CB will take the 2nd receiver outside (or third inside). This prevents Michigan from having to fight through picks. Notice that it also takes defenders out of the box though, which means they have fewer exotic blitz looks they can run, and fewer defenders to defend interior runs. 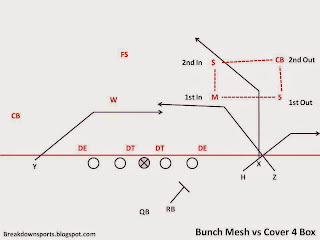 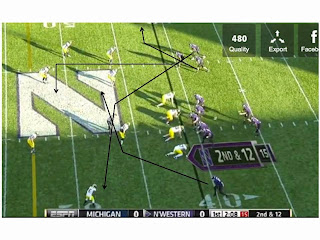 Michigan has a breakdown between the WILL and the CB to the single receiver side and Northwestern is able to exploit that (possibly the MIKE as well, as it looks like they have intentions of switching everything here). But this is an instance of Michigan directly adjusting to the bunch set.

Bunch 4-Snag vs Cover 1
Now remember that Michigan was beat earlier from Cover 1 on a drag and follow. 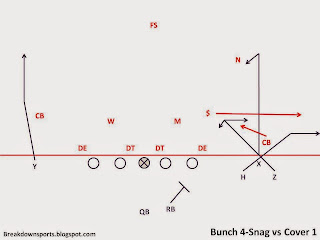 But this time the SS gets caught inside as Northwestern is able to successfully set the snag route to force him off his direct line. The roll out gives a shorter throw and also a slightly better angle, but it also prevents the QB from threatening to throw to some of the other routes, at least as accurately. 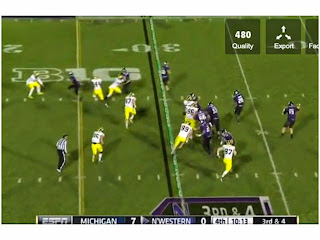 Stack Diagonal-Slant vs Cover 1
Michigan returns to Cover 1 against a similar look, but because of the situation they are going to make an adjustment with their FS. Rather than have him play the middle of the field (where there is plenty of wash with the LBs), they’ll have him stack over the stack bracket the biggest threat (in this case the slot). 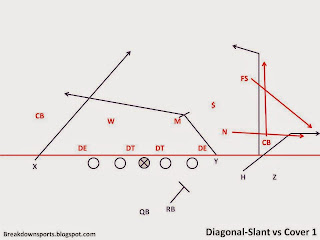 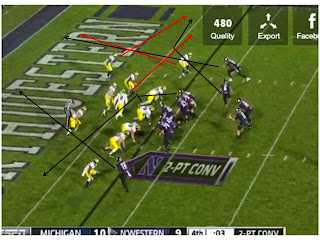 Note also that the CB here is able to prevent a free release, thus not allowing the slanting receiver to seal the FS inside. This allows him to scrape over the top and get outside leverage and shoot down on the diagonal route. 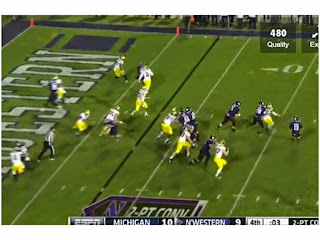 Northwestern is also rolling out hoping to induce flow from the Michigan defense (of which they are mostly successful, but not at the key position). You’ll note that the next option for Northwestern is the throwback to the TE, which is covered as well by the SS, and then Siemian slips and that’s the game.

Conclusions
I'm an unabashed bunch and stack formation enthusiast. I see these plays and I see how they help the QB read the defense and how they define the coverage and force defenses to make adjustments. In that way, you see how defenses are forced to remove defenders from the box, not because the offensive formation is spread, but because of the plethora of concepts and rubs and picks that can be established from these sets. In fact, one of the biggest things I like about these sets (not seen above) is that you can attack them closely to the formation as well. These concepts don't need to be detached, they can also provide additional defensive gaps in the run game, can provide great blocking set ups for the screen game, etc. So you see all the ways defenses are forced to adjust to just a few simple concepts, and you think "now what if we can run the ball?" Well, if Northwestern could adequately run the ball, then you're playing with anyone.
Posted by Space Coyote at 10:56 AM