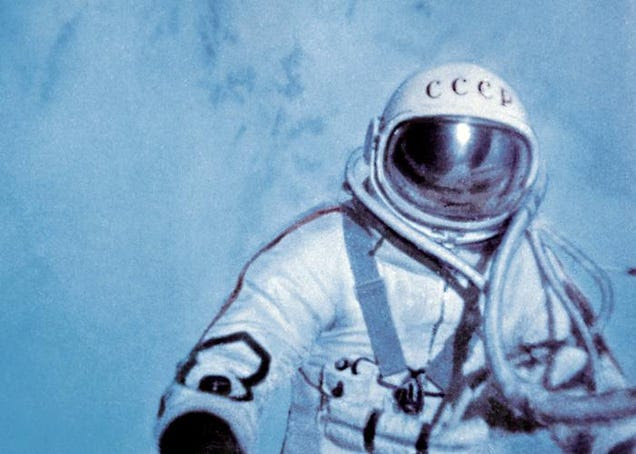 Hit the jump if you're interested in some discussion of Space Exploration for a brief interlude from our football talk.


50 years ago today, Russian cosmonaut Alexey Leonov stepped off his Voshkhod-2 spacecraft and out into the deep, dark void that is the vacuum of space for mankind's first ever spacewalk. This leap into the unknown marks a very important small step into our exploration of space and our exploration of mankind.

The story - like many of these early space exploration stories - is absolutely badass. His suit over-inflated and didn't function properly; yet, coming within moments of suffering a heatstroke and being hardly able to move, he remained calm, not informing anyone of the potential issues, because the world was listening and he didn't want them to hear.

He eventually had to let out pressure from his suit, exposing himself to the emptiness of space. Much like deep sea divers, he nearly suffered from the bends. As he deflatted his space suit so he could fit back into the airlock, it only made his gloves swell more, in a twist of cosmic cruelity.
Soaked with sweat, but back on board his return vehicle, the flight encountered more difficulties. While only in space for a little over one day, it was the even shorter return to earth that caused perhaps the biggest issue. As anomalies mounted, Leonov and co-pilot Pavel Belyayev were forced to tumble toward off course and into a thick forest during a snowstorm. Facing sub-zero temperatures, wolves, and bears, they had to survive the night, their sweat threatening to freeze in their now-unheated shelter, they managed to be rescued and ski out on the second day.

Of course, they had one of these just in case they had to hunt (cosmonauts, for a long time, carried guns on board all their flights in the event they became stranded):

Unlike most of his era, Leonov is still alive to this day. A badass among badasses, we look back at what "Space bitches, space" really means.