Inside the Playbook: Breaking Down Michigan's DL Scheme and Personnel

Recently on MGoBlog, Brian wrote a piece previewing the defense as far as his expectations. In the past couple days, he's also discussed the Defensive Line and looked at the recently released Michigan depth chart. A question keeps arising, unknowingly getting answered, and then asked again. It's a common confusion, and an understandable one when looking at nomenclature of football.


What is Michigan Running?
I agree with Brian that this is a 4-3 Under. Michigan isn't going out there with a LOLB and a ROLB, and they aren't going out there and doing a lot of two gapping (though a 4-3 under will often two-gap somewhere). It's a 4-3 Under with a standup end sometimes. Furthermore, the defense will not consistently keep two guys in two-point stances and shift the DL every which way, like Wisconsin's one-gap 3-4.

This is a 4-3 Under all the way. Let's remind everyone of the gap assignments:

And let's take a look at what a nominal 4-3 Under looks like, the one most of you are familiar with from the early Mattison years. 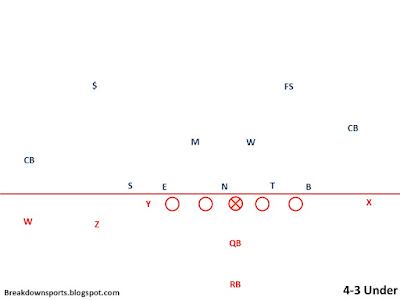 Here, we're going to call the Weakside DE (WDE, 7-Tech) the Buck (it's Buck because "B" stands for Backer, like how MIKE is for Middle in middle LB), to keep with Durkin's terminology. He is, in fact, more DE than LB, but he will occasionally drop (see image below). The strongside DE (SDE, 5-Tech) we will simply call the End. The 3-Tech we are going to call a DT (or tackle). The 1-Tech we will call a NT (Nose).


This is close to what Michigan is running, but not quite. Actually, the image above is closer to what Michigan will now run than what Michigan nominally ran with Mattison as the DC. Notice how Beyer (the SAM LB at the top of the screen) is in a loose position. For Michigan fans, this is similar to how Greg Robinson deployed Stevie Brown in his 4-3 Under, when Stevie Brown managed to have a very good Senior year. This is what we call a "Loose" alignment, meaning he's 5-and-5 (5 yards off the LOS, 5 yards outside the offensive EMOL). Ross, the WILL in the picture above, is also playing a Loose technique (in this case, it is to allow the dropping DE to play an inside zone or spy and to allow the WILL to play the outside Flat Zone, where there is more likely to be an immediate threat in the pass game).

With Ross, an undersized SAM LB, Michigan will continue playing more of a 4-3 Under Loose. 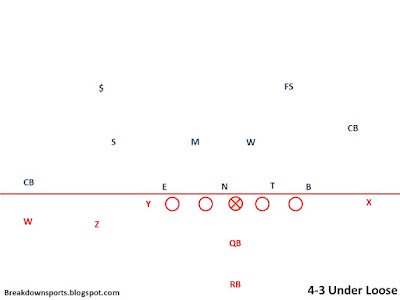 Many 4-3 Under teams traditionally move the FS down into the box as the 8th man and rotate the SS to the center of the field. They do this because the Buck and DT generally protect the FS from having to face any wash, something the ILBs (WILL and MIKE) are more accustomed to. It'll look like this: 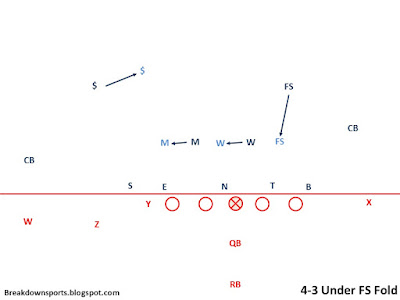 But Michigan won't be doing that as much this year. Instead, the SS (who always aligns to pass strength) will be the 8th man in the box. He can be inserted like this: 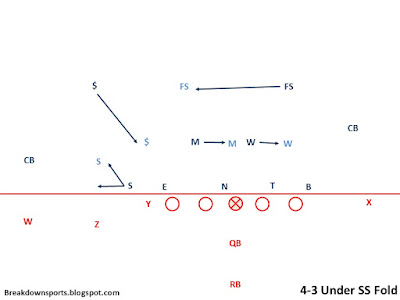 But more often he will align closer to this. 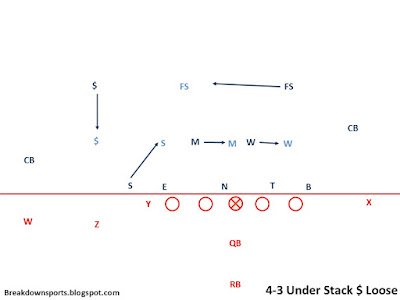 This essentially makes the SAM another ILB. He's protected a bit by the End, and the defense won't get out flanked because the SS holds the edge and the SAM can work over the top to provide additional support.

Wormley and Henry Primer
As a primer, Wormley is a guy that came in as a projected SDE. He was expected to be between 270 and 300 lbs. He has good straight line speed for his size and displays excellent burst when he's comfortable with what is in front of him. Unfortunately for him (and fortunately in some ways), he's also very long and tall. With hesitation sometimes coming when he has to take blocks from different angles, he often stands up. This leads to him struggling to handle doubles.

Henry on the other hand, was always a DT. He was projected as a slashing, penetrating 3-Tech that could also slide down and play the Nose if needed. He's more of a squaty player, but has the first step to beat OL to the spot he wants. This first step quickness gives him potential to be a two-gap player, and his squaty build also gives him the stout base to prevent him from getting clobbered when he's forced to choose one of two gaps. He also stands up too high at times, but has the strength to fight back against it.

Brian previewed these guys well in the DL articles linked above, and there is video there to demonstrate these traits in these players.

So Why The Position Switch

The Double Team
As I said, it's been explained, but never really answered. But the answer is quite obvious once it's pointed out. Wormley struggles more against doubles, and the 3-tech will almost never get doubled. The 5-tech will get doubled, possibly on about half the plays, especially with the way Michigan will align. 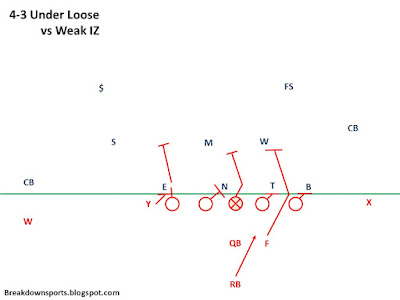 Notice the 3-tech isn't doubled on the run his direction.

This means that the 5-tech has to hold up to double teams quite often, it also means the 3-tech can simply be let loose to be a penetrating force on the interior. If you can get that out of your 3-tech, you cut off half the field and give the Buck a lot more options as a pass rusher, because he doesn't have to be as preoccupied with the rush.

Whether the SAM is in a Loose alignment or inside, initially, the 5-tech will often get doubled against zone based rushing attacks. 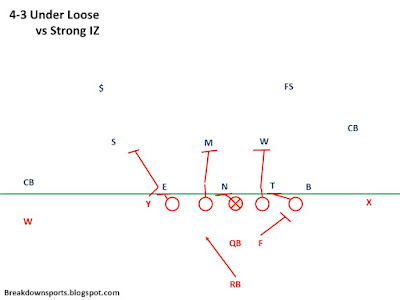 Here, the 3-tech is doubled, so he has to be able to handle that a bit, but the double likely doesn't last as long as the OL tries to get out to the WILL, and it is on the backside of the play.

Against man blocking schemes, he'll get doubled on essentially every strongside run (Power O and Counter F, for example) 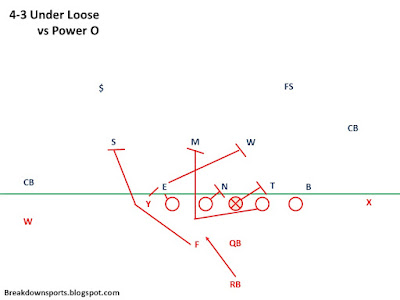 He has to hold up at that position for the rush defense to have success. If he doesn't hold up, he gets washed into the ILB, and large creases in the defense form, particularly when the SAM is playing in a Loose alignmnet.

Two-Gap Player
But there is one more thing that 4-3 Under teams tend to do. From Pete Carroll to Will Muschamp (and I'd assume Durkin), these 4-3 Under coaches love to two-gap with the 5-tech, meaning they'll line him up over the top of the OT (4-tech). 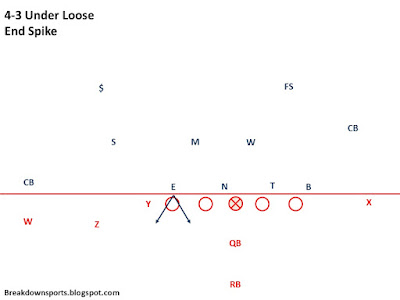 It is from this End position that Seattle deploys all-everything Michael Bennett, and why they drafted Frank Clark to be his backup. It's a guy that can slide inside or play outside. It is a guy you can play games with while keeping the base of your defense the same. Keep things simple for the 3-Tech and let him attack, but get a 5-Tech that can do a little bit of everything.

This scheme has been described well in several places (here, here, here, here). That is what Henry is going to be asked to do on normal downs and distances. It is likely that Henry slides back inside on passing downs in some instances, as Wormley is the more natural outside rusher. Both may play inside and another Buck come into the fold. But this is why Michigan's depth chart looks the way it does today.

In this way, the DE can get more involved on a run away from him 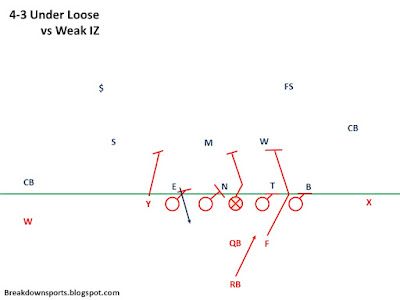 He can also confuse the blocking on runs his direction, a set up the MIKE to beat his blocker to the spot he wants to get to in his run fit. 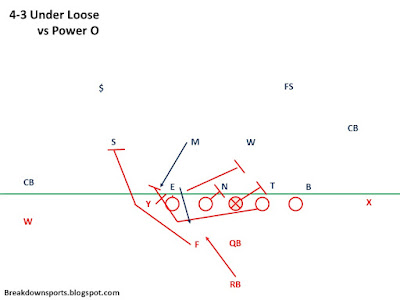 The ability to two-gap allows the End to blow up blocking assignments at the point of attack (think of an opposite side blocker trying to trap him, he can easily see it coming) or squeeze inside a block and make a play in the backfield (think of the OG to his side pulling away and the End blowing up the run from the backside). Either way, he is able to be more instinctual and be more involved, and the MIKE can correct him. This also helps him be more fluid and instinctual in his pass rush. Of course, this does take a player that can handle doubles, read plays, and still be athletic enough to make plays. Michigan is looking for Henry to be that guy.
Posted by Space Coyote at 6:05 PM