Inside the Playbook: Wisconsin's Flood Play

The last rollout play we are going to look at from Wisconsin (for now) is a basic sail concept. I’ve previously discussed how they’ve utilized swap boot (in two parts), in which TEs are primary attacking the flat and underneath off of delayed routes. With the sail route, they now have an opportunity to work vertical to threaten the deep outside of the field. 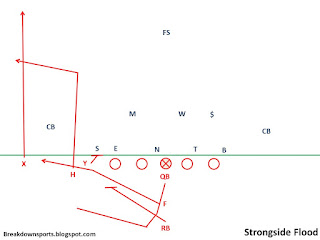 The QB in this case is merely going to read deep to shallow. The Go route is going to act as an alert: if it’s open you immediately take it, but you work off it quickly because it’s more a route to open up space underneath it. The TE here is either going to come from the frontside or backside, work vertical to threaten the seam, before breaking outside toward the sideline at about 10-15 yards. There is then a back coming underneath and working toward the flat. These last two routes form a high-low read on the flat defender and a relatively simple half-field read for the QB.

Examples
In this first example, Wisconsin is lined up near the far hash mark. To allow the routes to get to the far side of the field, that means Wisconsin is going to want to run a strongside sail concept aligned to the field. This puts the route runners nearer the middle of the field and makes it so the timing of the play isn’t too delayed.

The WR to the field is going run a go route and try to get over top of the defense and force the safety to help. Fairly simple, as he is only an alert option if he immediately wins over the top with his route.
Here, the Wing-TE is going to work vertical up the seam before breaking out at about 10 yards and gaining ground to about 12 once he reaches the numbers. The TE aligned inside of him (covered by the WR) stays in to block.

Wisconsin is in an I-formation and fakes the handoff to the RB, who stays in to block. The FB, meanwhile, runs an arrow route into the flat.

Because there is an active attempt to at least look for the deep throw, and because the QB is rolling away from his throwing hand, Wisconsin modifies this a bit to run a bit of a half roll and continue to work toward that sideline. He sees that the TE is able to get body position on the smaller DB, and the QB makes a good throw to the sideline where only his receiver can get it. 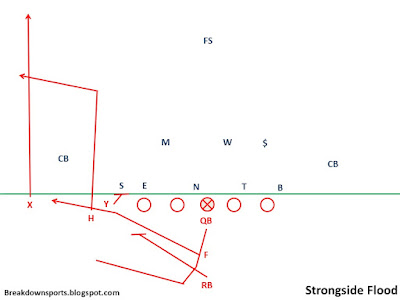 On this second play, they are going to work back into the boundary, so they align the strength to the field and run a weakside flood.

The WR here runs a Go route pulls off the CB and forces the FS to help over the top. The Y-TE aligned in a bunch on the far side runs a cross to 10-12 yards is open. The flat receiver comes underneath the route to form the high-low threat. Also note that the WR aligned in the bunch runs a short post in which he gains some width with his stem before breaking back to the middle of the field. This can be used as a final option in the event the coverage rolls heavily to the sail concept and the FS has vacated the middle of the field. He’s going to work his MOFO/MOFC rules and run the post/seam from this spot as a throwback option. 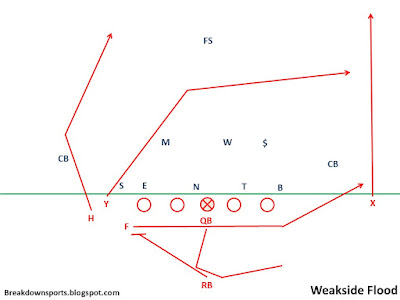