Nebraska struggled to get much traction on either side of the ball against Michigan the past weekend, but it's not necessarily due to a lack of interesting scheme. On their first drive, they ran this interesting little wrinkle. While I liked it more before I dissected it further, it still is a nice scheme that could have likely resulted in a TD had it not been tipped by a DL. So let's take a closer look. 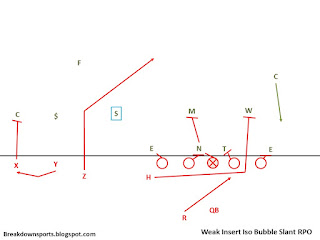 Insert Iso
One of the big fads in college football recently has been the "Insert Iso" play. The idea is effectively the same as the traditional isolation play. At the first level, the OL will man/gap block with doubles and work up to the second level defenders that aren't being Isolated. The play name, Iso, comes from a specific linebacker being "isolated" by a lead blocker. 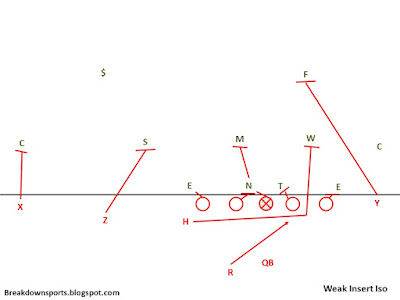 Insert iso inserts an H back instead of a FB. The H-back will typically start offset, often in a wing position, and insert him through the LOS up to his second level block. This is very much a downhill run scheme, and the best way to stop it is to meet the isolation blocker hard and fast in the hole. But with the cross formation movement and the relative new development of the play itself, many LBs are hesitant to get down hill based on any one key too quickly. 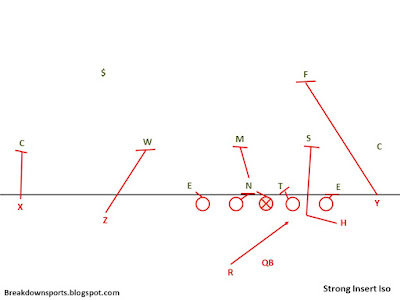 Insert Iso RPO
As I said, the best way to defend an isolation play is to meet the lead blocker in the hole. Plug the hole, and it becomes very difficult to find space to run. This is very much a fast, downhill attacking play, so reaction time is fundamental.

Back in the day, the means of taking advantage of that defensive reaction was to throw the pop pass. Give the quick look of a run and pop the ball right over the LB's head and in front of the safety. While the pop pass has come back into fashion a bit as of late, a more viable and popular way of taking advantage of this movement is through an RPO. The quick, hard response to Iso gives the QB a relatively clean second level read. 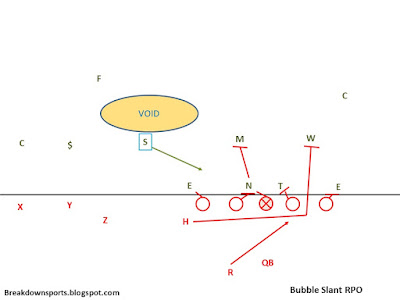 Bubble - Slant
It's long been a favorite of teams that run bubble screens to pair the screen with a slant route. This can be done with the guy that is nominally a blocker or a guy inside the bubble action.

Let's look at three ways this works and briefly explain each. 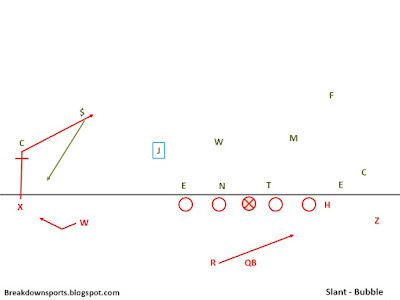 This method will take advantage of defenses that try to leverage the bubble receiver with two defenders, the outside defender providing leverage and the inside receiver chasing. Here, the slant receiver will bluff a block as he would traditionally for a bubble screen, before breaking inside. 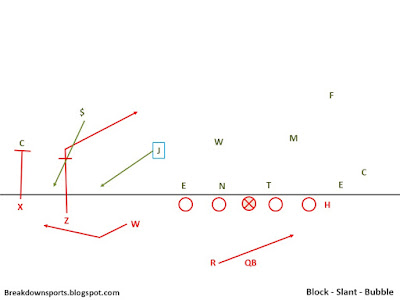 Here, the slant is coming from the #2 receiver, who, like in the previous example, can first bluff his block. The advantage here is that you are still getting a bubble option between #1 and #3. With a trips formation, you are also more likely to be running the slant against a safety or LB, depending on the defensive personnel, rather than a CB. This makes it more likely that the slant itself can break open.

On the downside, the playside safety will often have over the top support of #2, and may be able to cut the slant. If the safety support is over top #3 and he's reading bubble, it may put his reaction to bubble right into the throwing lane of the slant. The spacing can also be off on the blocking which can negate the viability of the bubble option itself. 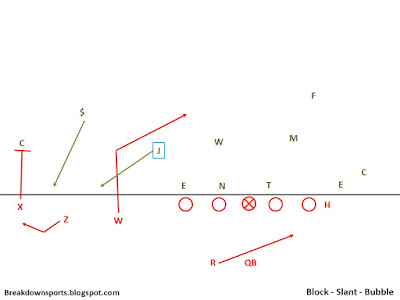 With how most defenses react to trips now, you are almost certain to get a LB in coverage on #3. Furthermore, because defenses want to maintain box numbers, that LB is often going to be an a sort of apex position. Being the inside most receiver, if the playside safety has over top help, the slant can likely still beat him inside as that safety can't maintain leverage. If the safety help is coming from the far side safety, he likely is more focused on getting over the top to negate the vertical route. When paired with an RPO, it directly works against the backside LB, the read defender that is put in conflict whether it's zone or man. It also maintains the spacing on the bubble option.

On the downside, it can put you more to the middle of the field, and if the defense has a good idea of it coming, they are more likely to be able to cut this from the far side of the field, which may be particularly dangerous against teams running Cover 1 and bringing the weakside safety to cut any crosser/slant. Another downside is that you aren't typically bluffing anyone here because the LB doesn't need to chase the bubble to hold it down. So theoretically, without that bubble conflict, the LB can stick in coverage. 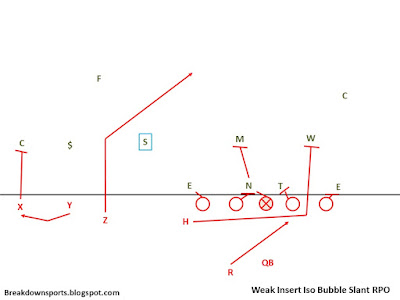 In theory, there is a lot to like about pairing Insert Iso with this slant bubble. As noted, it gives a quick, downhill run play and allows you to read the backside LB who is directly in conflict with run/slant. However, insert Iso forces your H off the LOS (unless you are confident enough to fold in a Y-TE. If you keep in a RB, have another back off the LOS, and a trips formation, this means you will be forced to cover a receiver by alignment, thus not allowing him to work down field. This is slightly problematic but not necessarily a killer.

Here's one point in the benefit of this covered alignment. Typically, it is going to clear out a weakside player. You effectively have a quad formation to the wide side of the field, and the defense will typically adjust by shifting a safety or CB to that side of the field because even if one of the receivers can't get vertical, the defense still needs to be gap sound and needs numbers to the quad in order to account for the gaps. That leaves one DB weak, and he's there typically to maintain some outside leverage to the weakside of the field and protect against the eligible OT. So you've reduced that cut threat in some ways unless the defense is smart about their coverage. 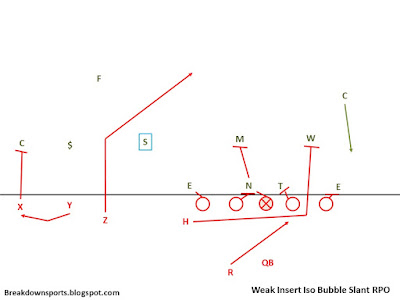 To the quad side, the bubble-slant action is great at dealing with the strong safety. As more teams include the safety to help against the bubble screen, by running slant from the inside, you often gain leverage on this defender who is buzzing down to defend the bubble. So the bubble effectively widens the defense to the field and parts the seas in the middle of the field, as long as the weakside DB doesn't cut the formation. 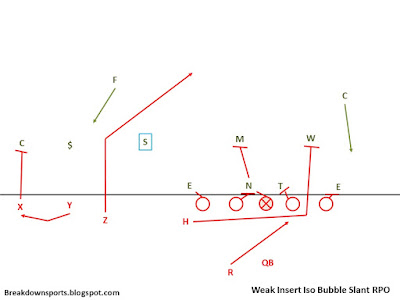 However, there are downside to the alignment that I think can potentially de-conflict the defense. Because you have a covered WR in the quad, if this is recognized, the strong safety can effectively cap the uncovered slot and cut anything that he runs vertically, like a slant. Because of the shotgun formation here, the bubble also doesn't get enough depth, which makes it difficult to make it a real read on the conflicted strong safety; you are relying on the slant coming open, not reading the defense more than an RPO. 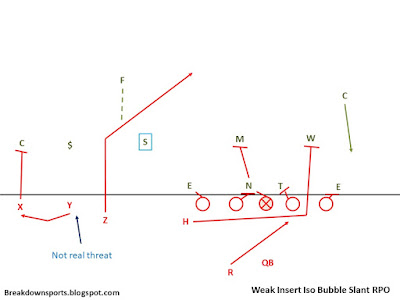 Similarly, if the weakside DB is smart, he understands that any release of the OT vertical needs to be paired with a quick pass concept because of the pass rush getting home quick vs less OL blockers. This means it is just as easy to have the WILL cover him. This means that DB can actually work over the top more of the quad. 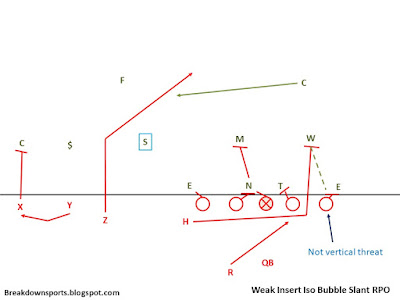 Another possibility for the weakside DB is to insert himself down, and thereby killing the numbers advantage that is supposed to be provided by the RPO. 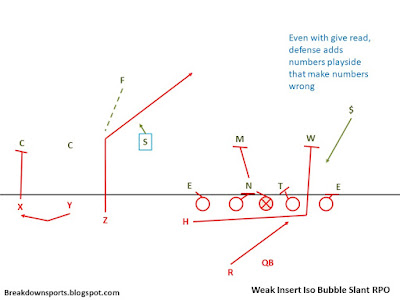 Better Pairing for Bubble-Slant RPO
My feeling is it makes more sense to run a traditional 3x1 formation RPO and run a basic zone or Power run scheme paired with it. A play like Power will similarly stress that backside LB, who will want to scrape over the top of the formation. The single TE will force at least one DB for coverage, if not two, and potentially mitigate some of the coverage concerns related to capping the slant and are more likely to be able to "part the seas". 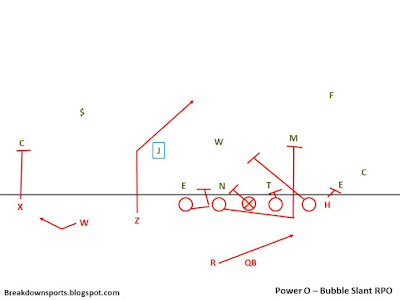 That said, the major downside with the balanced formation is teams running a traditional trips adjustment known as "Solo" that can theoretically hold down all options here (and given it's a slant from #3, not a hitch, he could run right into the coverage). 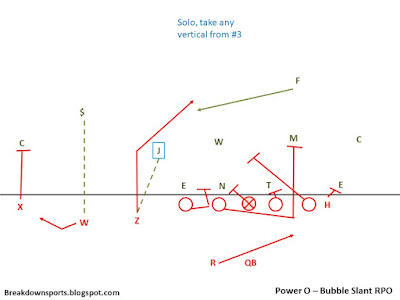