Film Review: OSU vs PSU, 4th and 5 Inside Zone RPO

Whoa boy is there some people given Franklin thee ole business for his call to go with an Inside Zone - Bubble RPO on 4th and 5 on his final possession last Saturday. I mean, his own fans were calling him out on the way to the locker room and he was ready to have a nice, pleasant, parliamentary debate about the grievance. So what were Franklin and offensive coordinator thinking Ricky Rahne thinking with that call? Let's at least try to give them the benefit of the doubt and take a look.

The Logic Behind Long Conversion Runs
Run calls on long conversion attempts are hot fodder for fans when they don't work. The words "you have to throw it past the sticks" get repeated ad nauseam as if God had come down in the year 1990 and written an 11th commandment in stone. Almost certainly you hear fans complain that the offense is just "conservative" and that they might as well "give up and punt".

Certainly, on a play-to-play basis, passing for the first down during long conversations is the higher success rate strategy. At the end of the day, in major football, it is typically very difficult to pick up 5+ yards on a single run play. But it's also generally pretty hard to do so on a single pass play, and prior to the "last series of the game", running on 3rd and long can be very effective and smart game strategy.

Why?
From a game theory point of view, the threat of these things can mitigate the defense's advantage on on long conversion attempts by catching them off guard and by preventing them from selling out on pass on later conversion attempts. The worst that should come of a run on 3rd and long is a kick, and better yet you may get close enough to the first down marker to go for it on 4th, if not pick up the first.

Now, notice in the last few paragraphs I explicitly said "3rd and long". That's because the worst that comes from an unsuccessful run is a kick. Depending on your position on the field, a 4th and long run can also have it's place, but you have to be confident in the defensive tendency and understand that by not getting the 1st down, you are forcing a long field for the opponent. But these moments are exceedingly rare.

The Logic Behind a 4th and 5 Run on the Last Series
So what's the specific logic that went into the PSU play call that effectively ended the game on Saturday? Almost certainly, a part of that logic is "what do we feel is the best conversion play with 5 yards to go." But that answer is very different if it's 3rd and 5 in the 2nd quarter than 4th in 5 with a minute left. Almost certainly, without fully grasping it, too much "successful game theory" weight was placed on that final play call than "successful play theory". But that's not to say that the Penn State coaching staff was blinded by forward thinking rather than acknowledging the play they thought was going to get them a first down. 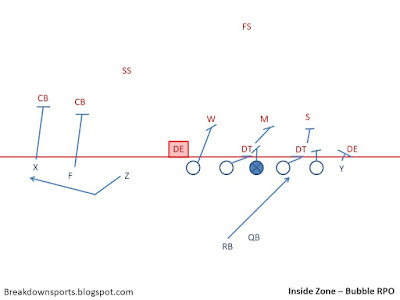 How could the Nittany Lions staff believe an Inside Zone RPO was the best option on 4th and 5? There are at least two reasons why the PSU coaching is confident in their ability to execute it and at least two more reasons why they like the play call from a schematic perspective.
So Schematically There is Some Rationale
Yes, and OSU appeared to think so too.

Let's look at point 3 from above first. Line stunts and front games. The easiest way is to show an example. One popular line stunt in a "pass situation" is an EX stunt (End 1st, Tackle 2nd) 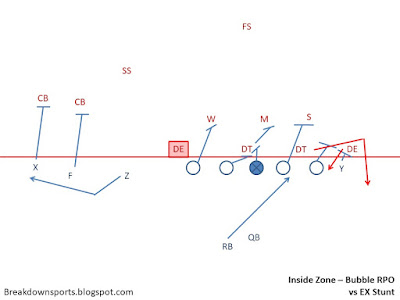 OSU has some athletic tackles. By running this stunt, you are collapsing the pocket by pinching the DE and maintain rush lanes with your DTs by looping outside, it becomes very difficult for the QB to escape contain. But against the run, you are effectively adding a massive bubble to your front. You are allowing a free release to the LB. And the looping DT effectively runs himself out of the play. 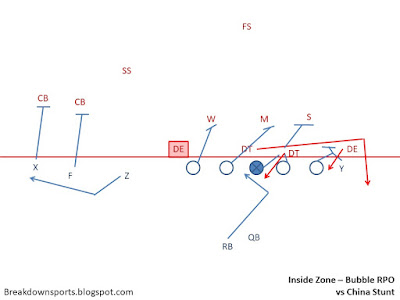 And any additional interior looper has the same impact, whether it is a TT stunt or a China stunt. You are creating a natural bubble for the offense to attack with their IZ run scheme and likely a free release to the second level. And because it's not man/gap blocking, the offense just picks off who enters their zone.

And what about pressure coming from the second level? Just like this formation ultimately did, it just takes away from the defenses ability to get gap sound post snap. And with an aggressive blocking approach, it's more likely you pick off second level blockers than line stunts. 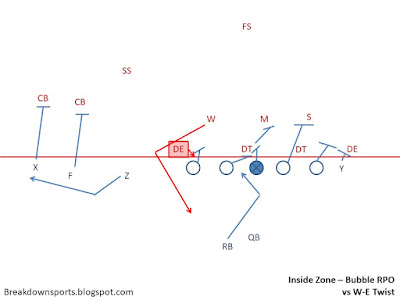 Effectively the defense plays itself out of gaps, allows more movement because of their own momentum, and can be sealed off to allow for large run lanes into an open second level. 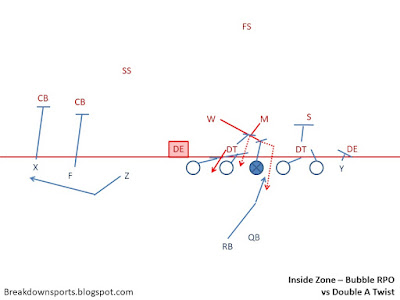 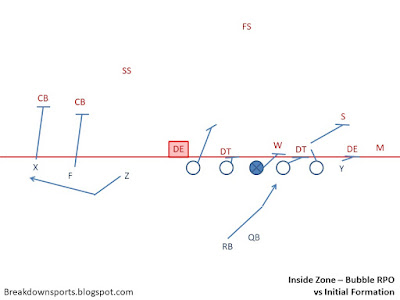 Then they shift into something more balanced, but remain tight to the LOS. This almost certainly limits the double teams because of how tight they are, but as an offense I'm taking my odds of an interior OL being able to move and seal a LB and creating a run lane in the first level. 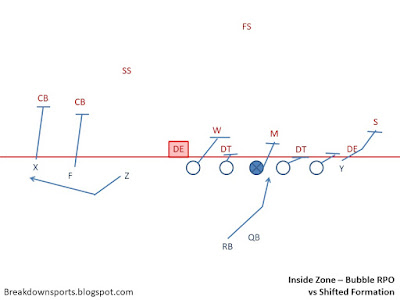 So it's not easy, it never is, but based on formation and tendency, there is some logic here, so much so, that OSU effectively called a play to stop it.

But in the end...
In the end, run in that situation is still a bad play call. Why? Because it's just too difficult to pick up 5 yards on the ground and be confident getting it. There is no game theory, it's succeed or go home. And your odds are just too small. Now, it is an RPO, so there are some options, that said, the play call itself is predicated on you anticipating the defensive play call. Yes, the RPO can be successful if the defense does this, this, or that. The problem is, if they do this "other" that you didn't anticipate, you're dead in the water. That doesn't happen on a pass play. Yes, pass concepts are designed to work better against certain coverages, but they also always adapt to at least give you a chance.

And in the end, OSU dialed up that "other" and the play was dead to rights, as no options were good options on this RPO.
Posted by Space Coyote at 7:23 AM