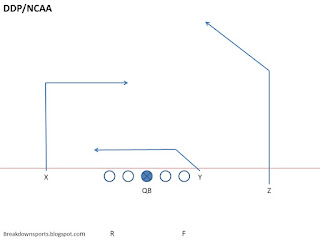 Basic Concepts
To attack the middle of the field, we're essentially going to look at two concepts: The NCAA Combination and the Mesh Combination.

The NCAA combination, also known as Dig-Drive-Post (DDP), includes those three routes in combination. Together, it works to attack three different levels of the defense where generally there are only two levels to the pass coverage. This gives the QB well-defined reads straight over the middle of the field and forces the defense to choose whether to step up and cover the guy in front of him, or drop behind and cover the deeper guy. Likewise, in order to defend it, it forces the defense to find the guy on the opposite side of the field or otherwise cover a guy crossing the field, because all three routes in this combination have the ability to threaten not only vertically, but horizontally with its movement. 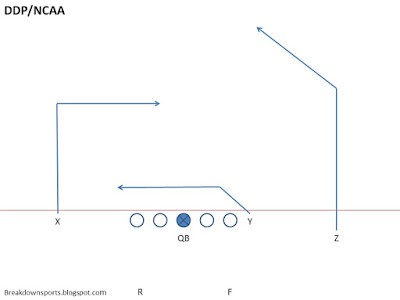 NCAA Concepts
Let's begin by looking at the 6 basic NCAA combinations. What you'll notice is that we'll borrow terminology from earlier route concepts defined in the twins route concepts and TE/Flanker route concepts. What does this mean for us? It means your players are capable of expanding their threat with new concepts by simply incorporating concepts and combinations they've already learned. In other words, they threaten the defense in another way by expanding what the coverage sees without having to expand what they actually do.

Because the basics of what the NCAA Concept tries to do, I won't go into as much detail with each concept as I have previously, as that information can be found above and in the other route combination pages.

NCAA Cab
This combines a Cab Concept on one side with the TE (or opposite side receiver) running a post or a Middle-of-Field (MOF) route that is a post when the MOF is Open (MOFO) and a seam when it is closed (MOFC). By including "NCAA Cab", the MOF route can be implied. 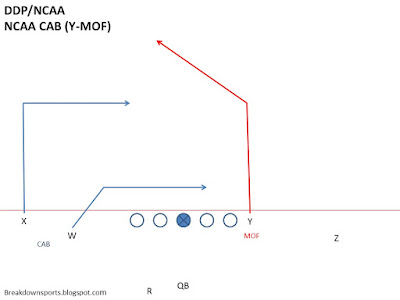 NCAA Crash
This combination combines the basics of the Crash concept with a receiver from the opposite side running a MOF route. The MOF route can be implied. 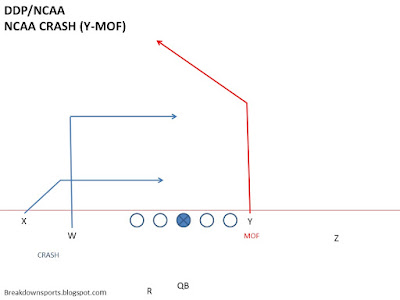 NCAA Crease
Combining the Crease Concept with a Drive route from the opposite side of the field. The drive route can be implied. 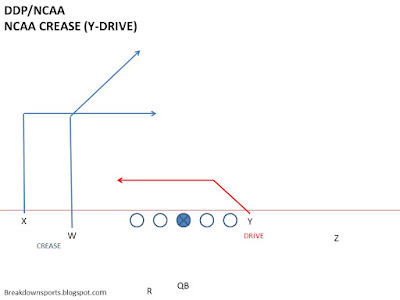 NCAA Mills
Combining a Mills Concept with a drive from the opposite side of the field. The drive route can be implied. 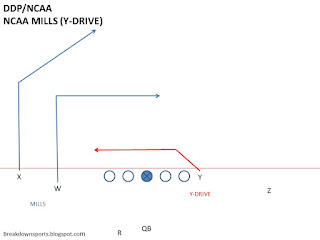 NCAA Hi-Lo
The Hi-Lo Concept, sometimes referred to as "Cadillac", is a combination of a drag from one side of the field and a dig from the other, forming a natural threat above and underneath the LB level of the defense. Combine them with a post route on the outside, and now you have "NCAA Hi-Lo" (the post can be implied). 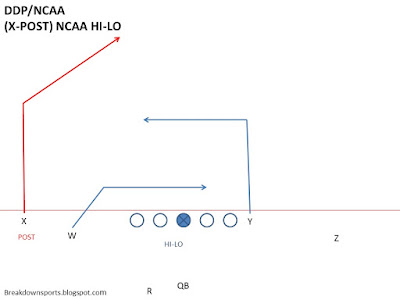 NCAA Levels
The one NCAA route with its own name, sometimes referred to as "Zipper", it has a natural underneath rub as the outer-most receiver runs the drag route, and the slot runs deep. This forces safeties to cover the slot in space and the LBs to get depth to cover the TE. Naturally, the speed of each player and where they are coming from naturally allows them to threaten the middle of the field near the same time. 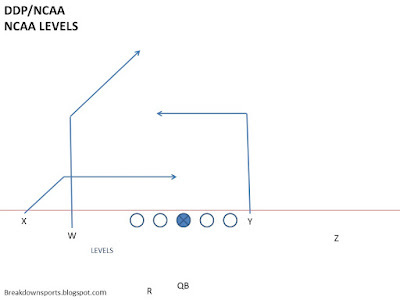 Putting It Together
So, obviously the NCAA concept only includes three receivers, and you can have up to 5-eligible receivers. What do we do with the others? Well, you can simply call out the route of a 4th or 5th WR directly from the route tree. Below, we combine the NCAA Mills with a hitch route from the outside receiver. 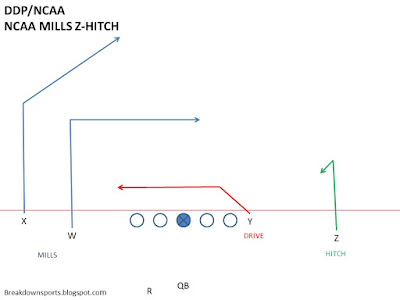 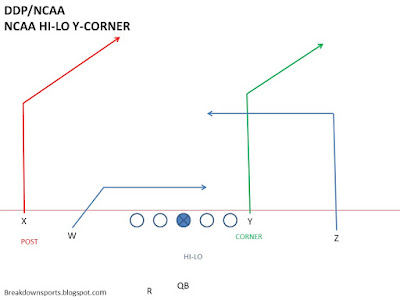 Now, these combinations can also be run from trips formations, simply by naming the third receiver in the trips set that'll run a route that isn't a part of the NCAA combination. We'll get into trips and bunch combinations at a later time though.

The more of these you draw, the more you realize we aren't necessarily crossing new territory though. From a 2x2 formation, you start to see that in many cases, we're only combining two different route combination. Below, you can call something "NCAA Cab Z-Go" or you could call it "X-Cab Y-Streak-Seam" (by calling out the receiver on the LOS, you determine which side the combination takes place on), they mean the same thing. 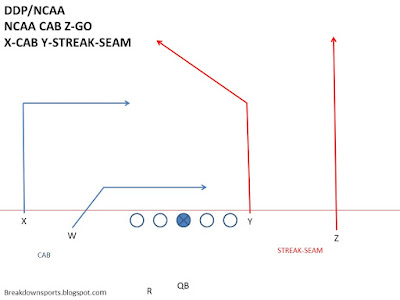 And this can happen with both the inside and outside receiver on the opposite side of the NCAA combination. 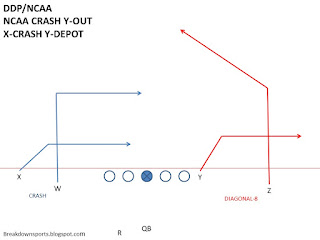 Progression
Strictly from a progression standpoint, the typical progression for this route combination is deep to short, with the post being the first option, the dig the second option, and the drag the third option (the 4th receiver can be an "Alert" throw, or a throw if he break wide open because the coverage breaks down, but will mostly be used to simply hold the defense). I prefer to teach movement keys, as it defines what the QB reads better than arbitrarily saying "throw it to a guy if he's open".

You will hear it coached differently in different places. Some don't refer to the first read as the safety to the post side, instead, they tell the QB to "peek" to see if the post is breaking open before moving onto the dig/drag portion of the concept. This "peek" is typically limited to two high safety coverages for this concept (this means against a single high safety, you wouldn't throw the post).

To me, that's a bit too undefined. So you can break up your progression one of two ways: 1) Dig-Drag first; 2) Tunnel vision.

Dig-Drag First
The dig-drag first method of going about the progression essentially uses the "peek" concept but in more defined means. The first read will be the hook defender (typically a LB, but sometimes a safety coming up from the back line of the defense) opposite where the drag route begins. This means that the dig-drag is the primary threat for this play, indicating that the majority of the time you will be throwing a short or intermediate pass. For this, the movement key is simple: if the hook defender is flat-footed and drives on the drag, you throw the dig, and if he's retreating, you move onto a second movement key. 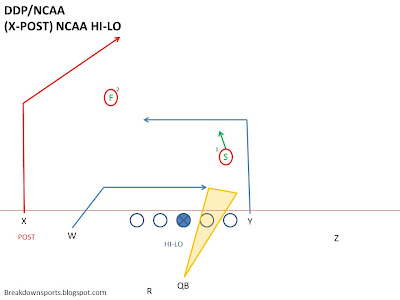 This second movement key will be the safety toward the post route. More often than not he'll continue on with the post receiver, so the QB should throw the dig, but in the event he tries to drive on the on the dig, the post should come open over the top. 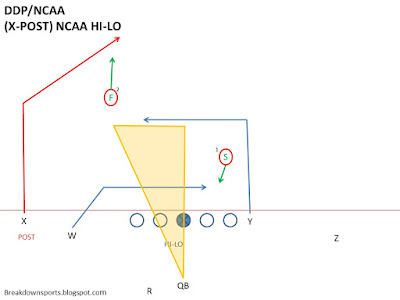 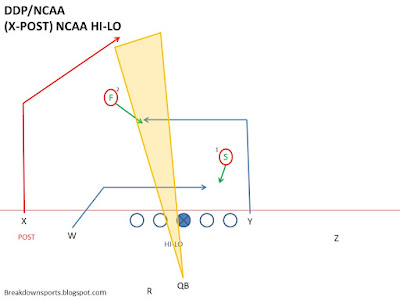 Both the drag and dig routes are taught such that receivers can settle in voids in the zone or continue on against man, so the QB only needs to "throw the receiver open" and they should be seeing the same thing. Receivers should learn to settle such that the QB has a clear throwing window and doesn't have to throw over the defense to make the throw, thus allowing him to throw the ball on a line and accurately and not worry about getting the ball over or through the defense.

Tunnel Vision
For this method of teaching the progression, the first movement key should be the safety to the post side. The Post being the first read and earliest in the progression, that safeties movement forward or back can be identified so that the timing of the routes allows for the dig to get underneath him by the time the QB gets off his first read. 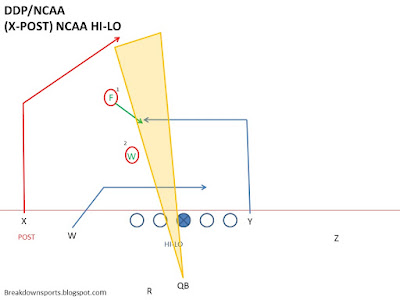 Now the dig and drag are both taught to settle in open voids as they cross the field. Combined together, the dig and the drag provide a natural high low on the 2nd level defender in the hook zone. In this case, the second movement key to be the hook defender to the post side of the field. This maintains the levels theory, as the QB doesn't need to move his eyes out of the tunnel. For younger QBs, the most difficult thing to do is expand the tunnel vision to see more of the field; this route combination mitigates that concern, as all reads are made in the same tunnel. If the hook defender drops back into the dig depth, find the drag and throw him open (he should settle in the void or continue outside against man coverage); if the hook defender gets flat footed and drives on the drag, throw the dig open (again, the dig receiver should be able to settle in an open void so that the QB has a clear throwing window). In my opinion, that's the simplest way to teach it. 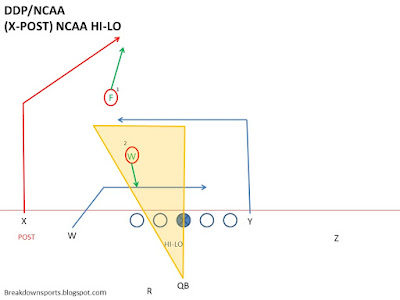 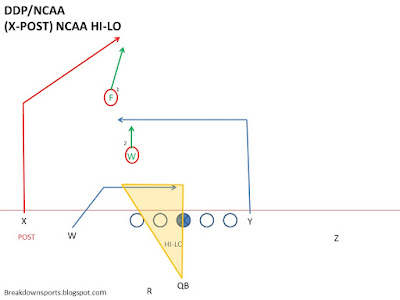 
Conclusion
What I like about this route combination is that it attacks the middle of the field but still gives the QB fairly simple reads. The middle of the field is congested, simplifying the game for the QB is essential. Furthermore, it attacks the defense at multiple levels, providing both the big play threat and the short, consistent gains that move the chains. To add to that, those threats can come from three different receivers, forcing the defense to respect the fact that any player can attack them at any level of the defense. Based on the ability of your QB and the philosophy of your team, you can also adjust the progression to better suit your demands. Inward breaking routes allow your QB to drop straight back (thus, initially threatening the entire width of the field at the snap) and allow for shorter throws, and that's an added benefit to running these concepts over the middle. The ability of both the dig and the drag to adjust to the coverage allows this concept to be successful against any coverage. And with only three receivers needed to go into a route, this can be paired with weak play action as well. That's why this is a great catch-all route concept.