The next combination we'll look at - along with its derivatives - is the Mesh Concept. The Mesh concept is an Air Raid staple that is so successful that it's found its way into almost every offense. It includes the threat of the two drag routes in combination with a natural rub in the center of the field. This makes it very difficult to defend in man coverage, as the defender (often a LB) has to cover the width of the field and run with a receiver in space while not only avoiding the natural wash of other defenders, but the "rub" that comes from the receiver running a drag route from the opposite side of the field. Likewise, it's difficult for zone defenses to cover it as well. Once the receivers pass the mesh point, they can sit down in any open void of the defense. This not only essentially overloads an area generally close to the QB (allowing him to make quick, accurate throws, so the windows can be generally smaller), but forces the zone defender to quickly identify the receiver coming from the other side of the field so that he can close that window fast enough so that the QB can't hit the receiver. But crash too hard, and the receiver can run right past and into the next open void underneath. 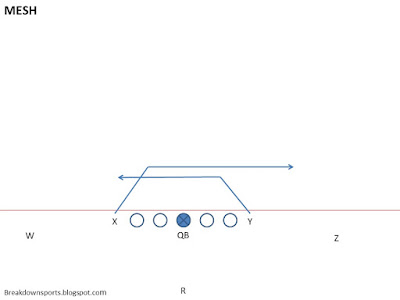 Unders is merely a mesh concept coming from the two outer-most receivers. 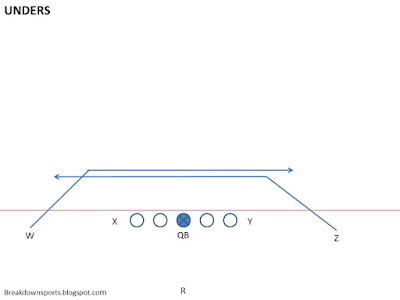 Overs is the same as Unders, except that it takes place deeper on the field. Some teams (Penn State under Bill O'Brien comes to mind) will run a Deep Mesh with their TEs as well, working much the same as "Overs" but with inside receivers. 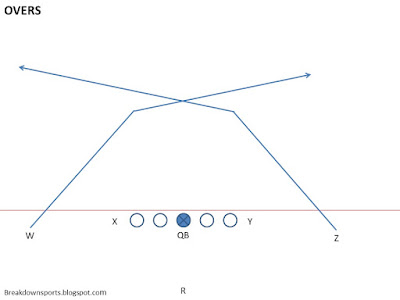 Deep-Mesh is similar to Overs but with inside receivers. 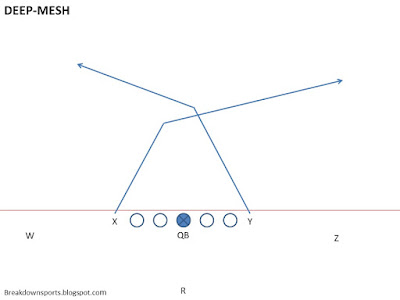 Lastly, Mesh-Out concept threatens the Mesh concept before breaking back out to the outside. This forces the defender to watch the receiver all the way across the field before identifying the receiver coming back his direction; peak early to the opposite side of the field, and the Mesh-Out can attack a defender not covering the guy immediately in his zone. 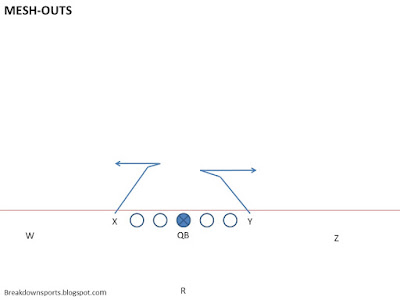 Mesh Concept
Moving on to the mesh concept, we see the same thing. Mesh typically implies the two inner most receivers. You can simply define the routes of the other receivers by calling them out from the route tree.

Mesh Snag
One of the favorites is to add a snag route to the mix. By combining the mesh concept with the snag route, you really overload the middle of the defense, and LBs often times aren't capable of handling three defenders all crossing into and out of their zones, not to mention all the wash they must fight through in man coverage. 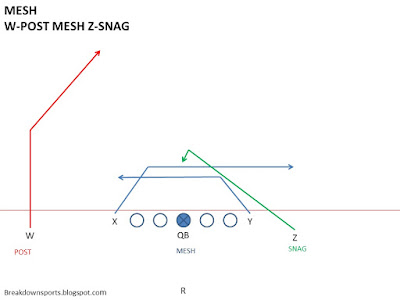 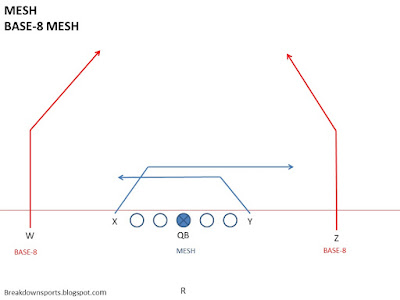 Combining Mesh and NCAA
Because the "NCAA concepts" includes a drive from a single receiver, it naturally complements the "mesh concept". The mesh concept threatens underneath still, and the remaining two routes naturally threaten the vertical levels of the defense. They all easily fit with one another and still naturally work within a QB's natural progression. 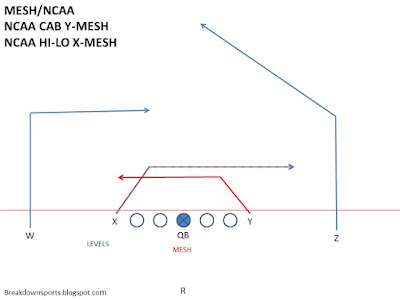 Using an Outside Receiver to Mesh
At times, you may want to mesh an inside receiver with an outside receiver. No problem. Nothing changes except how you call out the play, just like using an outside receiver in the NCAA concept. Below, we combine an "NCAA Cab" concept with a mesh concept. Notice, we say "Z-Mesh" which defines the Z-WR as the unused receiver in the NCAA concept. This means the X-Receiver side of the field runs the "Cab Concept." Of course, coming from the other direction, we could also call this play "NCAA Levels X-Mesh", and it would mean the same thing. 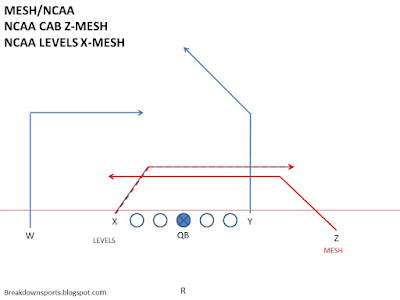 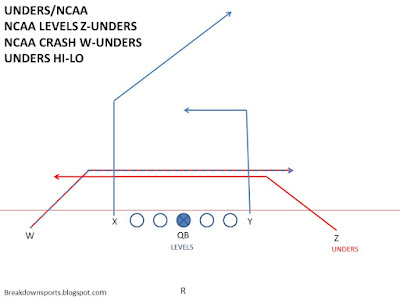 Unders Combination without the NCAA Concept
At times, you won't want to combine the Unders concept with the NCAA concept. That's fine. A post-corner combination from the interior receivers makes the "Unders X-Post Y-Corner" extremely dangerous, particularly against two-high safety teams. It forces the LBs on the opposite side of the field to identify the crosser all the way from the opposite side of the field. The Post-Corner combination puts pressure on the safeties as one safety gets pulled out of his zone by the corner and a receiver fills in behind the vacating safety. On top of that, a natural high-low to the outside with the corner and drag route to pick on the CB in the case that the CB is sinking (such as in Cover 4 MOD). If the defense over rotates, then the last option (the drag against flow) provides a dangerous dump off threat. Get a WR one-on-one with a LB in space and no help over the top and threatening things can come. 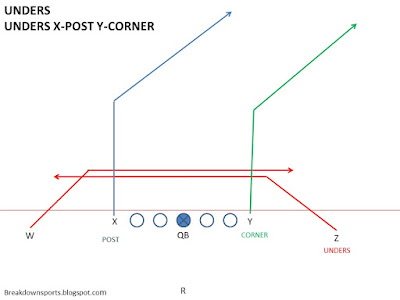 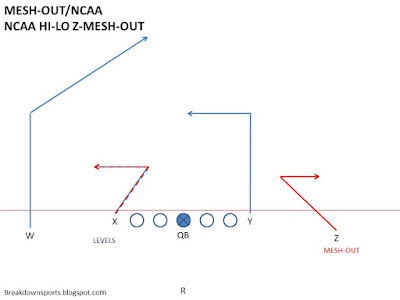 Combining the Mesh Concept with Two-Man Concepts
This is perhaps the most utilized version of the mesh concept, because it can add a well defined progression while overloading one side of the field. Likewise, it combines a vertical threat (with vertical movement) with a horizontal threat (and horizontal movement), forcing the defense to be very good with their eye discipline.

I'm a huge fan of trips concepts, so much so that there will be a post specifically for that. But in the mean time, we'll look at how Mike Leach really brought the Mesh concept to glory (and subsequently was copied by almost every team that throws the ball), that's by combining a China Concept (essentially a corner route combined with a route to threaten the flat) with the mesh, to form a triangle on one side of the field. 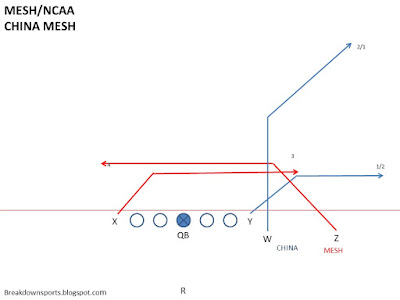 This progression is easy for the QB. The QB starts with the high/low on the CB to determine if he should progress to the corner route or to the flat route. If the CB sinks, he moves the flat; if the CB is flat-footed, he looks to the corner route. He then determines if that receiver is covered, because sometimes that receiver that is being targeted isn't open due to the defense's rotation or its ability to make up for the CB's coverage.

If that's the case, the QB moves back inside to the first mesh receiver to the same side. Most of the time, the flat is able to be covered because either a LB bails outside at the snap (and the CB sinks) or a safety charges hard from the 2nd level. Either way, that often leaves a void in the hook zone of the defense, which is where the first mesh receiver is targeting. The flat route pulls the defense outside and opens up the middle of the field.

Next, if that receiver is covered, it likely means that the mesh in the other direction has come open with a lot of space to work with. To cover the triangle concept, the defense needs to rotate fairly heavily, leaving few defenders on the backside of the play. This gives the receiver a lot of space to work in, find an opening, and be a threat to the defense as a bail out for the QB late.

Lastly, look at all the natural rubs in this scheme. W-WR clears first. Z-WR rubs off the butt of him, making it very difficult for the CB to follow in man coverage. The Y-TE comes underneath the Z-WR, setting a pick on any defender trying to cover him inside to out; this typically allows for a very quick initial read for the QB and the high/low read to the sideline to become clear. Then you still have the mesh concept, which some coaches will run differently than others, but typically from my experience, the receiver away from the two-man concept will go underneath, allowing him to get into the triangle quicker to assist the progression. This gives three of the four receivers a rub route.

But some coaches can coach the opposite. They can teach the inside most receiver to set the depth, the receiver closest to the LOS to set the depth, or simply call out who sets the depth based on the match-up they want. For instance, if the defense plays a lot of man and the coach wants to get the Z-WR open in space, he may have him go underneath on the mesh concept, providing him with a second rub route before he gets open in a lot of green grass. So there are lots of options.

Likewise, a lot of teams like to incorporate the RB into this concept. Because of the quick hitting nature of the play, despite all the rubs, you can effectively run five routes (typically the 5th route will simply be a deep route, such as a post, to hold the safety deep). 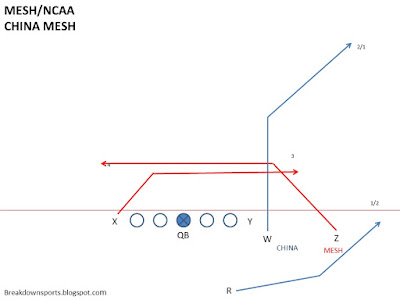 Overs/Deep Mesh
Overs and Deep-Mesh are longer developing concepts. They not only require the receiver to cross the entire field, but also do so at depth. Because of this, they often require more pass protection and often times utilize a play action threat. This threat of play action makes it very difficult for the defense, whose eyes have to identify targets coming from several locations on the field. Naturally, the DB's eyes are first drawn in by the run-action, next, they'll naturally tend to look for the receiver they lined up over. This is where the deep crosses makes it difficult for safeties in particular. Add in a natural rub, and man-to-man coverage from the CBs is similarly difficult to cover these long developing routes.

A drag or an out route from one of the receivers leads to a natural hi-lo toward the sideline, while forcing the defense to heavily rotate and potentially leaving the far receiver open to a one-on-one coverage in space. 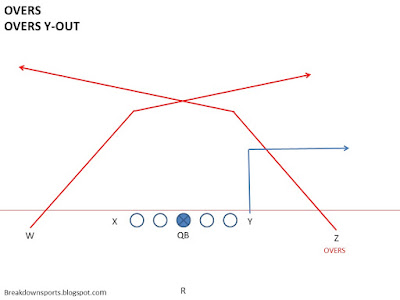 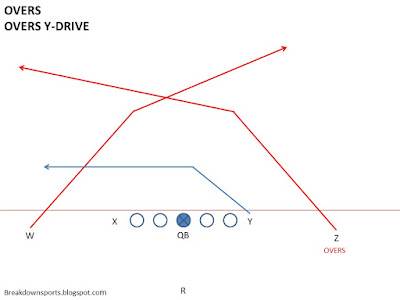 Of course, a post route really threatens the defense vertically. Here, the safeties are really put in a difficult position, having to cover essentially what is three verticals. Combine it with play action and it's really dangerous. 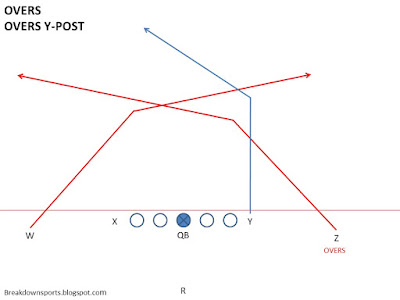 Sending 4 receivers probably isn't practical unless you are a spread team and facing a defense that doesn't put much pressure on the QB (meaning you have good pass pro or they are only rushing three). But you can combine the drive and post to get the benefit of the deep threat with the hi-lo toward the sideline. 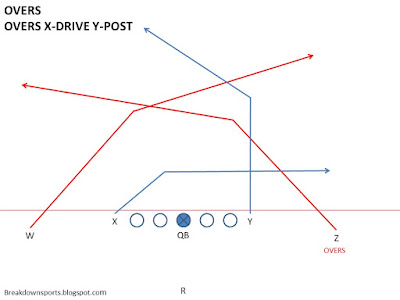 Progression
We won't get much more into the progression than we already have. It's going to depend on the coach and how they want to utilize that. I still prefer to work with movement keys, so define a defender for the QB to look at and try to mitigate extra defenders coming into that area by running them off or holding them with other routes. For the NCAA routes, it makes sense to essentially start with the NCAA Route Combination progression. Because of the timing of two-man routes combinations, typically I'd start my progression there, before coming back to the mesh. But sometimes you really just want to target the mesh concept.

Links
There are a bunch:
Air Raid Playbook about Mike Leach
Smart Football on the evolution of the Air Raid
X's and O's Lab