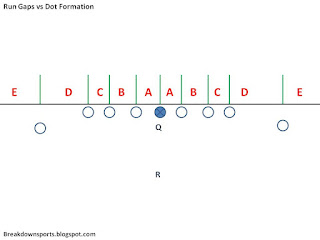 For a defense to be successful, they need to have "gap discipline". Being "gap sound" means having a defender in place to stop the offense on both sides of every blocker. By having a defender responsible for stuffing the play in each gap, the defense forms a wall at the LOS, and the offense has no way to be successful. It's the offense's goal to force the defense to lose gap discipline or be unable to cover the gap (by creating space). Each gap is an option for the ball carrier, and each open gap is potential for the offense to spring a play. In this post, we'll look at how gaps form against a few formations, and how lead blockers and pulling blockers change the numbers at the point of attack.

Standard Single-Back Pro-Style O
Let's first look at a 12 personnel, single-back look. This is a common look for many modern pro-style teams, such as Iowa or Wisconsin. Typically these teams have a zone-based rushing attack, and they use the addition of TEs and Wings to add gaps laterally across the LOS. This forces the defense to have to be disciplined both forward and laterally. The 10 gaps go from A to E on both sides. 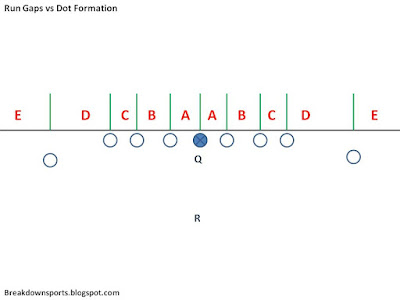 Standard Spread Formation
Now, looking against 10 personnel, double twins set. Notice that the gaps are the same; just because they are WRs, doesn't mean that the defense doesn't have to account for the gaps on both sides of them. Many of the quick WR screens take advantage of defenses that can't account for the gaps on the outside. By playing off, defenders can often "two-gap" (defend two different gaps) and allow pursuit to help cover the other gap, but playing off also leaves you susceptible to being blocked down field, which means giving up yards (just because the block occurs off the LOS, doesn't mean that the gap doesn't exist, its origin is just farther down field). The spread formation works space laterally to its advantage, having several "wide" gaps. 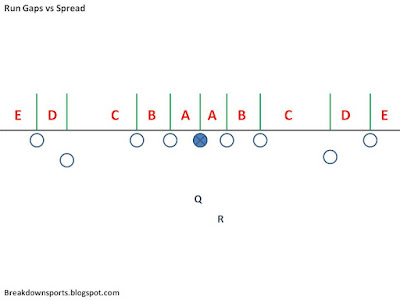 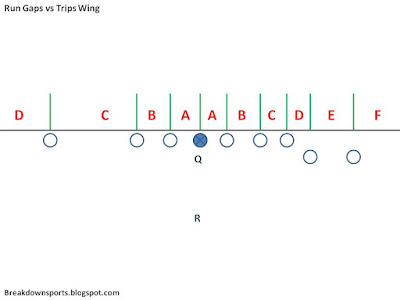 An unbalanced formation, or tackle over, works in much the same way. Typically, the way to defend it is to determine where the third OL is (the one most centrally located) and make that the nominal-center; it doesn't matter who is snapping the ball, the OG can snap the ball, you start you gap numbering with the center OL.

Pulling OL
By pulling an OL, you don't add a gap, instead, you move a gap. The advantage here is that you take a gap away from the backside of the formation and add it to the point of attack. The difficulty for the defense here is that they have to adjust gaps after the snap. Typically with zone teams, particularly from spread formations, struggle to manipulate gaps; the gaps are the gaps and the defense knows the gaps they need to defend. Pulling blockers forces the defense to adjust on the fly. By adding more gaps to the playside of the formation, it is also a bit easier for the ball carrier to take advantage of the open gaps the defense leaves. 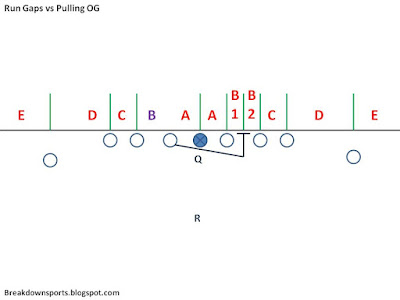 Of course, sometimes you pull OL outside as well. That doesn't change anything. Pulling an OL outside adds two gaps to the outside, while taking away a gap on the interior. 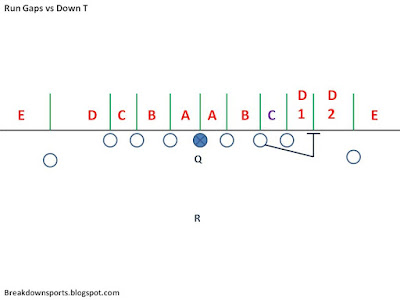 Inserting a FB
By utilizing a FB, as an offense, you lose one of your vertical threats in the pass game. To make up for that, you add to your run gap multiplicity. By starting behind the LOS, the FB can be inserted into the play to add gaps along the LOS.

A Power block adds a gap outside to the playside of the formation. Typically, the block is a kick block, and that opens up a gap inside of that kick block; however, sometimes the block arcs inside and the RB can bounce. The point is the same though, a gap is inserted on the playside and outside. 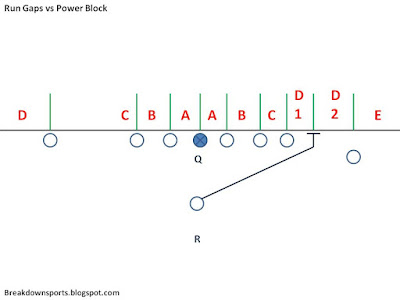 A lead block also adds a gap to the playside, but now it's on the interior of the formation. Typically, this forces the LBs to adjust on the fly in order to defend the gaps. Of course, prior to the play, they don't know where the gap will be inserted into the formation. 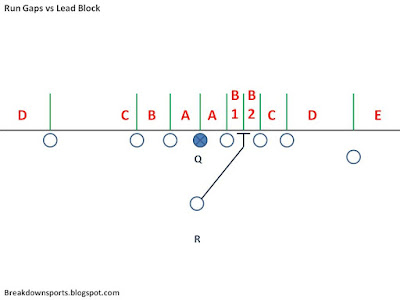 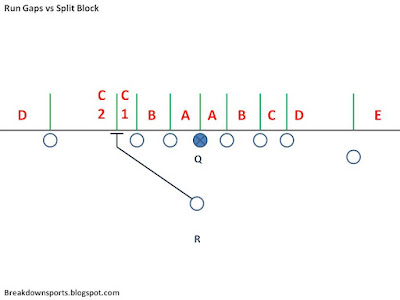 Power O
Plays like Power O (or counter F/H) flip a gap to the point of attack and insert an extra blocker to the playside. Essentially, the playside adds two additional gaps post-snap. The defense, of course, has to be able to account for this after the snap. 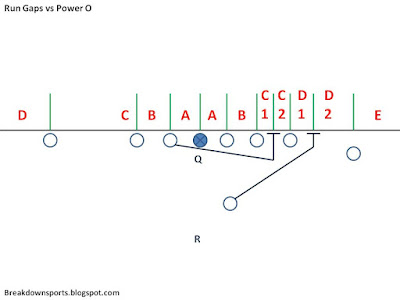 Conclusion
Each style has it's obvious strengths. Spread formations create larger gaps from the offset and force defenses to cover in space; however, they don't allow as much run game variety because there are fewer blockers to work with, and on the outside, sound defenses can generally two-gap the outer most gaps. Formations with FBs allow you can insert gaps anywhere along the LOS; the downside is that you lose a vertical threat and by starting off the LOS, you have to beat the defender to the spot (or else they can begin to two-gap or form a wall, similar to spread formations on the outside). 12 personnel best defines the gaps pre-snap and makes it difficult for the defense to two-gap because most offensive players begin right on the LOS; however, similar to spread formations, it is more difficult to get run game variety, and you are generally forced to play in a tighter space because you don't have blockers in position to allow the field to be stretched further horizontally.

So all have their strengths, all have their difficulties for defenses, and all can be used to the offense's advantage. But at the end of the day, as long as the defense plays gap sound football, they can shut down any offense.
Posted by Space Coyote at 8:04 AM