Inside the Playbook: Iowa's Outside Zone Gap Counter

Iowa has long been known for its use of the stretch zone run scheme, and they love to use a FB within this scheme for a variety of reasons. In fact, one of their favorite runs is the lead outside zone play. Because it is such a staple of the offense, opponents have stressed the importance of defending this play whenever they face Iowa, to the point that Iowa has established a number of "counters" to take advantage of those defensive strategies. The most common strategy that Iowa utilizes is a pin and pull scheme, but they also incorporate other variations. In this post, we will look briefly at how defenses defend Iowa's stretch scheme, and how Iowa deployed a "gap counter" to effectively counter those strategies. 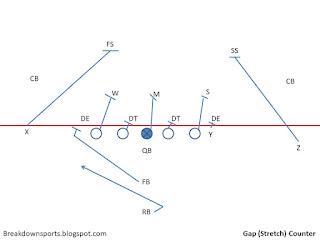 Defending the Stretch
Like any run defense, the primary emphasis for defending the stretch play is to be "gap disciplined". Maintain your gap assignment, and there should be no place for the offense to run.

So a sound defense wants to maintain gap discipline and not allow the blockers to seal or wash down. At the LOS, this means that the defense will want to get their hat in their designated gap, maintain shoulders parallel to the LOS, and anchor their position. By winning their helmet within their gap, they maintain their gap assignment; by keeping their shoulders square, they maintain their outside arm free, allowing them to disengage from blocks and make a tackle on a ball carrier entering their gap; by anchoring (which requires winning hat playside and maintain parallel shoulders) you prevent the offense from pushing you to the sideline. All these things prevent you from being sealed to the backside of the play, but also prevent horizontal displacement. This "setting the edge" and anchoring in interior gaps reduces the creases that can form within the front, it condenses the run lanes, and makes it easier for the second level players to flow and attack.

At the second level, LBs are typically going to read clear/cloudy within their assigned gap. By this, what I mean is that they need to continue to scrape until they have an open crease to attack their gap. This clear/cloudy read allows them to continue to work over the top until an opening is found, and then slam the hammer and fire into the LOS. If that opening appears immediately on the playside, you want the LB to take it immediately.

Again, the purpose of this is to maintain gap discipline. Scrape to maintain your ability to defend your gap, but then attack when given an opportunity. As a smaller LB, you don't want to allow the OL to work out to the second level where they can seal you. You want to attack them to prevent them from getting movement on you and forming creases within the LOS. Furthermore, attacking the clear read is going to force the ball carrier to make a cut. This forced cut reduces the number of creases that he can run through, making the play easier to defend. The overall idea is to form a gap disciplined wall at the LOS, get penetration to reduce the width of the play, and flow to the ball.

Iowa Stretch Zone
Iowa runs a lot of stretch, including with a lead blocker. Here's a number of examples from a few years ago, and notice the multiple ways they use a lead blocker to seal the defense on the backside of the play. 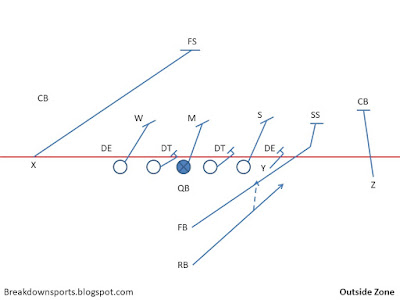 LINK
And from shotgun as well:


And with a lead blocker:

LINK
Gap Counter
You can get a feel in the above plays what the defense was trying to do, and also why they were unsuccessful in stopping the stretch scheme. But obviously, teams have been able to stop the stretch, and even in the above video against MSU, Iowa doesn't have a ton of success running the stretch. So in comes the "Gap Counter".

For the "Gap Counter" ever blocker on the LOS is going to release similar to how they release on the stretch play. They will all step "playside" and work first to second level blocks. But here, instead of deep bucket steps and reaching their hat across the defender, they are simply going to down block in their gap. This is a counter to the stretch scheme, but the OL is down blocking a gap: if there is a DL in the gap, they down block; if the gap isn't occupied, they work to the LB level and seal the LB.

The RB, for his part, will have counter footwork. His first two steps mimic his stretch footwork, before pivoting back to the backside of the play for his third step.

Examples
In the first example, Iowa is going to work back to a tight bunch formation. Notice everyone down blocks, and the CB loses his force responsibility when he follows the outside WR inside. 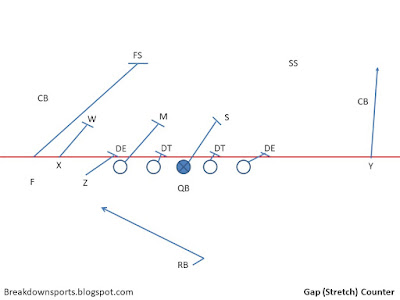 Here they are running it from 11 personnel. Notice the single WR is going to crack the backside safety, forcing the CB to be the force defender. He comes too far inside, and the offense gets the edge and a long run. 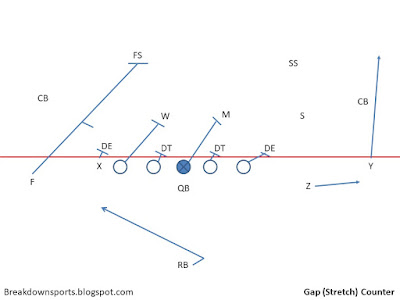 Here they will use a FB as a lead blocker. In this case, the FB is going to go to the opposite edge, similar to split zone. If the backside EMOL shuffles down the line, the FB will log him back inside. If he maintains outside force leverage, the FB will attempt to kick him outside. 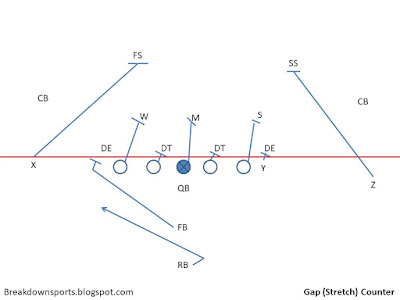 Trolling
Wisconsin had a great offensive run game plan against Iowa in 2017 which I'm going to go into more depth in a future article. Wisconsin, like Iowa, runs a ton of stretch zone. The Hawkeyes were the Badgers tenth game of the season, and this was the first time they just happened to show this play:

Sometimes you get some good ideas when scouting an opponent. Also notice how the DE scrapes down the LOS and the FB is able to seal him inside.
﻿
Conclusion
You can see with how teams try to defend the stretch scheme how a counter play - sans puller - is still highly effective. In each play clipped above, you can see DL busting their ass to get "hat playside", only to end up on the wrong side of the play. On each play, you see LBs start flowing and crashing down, effectively taking themselves out of the play. The first few steps all tell the defense "stretch", and because stretch is so stressing on what it tasks the defense with doing, this simple counter is extremely effective as an added wrinkle.
Posted by Space Coyote at 12:50 PM