You see it everywhere. You see it on this blog. People talk zone running and they inherently talk "Inside Zone" and "Outside Zone". Then you hear some football minds talking, and you might hear "Tight Zone" and "Wide Zone". In many cases, those will be fully synonymous with the former. But they aren't always, and in fact, there can be a small distinction, even if everyone doesn’t agree on the nomenclature. And what if I told you ('30 for 30' voice) there was something called "Middle Zone", or "Mid Zone" (not to be confused with midline). These are all concepts that exist at certain levels of football. Many coaches will combine these schemes and utilize pre- and post- snap adjustments to bridge the gap. Some will teach only some of them to get really good at those few concepts without having to worry their players about subtle nuance. But some really dedicated coaches will teach all of these concepts. I'm going to give a primer on each of these concepts in this article. 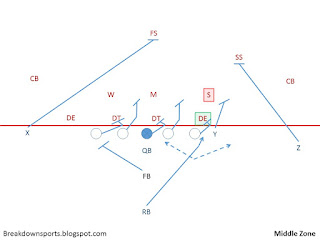 Belly Zone
This is a cutback play. The aiming point for the RB is going to be the frontside A gap, and if that closes down, he's going to work back, all the way to the backside C gap if necessary, depending on how the defense is flowing. This is a play that can work great with BOB blocking to help keep the width of the backside EMOL while allowing the FB to work through the LOS to the second level. The front side OL can take advantage of knowing this is a cutback play to work the backside shoulder of the DL and make sure to seal their guys toward flow or wash them down immediately. 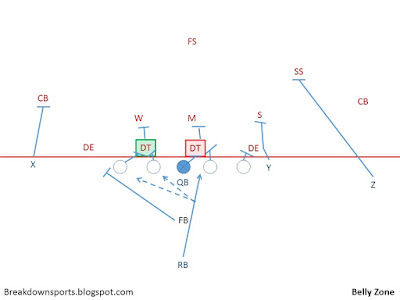 I've previously talked about Belly Zone when it comes to PSU. Here, they have altered the aiming point to the backside A gap. The play still often cuts further backside, but also has the option to bounce front side as well. PSU pairs this with a classic zone read, and also runs a lot of TE arrow route RPOs to take advantage of the backside attempting to crash down to limit the cutback. 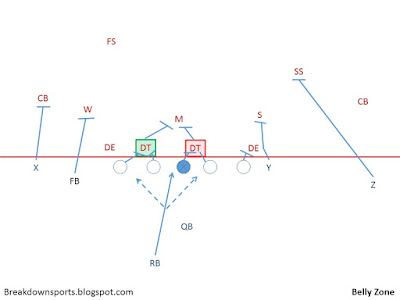 Tight Zone
Tight Zone can be a bit difficult to run from I-formation because of the path of the RB being so narrow. This RB on this play also aims at the playside A gap, but now he has the option to work to the frontside B gap or all the way to the backside B gap. The major difference between this and inside zone is that aiming point, and many teams combine the two schemes to a degree depending on the bubble in the defensive front and the tendencies of the defense (line games, LB blitzes, etc.). Still, the footwork of the RB is typically a little different (they hit the LOS downhill). 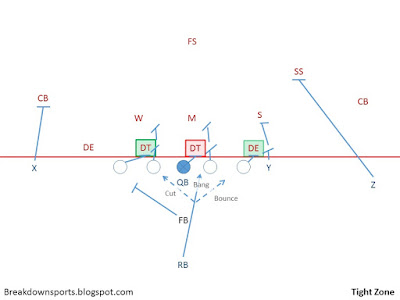 This is a more common run from pistol and shotgun because it is easier for the angle of the RB. Teams like OSU (particularly under Herman) ran this quite often. Again, this allows for the RB to work a little more downhill by staying tighter to the QB in his approach. 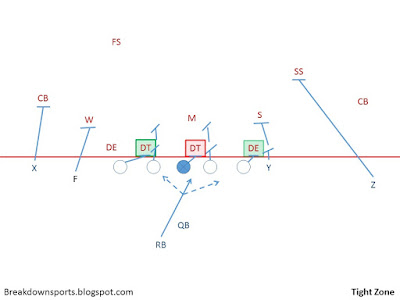 (Note: not all tight zone, but a lot of it is. Notice that OSU often had a "Veer" read, where they read the frontside DE)

Inside Zone
Inside Zone gets talked a lot (and note again that some people will call this type of scheme “tight zone”). The aiming point of the RB is now the frontside B gap, with the options to bounce (frontside C gap), bang (aiming point), or cut (backside A gap). This play is typically paired with split zone blocking (as I've shown so far for all I-form schemes), but may utilize some BOB or Lead blocking (particularly for weakside runs where you can't double on the LOS). 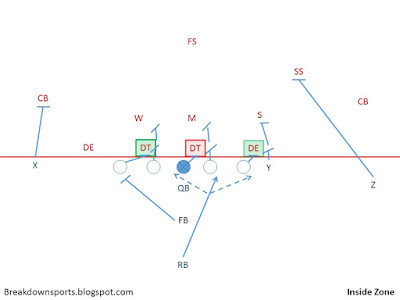 It's also obviously a popular scheme to run from gun, with lots of ways to read the defense. 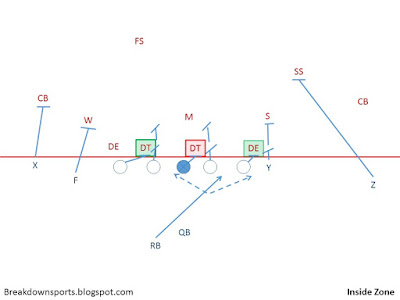 Mid Zone
Mid Zone is often bunched in with Outside Zone to form "stretch zone". The idea is that it is very difficult to actually edge the defense with blocking, and typically you are going to end up widening the defense with your zone blocks and cutting back inside. The aiming point for the RB here is the frontside C gap. Like Outside Zone, he can Bend (cut back to playside A gap), bang (follow path), or bounce (get outside defense). 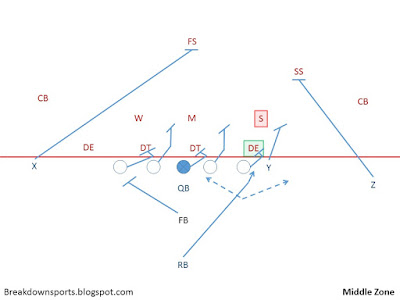 And it can also easily be run from gun. 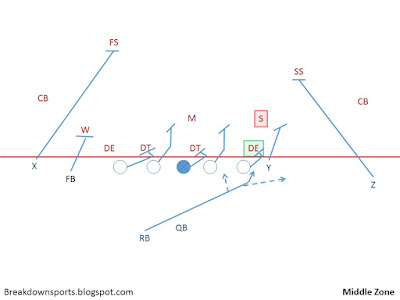 (Note a great point in the video: with Mid Zone, you often want a lead blocker because otherwise you won't get movement from the SAM, which is often necessary for run success in a zone blocking scheme)

Outside Zone
With Outside Zone, you still aren't really expecting to get the edge (though you'll take it if it's given). The primary difference between Mid Zone and Outside Zone is that with Outside Zone, the aiming point is the outside foot of the TE (the D gap). 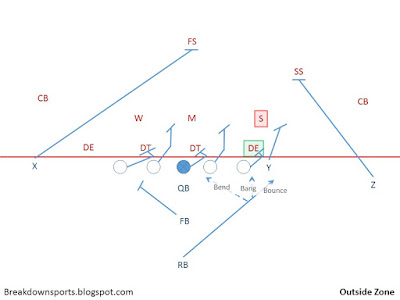 And it can be run from shotgun with many different reads as well and can also utilize a blocking back to your advantage. 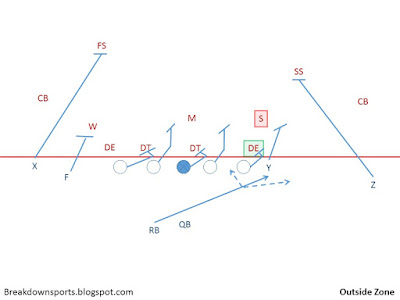 Other names for this are “stretch” and “wide zone”, although I differentiate from wide zone in this post.
Wide Zone
Rip, run, reach, get the edge at all costs (and therefore also known as Sweep Zone). Interior OL are actually going to "parabola pull" meaning they may actually gain some depth with their zone footwork. The aiming point for the RB here is typically 2-4 yards outside the offensive EMOL. To the defense, it's going to look a lot like Outside Zone, but your goal is to get that edge no matter what here (Edit: based on the comment below, I guess I need to make it abundantly clear the caveat of the offensive EMOL and his path on his block; note the offensive EMOL cannot force the “get to the edge mantra like the rest of the offense or else the defensive EMOL could simply continue gaining depth into the backfield and you’d never get around him; because of this they flatten their path to the defensive EMOL, with the goal still getting outside, but open to washing down if necessary, similar to how you would teach a frontside puller to handle a force defender on a sweep; still, the goal of the play, similar to sweep, is to get to the outside of the formation). 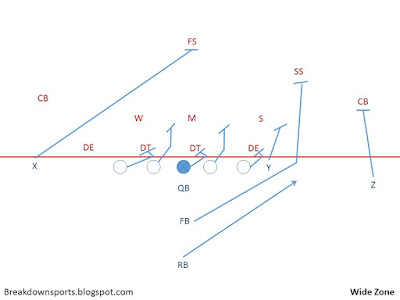 You see it a bit from gun, where the RB is basically working directly lateral at the snap. 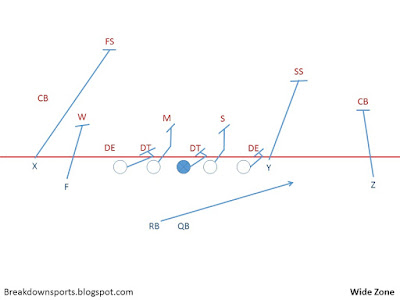 This play has largely been replaced by fly sweeps, pin and pull, and G-Lead, Buck Sweep, etc.