I’ve previously discussed how Wisconsin utilizes Dos, TightBunch, and Wings in formation to run a lot of Power O, Lead, and Counter plays. Similarly, they utilize the width of the formation to successfully run a lot of zone schemes, including both Inside Zone and Outside Zone. In this post, we will look at the swap boot concept, and then in the next post, we will look at similar concepts with small tweaks to the setup. 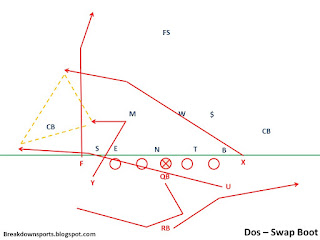 Background
Swap Boot , a pass designed to work off a bootleg pass, was originally made popular by the premier zone blocking teams of the 80s and 90s, specifically, the Mike Shanahan led Broncos. The play works by developing a triangle concept for the QB to the roll side of the field. If you look at the concept, you see the combination of two similar concepts: Sail and Yogi. That’s what forms the triangle for the QB to read.

Wisconsin is also a team that runs a lot of stretch and even a little split zone. These two run concepts set up this play action pass well.

Blocking
The offensive line will start by selling their stretch zone blocks. Stretch is a good concept to run hard play action off of because you can sell the blocks without actually working down field. The backside TE also has an opportunity to sell the stretch play here, but because he is an eligible receiver he can immediately work to the second level. This working to the second level also acts as a natural rub for the “swapping” receiver working behind the LOS to the opposite side of the field while also selling the stretch scheme. 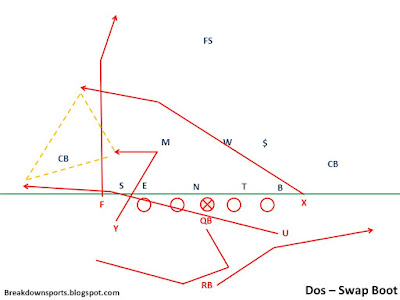 We already discussed the stick route, which initially will act as a second level block, before the receiver will turn out of it and start to gain some width.

The “swapping” receiver can look initially like he’s on a split zone track, although Wisconsin rarely utilizes split zone from their stretch scheme. Still, coverage to his side of the field will often be focused on establishing an anchor in the direction of the stretch in order to limit the width the blocking can establish for the ground game. The defender covering the swapping receiver will typically come from his side of the field, or if bracketed, with a LB. In either case, the backside TE, in running his stick route and initially selling the run, will often seal the defense inside. So the swap route tends to come open because the coverage on the swapping receiver needs to work to maintain his run responsibility while also working around the rub.

The last likely option to be able to cover this is a DB to the backside of the run. This is the purpose of the post receiver, who will attempt to run off the coverage and open up a major void in the flat. Even Cover 2 CBs will have a tendency to want to gain depth in this case with the #1 working vertical. Given the tight splits, the corner route is a real risk, and a real weakness for a Cover 2. While he will have outside leverage, the route coming out of the backfield is often difficult to identify, and so it is common for that defender to gain depth.

The combination of the “swap” arrow route and the Stick route forms the “Yogi” concept. 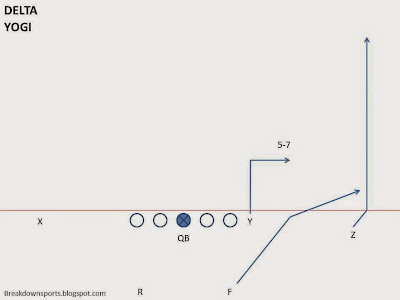 There is also the crossing route coming from the frontside receiver. His working initially to the 2nd level doesn’t look terribly different than the receiver working to seal the box defenders/safety inside to prevent them from sealing the edge on stretch (though he is taking a much more vertical path). He’s going to start breaking inside at 45 degrees about 7 yards, and then make his cross even shallower at about 10 yards and work to 12-15 yards by the time he reaches the opposite hash.
This forms the “sail concept” with the cross coming from the opposite side. 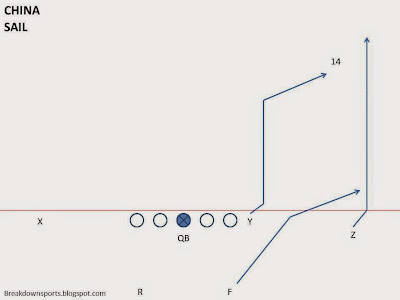 QB Read
This “swap” route will be the QB’s hot read. If he gets pressure, he will immediate throw that route, which will often open up in the void vacated by the blitzing defender on the backside.

If he isn’t pressured, he’s generally going to work hi-lo on the sail concept, but he wants to get through the coverage quickly because this is a YAC concepts (pull the defense opposite, open up space on the other side to allow for catch and run). The crosser will be his first part of the progression in general. After his play fake, he will immediately peek to the defender lined up in initially in the flat to ensure he drops (he doesn’t want to throw into a squatting defender), and if he’s gaining depth or running with the post, then the coverage for this route needs to come from the inside. His first receiver in the progression being the crosser, he will quickly look to see if there is a defender sitting in the hook/curl zone. If that defender has worked forward, driving on the swap route, there should be an immediate void behind it for a big play to the crosser. If he hasn’t driven down, but has dropped or even just maintained his depth, then the QB will quickly move on and want to start working the in/out of the yogi concept by reading the flat/curl defender. Again, if there is any threat there with a defender underneath the crosser, the QB is to move on quickly, he may be coming back this way eventually, but he wants to get the ball out and into the hands of his playmakers in this scheme.

If he's moved off the crosser, his next read the curl/flat defender. If this defender has lost relation in his coverage, the arrow will be thrown (ball must get out, otherwise he will start moving into the sideline). If he maintains appropriate coverage on the arrow, the QB will work back inside to the curl/hook defender and read his depth. If he has gained depth or width, still maintaining him underneath the crosser, he will work to the stick. If he drives on the stick, he will move to back the cross.

Like any crossing route, this works well from a timing perspective, if the cross is immediately open you throw it to the WR running away from coverage with lots of grass. If he isn’t an immediate clear read, you get the ball into the flat and allow that receiver to potentially work upfield, and if that’s covered, the “stick” receiver is just working off his block and gaining some distance laterally for a nice checkdown. If all that is covered, you’ve given your receiver a little more time to run away in coverage, and it’s a safe throw toward the sideline so that you aren’t forced to throw back over the middle.

Some teams may have a route adjustment for the post receiver (could be a corner, post-corner, etc.) as an “alert” (take a shot if when you peak at him early he’s wide open) or even a first read (hi-low the CB), but nominally for Wisconsin, the QB will work this triangle read. (To take that a little further, some teams will read this a little different based on how complex they want to make the route adjustments. The teams that allow more complex reads will adjust the “post receiver’s” route to include him in the initial read of the CB dropping, allowing the WR to run a post, go, corner, or even a comeback route; this was discussed more here: LINK)

Examples
On this first play, the CB drops immediately and the curl/hook defender starts underneath the crosser as he starts trying to drive on the swap. This defender immediately causes the QB to work off the cross route, where he sees the curl/flat defender crashing to the backside of the stretch, and because of that, the QB immediately has his read and gets it out quick.

On this second play, the coverage is a little more cloudy, and it takes the QB a little longer to read. You’ll see, the crosser actually comes open, but the defense is sitting underneath the initial cross as it reads the routes, and Hornibrook decides he needs to move on. The swap receiver is then open based on his read and he makes an accurate throw that allows a run and catch. Had that receiver not been open, the stick was also well covered, but he could have worked successfully back to the crosser.

And that’s exactly what happens here. The defense maintains its initial depth and so the QB works off the cross route quickly. But there is another, intermediate throw that is also available. But the backside LB identifies the concept and runs with the arrow route, and the underneath stuff is covered well. By this time, the defender responsible for the crosser has tried to drive down on the initial route, and that initial angle may have helped dissuade or prevent a completion had the ball been thrown immediately, it now put him behind the receiver when the QB works back to it, and despite a pass a little too far inside, the receiver has position and is able to make a catch.

Lastly, on this play, the cross is not immediately open, so the QB starts working the underneath concept. The flat defender drives on the arrow, the hook/curl defender maintains depth, and the QB is able to check back inside, where the receiver can turn off his initial block, gain some width, make the catch and make a solid gain when he is able to turn up field and the coverage is running away from him to cover the rest of the triangle.

Utilizing Jet Motion as Arrow
Posted by Space Coyote at 11:40 AM