We are now going to turn our attention to something similar to an RPO, but instead of the first option being run (i.e. there is always a mesh point in the backfield), the first option is to pass. This is going to not only include plays where both a run and pass option exist, but also plays where there are separate pass options in a single play, that we've labeled Pass-Pass Options. 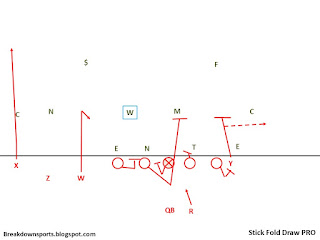 Stick Draw
The most popular pass first RPO in today's game is the stick draw. This incorporates a quick hitting route that typically forces the LB to widen out in coverage to defend. If he gains depth and width, you come down on a delayed run play. This is a great play for either a RB run or for a QB run. 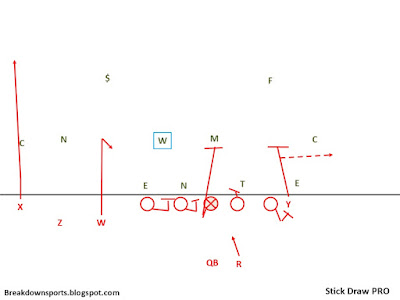 It can also be run out of a two-back set to be a lead draw. 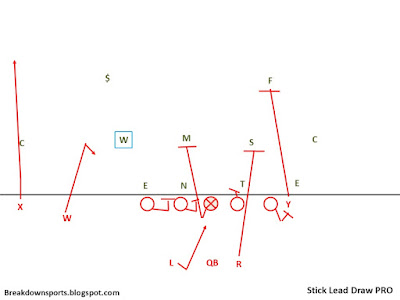 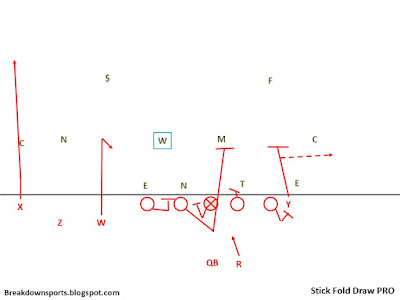 Playing from empty or want a lead blocker with a single back formation. The fold-draw is one of the best ways of improving OL angles but still being able to isolate that second level player in the blocking scheme. And I keep repeating it and will until the cows come home: I love fold blocks. 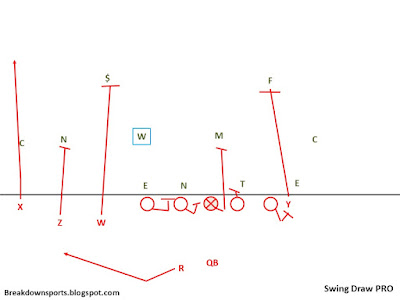 Most teams currently are running this with the QB, but it can also be run out of a 2-RB look with one RB running the swing route and the other staying in for the draw handoff. This is a simple read of flow from the LB, if they flow on the swing pass you hand it inside, if they stay put, throw the swing pass into space. Pick and choose your favorite draw variety (single back draw, fold draw, bounce draw. 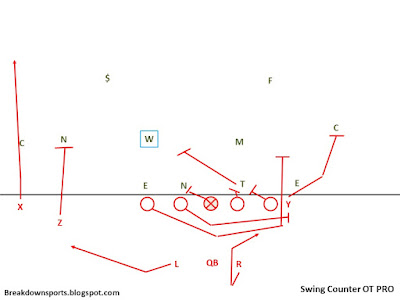 Getting away from the draw play for a minute, if we want to run a pass first RPO but maintain the run threat, we need a longer developing run play in the backfield. So another option is the counter series. Again, we can run this out of a 2-back set, but most teams are favoring the QB run game. Pick and choose your counter of choice (Counter OH, Counter OT, or Dart).

Slide Counter Trap
Similar to the swing, but now utilizing the H-back in a slide screen to attack the flat. This allows the RB either to protect the backside in the event of a blitz, or work forward to cutoff pursuit in the run game.

Sprint Draw RPO.
The sprint draw itself is a hell of a play to defend, but pair it with an actual quick sprint-out pass concept and it only gets harder. Here, you're going to include a curl-flat or spacing type concept that can be read quickly so the ball can get out of the QB's hands. If the throw is open, if the defense isn't able to rotate and cut off the underneath routes, then throw it. If they get width quickly, work back to the sprint draw. 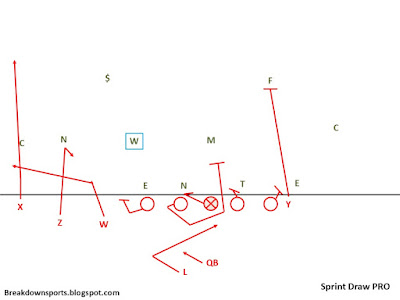 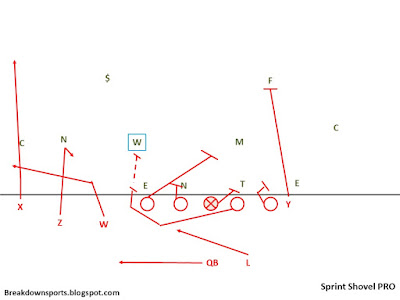 Disclaimer: while the shovel pass statistically is a "pass" play (and technically by the name of it), I consider it more of a run concept. That is why this play wasn't included in my "backfield RPO" article.


I can't stop watching the Kelce TD. Chiefs used every single "option" here during the game. How do you decide what to defend as a defense? pic.twitter.com/np8gV4x3fd
— Seth Keysor (@RealMNchiefsfan) September 22, 2017

Now that we've got that out of the way, let's use the shovel pass as a delayed run. Smart football "brain stormed" this a few years back and we've seen it implemented in the game today. It combines a relatively quick, simple read to the outside (curl-flat or flood being a preferred type of concept) with the option to check back inside to the shovel pass if the flat route doesn't immediately come open. This prevents the "over rotation" that a lot of teams utilize to kill any roll out plays. 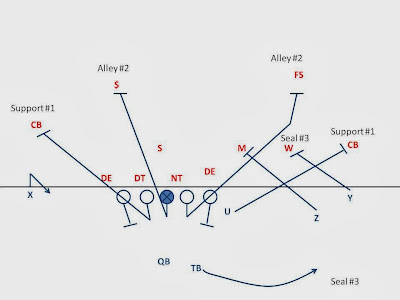 I've previously wrote exclusively about double screens, but the basic idea is that you have a quick screen to one side of the field and a slow screen to the other, and you read flow. Two screens, one play, basic read.

Pass Pass Option
For completeness, from the "read offense" post

This term always gets knickers in a bind. I get it, basically every pass play is a has multiple pass options, how is this any different? You can complain about the name (I promise I didn't invent it), but then we can talk about naming conventions throughout football and go on for days. The basic idea here though is different from your basic pass play.
The Pass-Pass Option (another link) typically combines a quick/rhythm pass route to one side of the formation, followed by a rollout concept to the other side of the formation. If the initial route is open, you throw it, if it's not, you continue to progression to the backside. This eliminates what is often a wasted receiver away from rollout packages.


I’m a fan of these planned escapes. QB assesses the single side presnap. If it meets criteria, throws it. If not, I like full hand release fake, then escape/boot to frontside concept. pic.twitter.com/Px7ANIi1D3
— 5 wide (@5_wide) May 4, 2020

And in some ways you can combine something like a stick concept as the first read, and a slow screen as the second read, as described at syedschemes.com  and smart football.

Etc
And that wraps up the RPO pass concepts for me (for now). If you haven't noticed, there are a ton of blocking schemes that are used to allow these plays to work. But next I'm going to consolidate those to show the various run concepts that can be used in this way.
Posted by Space Coyote at 11:43 AM