We've now touched on the basics of a "read offense", route concepts behind the LOS, and then the quick routes that are often attached to the RPO schemes. Now let's take it a little bit deeper and look at third level RPOs. We already looked at a few of these that are attached to quick pass concepts like the pop pass. In this post, we will look at a handful of concepts that attack third level reads. 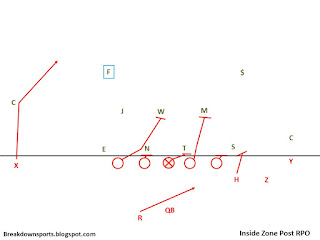 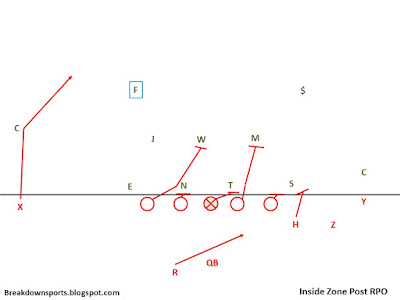 The most common of the third level reads (made very popular at Baylor), this route concept is fast enough to allow for a basic run option read while putting the safety in conflict to defend inside help on the quick post as well as play his run fill. 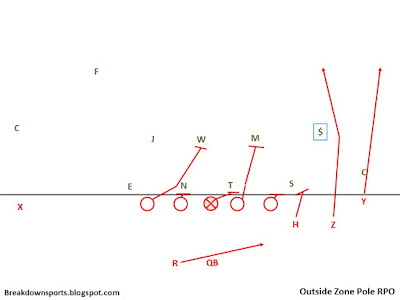 Seam is similar to the 5-step post, only it works with an inside receiver. Here, he will typically have a slight stem outward before breaking back into the seam if the safety crashes down on his run fit. This is typically a play that is run in the same direction as the primary run threat. This is effectively the pop pass we talked about in the last post.

Pole
Pole is an outside receiver putting the safety in conflict by running directly to the "pole". This is only a slight difference from the 5-step post, but it immediately works closer to the center of the field. This is more commonly used in the red zone area. 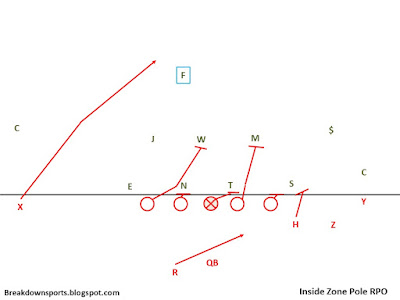 Fade/Stop
Now we are going to get into something a little different. Here, rather than throwing something because your "read" shows it open, you are making a third level read to indicate if you are taking a "shot" or not. In that way, it is almost an "alert" attached to a run. 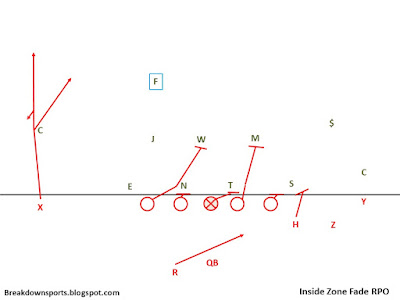 Here, you're going to read the route side safety. If he plays the run or stays flat and inside, you know you have one-on-one with a fade or back-shoulder to the outside. A lot of teams may convert to a 5-step post if the safety crashes.


Wheel-Post
Shot play. In this case, your read is either the defender lined up over the slot or the concept side safety. The "post" receiver is going to stem to rub. If the read defender works toward the LOS underneath the rub, you pull and throw the wheel. The read has to be quick, default is to give. This should typically be paired with a run concept where you can extend the mesh point (i.e. something to the outside). Often, these alert concepts can become "dead" pre-snap if there is a 3 over 2 look from the defense. 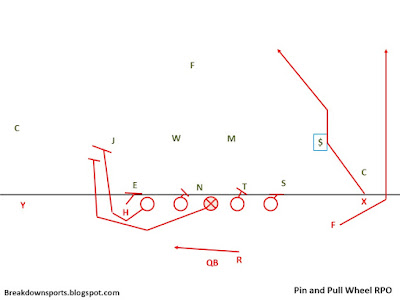 Etc.
That does it for the basic route concepts of RPO. In future segments we will look at the run schemes that can be paired with it (basically any scheme) and look at some Pass Run Options.