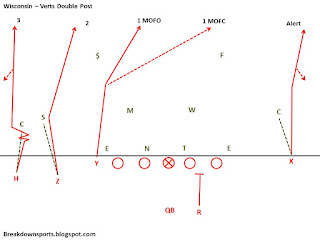 Double Post
First, let's just briefly talk about your standard double post and why it's effective. Almost all defenses have some sort of "help" coming from the deep secondary. Whether that help is over the top, or from the inside, or whatever, depends on the coverage. But for the most part, that help is always limited, because the rest of the field still needs to be covered. 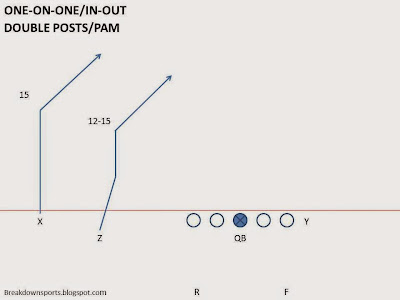 Double posts, like double slants, takes advantage of that fact. The "post" route itself is one of the most difficult to defend. It allows for a long stem, which allows the receiver to get his desired leverage before the break. It also works vertical, which more often than not forces the coverage out of the backpedal and instead to flip their hips. Once you have leverage and you are on the coverage's toes, you typically control the route. Furthermore, it's a route that breaks inward over the middle of the field, but with enough depth to avoid the second level of the defense, so it's one of the easiest passes for a QB to make. So as a 1-on-1 route, there are few that are more deadly than a post. 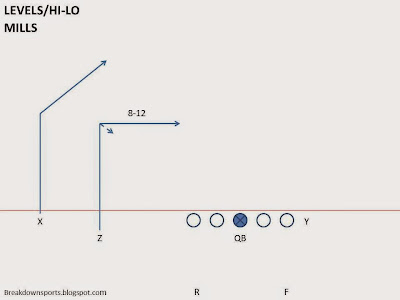 But as I said, almost all coverages have at least some limited help. Double posts forces that help to help on one route, while exposing the other to 1-on-1 coverage. For the QB, he just has to read this help defender - typically a safety - and throw away from him. So you have a great route combined with an easy throw and an easy read: that has the makings of success.

Moving the Double Post Inside
That said, CBs in this day and age are pretty skilled. Depending on the coverage and their help, they know how to leverage routes, especially from a press position. So your standard double post can often be handled by a NB and Safety on the slot, and a CB alone on the outside. This is one of the reason that Mills is so popular, because the slot's route adapts better to avoid the help coverage and clear out the middle of the field for the outside post.

But in a 3x1 formation, you can find other ways to take advantage of the defense. First, most teams incorporate auto-checks to handle trips formations. While that adjustment is likely to depend on the called coverage, the adjustment will often be more consistent and less exotic than what was original called (meaning, if Cover 4 is the call, a defense will likely have a go-to trips check, that may be different than if Cover 1 was called; however, some of the exotics that can come with a Cover 1 or Cover 4 call will often go away to help defend the formation). So moving to a 3x1 likely gives you more insight into the coverage based on film tendencies.

But a trips formation also gives you a little better matchups as well. There are tons of trips adjustments, but for the purposes of this, there are really one main aspects: does the single side safety help over top of #3 or does he stay to the single receiver side?

If the weakside safety helps over the trips, it leaves a lot of grass for the single receiver side to work 1-on-1. While he isn't part of the double post concept, in Wisconsin's case he runs a streak and you can option based on leverage (post, fade, back shoulder) without interfering in the primary concept.

More than likely, there is only going to be a single safety helping over top of the trips. The safety most likely will have primary responsibility helping over the #2 and #3, because those are the defenders that likely need more help (by being inside, it's more difficult to leverage the receiver, so they tend to have a two-way go; the coverage is also often relegated to LBs, Safeties, or NBs rather than your best CBs).

Now the double post is read just like it typically is, but your 1-on-1 match up isn't going against a top CB, but more likely a LB or safety. Being the good 1-on-1 route that a post is, this is a favorable match up for getting open. 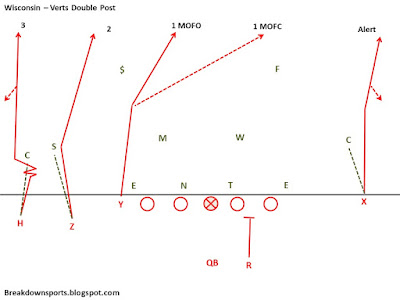 The last thing to notice here is that #1 on the trips side delays his route a little bit. He wants to run his route into the sideline to provide grass for the double post, but he also wants to work within the timing of the read. If for whatever reason the QB isn't confident in double post concept, the delayed outside fade release of #1 gives him a safe fade/back shoulder option as a last resort.


BYU Example
Note the scenario: 3rd and long in the red zone. This will come up again. Weakside WR is immediately vertical trying to get over top of CB.

TE lined up as #3 to trips is going to try to get on the toes of his coverage. If MOFC, he wants to cross the safeties face and open up grass behind him. If MOFO, he's going to work more vertical.

WR lined up as #2 is going to have a bit of an outward stem to widen the coverage and try to force him to turn outside. Remember, this receiver has a two-way go, so gaining outside leverage on the coverage is a real threat for the CB. Get on his toes, try to turn him, and then bend the route back inside to the upright (you want to keep the route close to the hash).

WR lined up as #1 is going to delay his release. Wisconsin runs quite a bit of smash fade with a slant instead of a hitch from #1. This threatens that, but also improves the timing for the QB read. Notice this receiver is about 5 yards behind the other routes.

In this case, BYU stays in a single high coverage, TE crosses face and gets movement from the safety, and the QB throws to the second post.

Now for a second example. This example is going to drive Don Brown nuts, because note the situation: 3rd and long near the red zone; this play you know was scouted for this scenario and they got beat on it still.

Weakside WR can't get outside leverage as the CB does a good job knowing he has help inside; that makes his route dead but it also means the safety help is working weak.

#3 to the trips identifies split safeties, so works his route a little more vertical. The MIKE is trying to Wall any crossing route, but because he's only walling he doesn't get any reroute. This forces the safety to help out over the top immediately.

#2 to the trips gets some width with his stem but never leverages the VIPER defender. Still, this extra width provides him the grass he needs. Because Michigan has an in/out on #3 (rather than a true two high coverage), the safety doesn't have depth to react over top of #2. There is a small enough separation to fit the throw in the pretty small window. But it's an easy read.

#1 to the trips, notice the slightly delayed release again. He wants to get to the sideline and gets extra width.

From the end zone

Etc.
This is also the same concept that Alabama scored the game winning TD against Georgia with in the 2018 Championship Game. Here, the QB looks off the weak safety and the CB never reroutes to that side, giving a free release and opening up #1 weak.