Many of the best current offenses often circle back to old formations. In the NFL, along with the modern spread concepts, you see a lot of the best offenses utilizing Wing T concepts. This set of plays does the same where it can (though, again, recognize that the option packages and fake packages are not included in this post, so it is somewhat limited). Below, you will see each play blocked against the two fundamental Even Fronts (4-3 Over and Under). 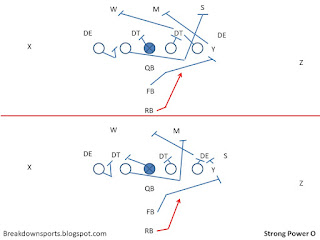 Gap Plays
Duo
Also known as "Power without the Puller". On Duo, The RB will read the MIKE. If the MIKE fills down, the RB will bounce. If the MIKE scrapes over the top, the RB will punch it up the middle. Often confused with Inside Zone, there are some specific nuances to tell them apart, but it's important to note that this is a gap run play, not a zone run play. 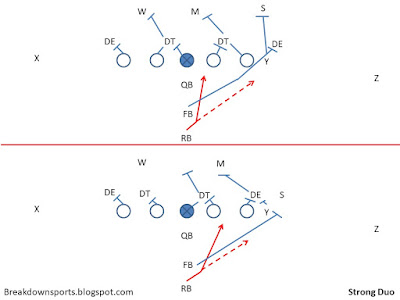 Gap Belly
A gap blocked version of the belly play, made famous in the veer offense. Here, the offensive line will gap block (double and back), while the FB is going to quickly kickout the defensive EMOL. The RB is going to get downhill quickly and try to hit between the outside down block and the kickout. Double teams aren't extended as the goal is more creating a playside crease and hitting through it quickly. 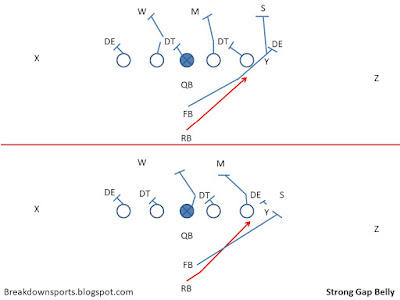 Bounce
A gap blocking play designed to look like Duo, but intended to bounce outside. The initial path of the RB is downhill, like Duo, however, the FB is going to log the EMOL and the intent of the play is to seal the defense inside before bouncing outside. 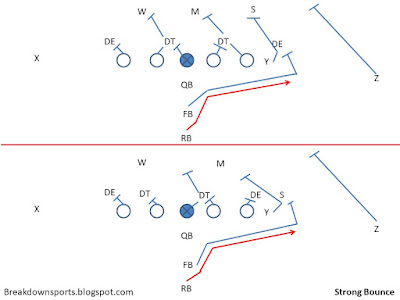 Pulling Plays
Power O
RPO - Run Power Often. The quintessential run play if there ever was one that can be run against any front in a wide variety of ways. 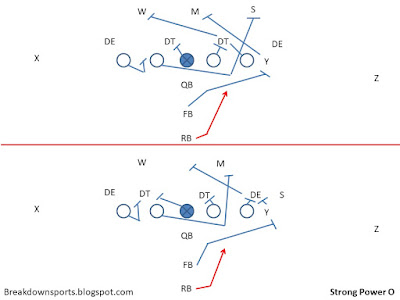 Lead Power O
A three-RB run play. The first RB playside will now be the "kickout" player and the second one will lead through the hole. Can be accounted for with playcall, with formation alone (if the Y is off, he becomes a back) or some other set of rules. 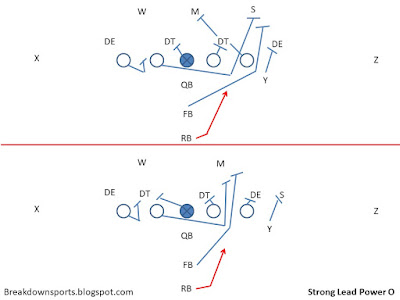 Single Lead Power O
Another three-RB run, we now utilize "single back Power O blocking" (kickout with the OT) to allow for a second lead blocker through the hole. This will tend to run a little tighter due to the nature of not having the LOS extended. Note, however, if there is an unblocked defender threatening the edge, the playside "lead blocker" has to account for him rather than lead through the hole. 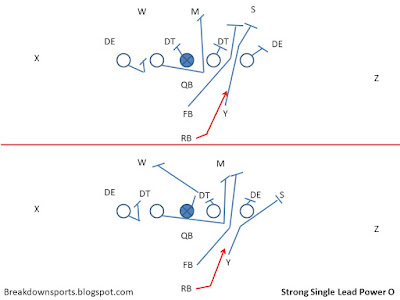 Down Power O
Another version of Power O, this time it does not rely on extended doubles, instead, only downblocks (i.e. there are no first level down blocks, uncovered OL move directly to the second level). This helps seal the defense to the backside of the play, and makes the play much more of a D-gap run than an A-B-C-D gap read. 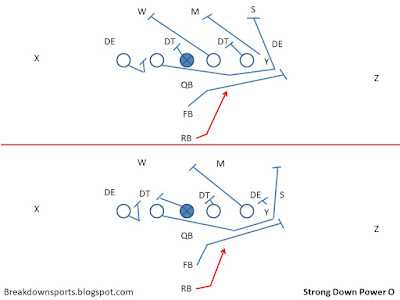 Bounce Power O
Another variation of Power O, now with the intention of bouncing all the way outside. In order to do this, the FB will now log the EMOL and the pulling OG will work around him. In order to ensure he is sealed inside, the OG may have to double the EMOL, and because of this, the playside double/TE will work to the playside LB. 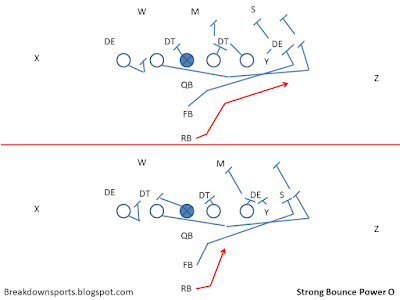 Power O Y Boss
Y Boss is a good change if defenses start spinning down a SS playside. Because of the path (Y try to work outside the EMOL) it tends to look like a release into a route or a reach block, which helps to widen the EMOL for the kickout, which makes it also a good schematic answer to 6/6i Technique DE or spiking DE. Note that this play will tend to be C-D gap run because now the backside LB is not accounted for with the front. 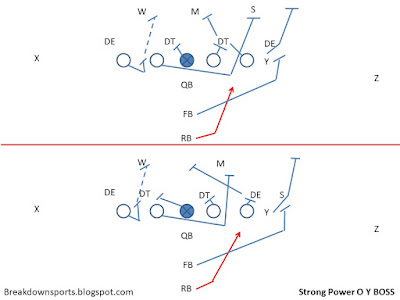 Lead Single Power O
When running Power O from a single back formation, the offensive EMOL is responsible for kicking out the defensive EMOL. Despite having a 2-back set, we now look to utilize the second RB as a lead blocker, and therefore blocking on the LOS like a single-back run. This is a good changeup if you have a defensive EMOL that is attempting to wrong arm the kick out or spike inside as he doesn't have the spacing to do those things against a blocker on the LOS. It also helps if the playside LB is beating the OG to the run hole, as now the lead blocking FB can meet him quicker. 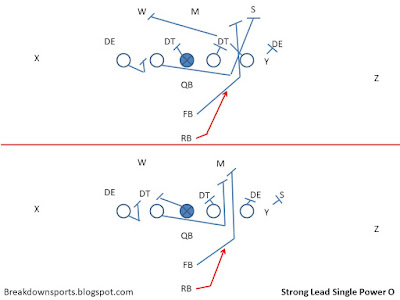 Boss Single Power O
Another way of a handling a SS spinning down playside. This time we will run single-back Power O, and utilize the additional back to account for the SS. He can work outside the LOS or through the LOS as needed. 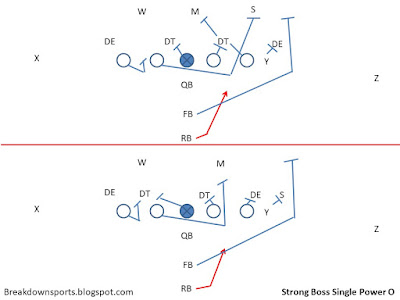 Splint Single Power O
Adding split flow to Power O makes it very difficult for the defense to ID. It also allows the backside OT to move directly to the second level to cutoff the backside LB. 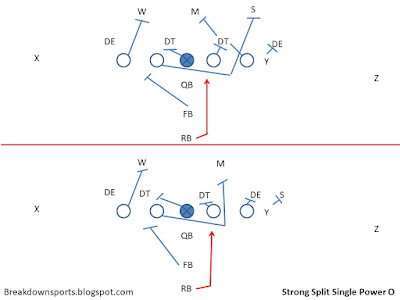 BOB Single Power O
Again, a split flow look. But here, the FB is going to work up to the backside LB. Because of this, the RB can first read the Center block. If the Center gets beat playside, he can log that block and the RB can cut into the backside A gap. Otherwise, run single back Power O playside. This helps prevent flow from the backside of the play. 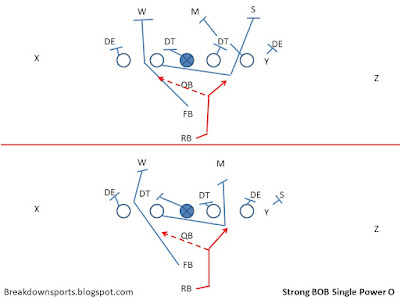 Power C
Traditionally, this is more of a line call. Where a backside 4i technique can be difficult to block back to for the center against an Under front, the Center can pull rather than the backside OG. However, if defenses are keying your guards and you have a center capable of pulling, this makes for a good change up and allows the play to hit just a little bit quicker due to the Center being one person closer to the playside, but note it is now a B-C-D gap run. 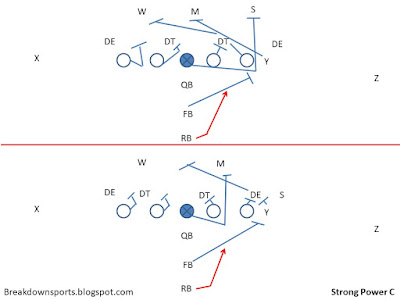 Scissors Power O
No read now, the RB is cutting the ball to the backside of the play. The frontside looks like Power O, but the OL is slipping the downblocks and sealing the defense playside. Great against overflow from the backside. 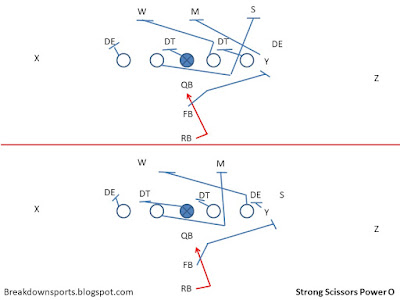 Lead Scissors Power O
Similar to the last play, but now we are utilizing the FB as an additional lead blocker to ensure the backside LB gets blocked up. 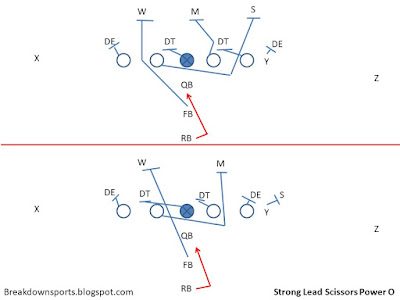 Log T Lead
Moving away from Power O, now we are attacking outside with T lead. To get there, we are now planning to utilize the FB to log the EMOL and allow the Tackle to pull outside of the play. 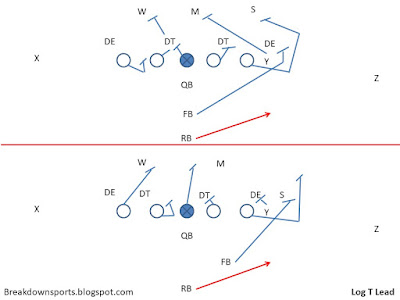 Crack T Lead
The Log block can be difficult, so utilizing a crack block adds an additional blocker from the playside and allows for the preferred schematic setup of having two blockers outside the frontside puller. Additionally, this allows the FB to be a lead blocker for any defensive filler, and forces CBs to tackle instead of LBs. 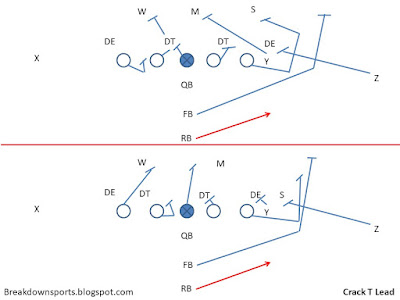 Crack Lead GT
Pulling both frontside OL as a playcall. This play must get outside quickly because LBs can shoot that gap, but this gets a lot of mass outside leading the charge. 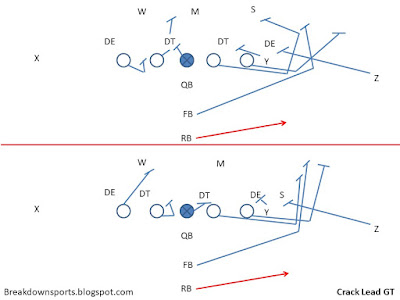 O Fold GT Influence
Taken from Flexbone/Wing T playbooks, this takes advantage of the natural defensive flow of the defense in response to Lead GT. Pitch the ball to the RB on an initial path like the Lead GT, and once the ball is received, work directly upfield. This play may result in unblocked DL, which means you must see evidence that they are chasing the pullers. The TE can slip his first level block once he feels the DE release in the direction of the pullers. A counter to overflow from the D. 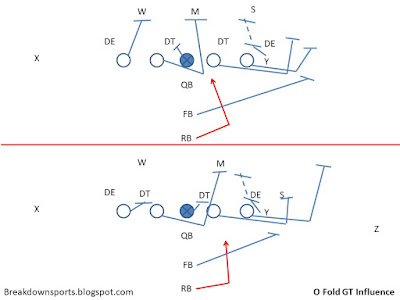 OG Sweep
Classic sweep play with pulling both OGs. TE tries to seal EMOL inside to allow both pullers to work up; FB may be tasked to help with this responsibility. 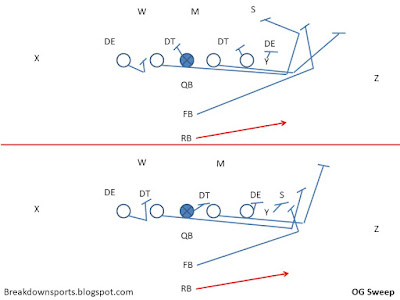 Load OG Sweep
Add the QB to the sweep play. This effectively takes away the pass threat, but similar to load QB runs, this adds an additional blocker playside. Four lead blockers on the sweep outside. 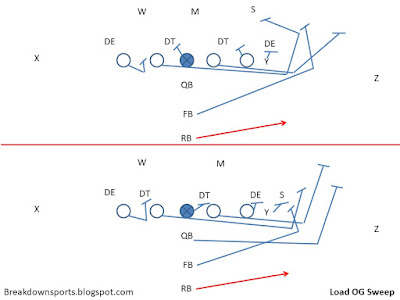 Packers Sweep
The run play that Lombardi made famous. Here, the FB is going to lead through a hole and help double the playside DT before that double works to the LB level. Helps prevent internal penetration and forces the LBs to not overplay flow to the playside due to the FB's path. 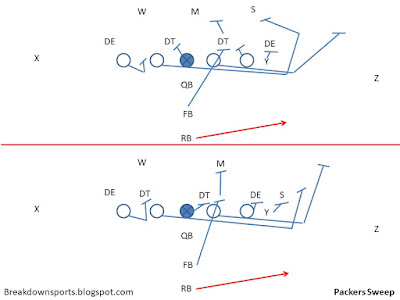 * Note, all nomenclature is my own, though attempts to be fairly consistent with standard. As plays get added, you can add "tags" to base plays (as I have done) or create single word names to take the place for shorter communication.
Posted by Space Coyote at 12:00 PM