With an incredible defense, Mark Dantonio ushered in one of the most successful coaching tenures in Michigan State football history. While the highs of his tenure will almost certainly be remembered by those quarters-heavy, no-fly zone defenses, his downfall will at least be partially linked to the ineptness of the offense overall. While I don’t believe scheme was the primary issue for the 2019 Michigan State offense, fans will be interested in understanding what Mel Tucker brings in with his new staff. Due to the timing of the coaching change, Tucker heavy relied on bringing his old staff from Colorado with him to East Lansing. With Tucker comes his former Colorado offensive coordinator Jay Johnson. I’ve taken the task of watching the 2019 Buffaloes in an effort to highlight what to expect from the Spartans offense in Tucker’s first year.

Inside the Playbook: Michigan's Down G Run Play

Against Notre Dame, when attempting to attack the edge, Michigan attempted to utilize their traditional pin and pull run scheme. In this scheme, they are traditionally trying to "reach" with the TE to set the edge and pull around and up from there. But against Western Michigan, they adjusted their attack by running a "Down" scheme, rather than attempting to reach at the point of attack. This can be a different play call altogether, or it can be a scouted aspect of the offense and a line call. Either way, let's take a look at how it works. 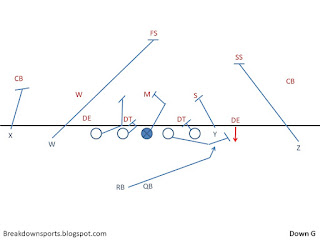 Read more »
Posted by Space Coyote at 1:30 AM No comments: