It always bugged me when at Michigan, Rich Rod would call his Lead Outside Zone play "Power". Football terminology is notoriously inconsistent from program-to-program, where the same word can mean very different things. But Power had established a sort of agreement and consistency, it is down blocks on the frontside with a backside puller, a true gap/man scheme. Yet here was Rich Rod calling Outside Zone "Power." It made my head hurt for a long time, until one day I was looking through the Joe Gibbs's playbook, and the rationale behind it struck me.

As I noted in the History and Evolution Series, power itself was originally focused on the Power Sweep, as a sort of variant to the inside run and option series. As Option Teams (often Wing T types) moved more toward zone blocking in the 70s, Power had to be adapted in ways to fit what they did. Rarely did these teams pull within the formation, it was mostly zone blocking, occasional traps as a change up, and maybe a lead pull around the edge.

So thinking within the sense of not pulling blockers (even around the edge), you ask how you can still get outside the formation. The answer becomes outside zone blocking with a lead back trying to open up the alley. And you get this, from Joe Gibbs's playbook (which also contained traditional Power O by then).

"Power" for lead Outside Zone is a Joe Gibbs holdover. Here he has drawn up "Power" and "Power O" pic.twitter.com/Ul0JhBHCQn

So your traditional zone looks like this (here with a split block from the FB): 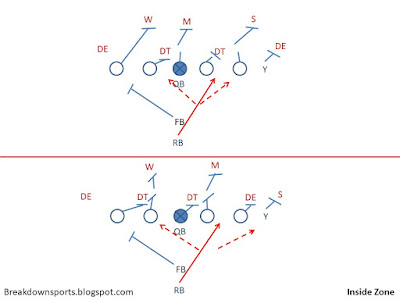 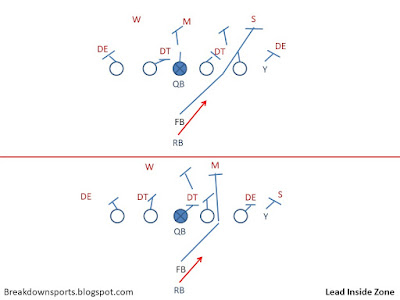 And what it effectively looks like is single back Power O, where the FB replaces the backside puller.

Now remember, for the zone teams, what they were really working into their playbook was the Power Sweep, but it's not all together different in concept, except the blocking up front is Outside Zone blocking. This essentially means instead of the combos working further playside, they'll be more vertical in Lead Outside Zone, but the idea is the same, the aiming point is one player back as the FB accounts for the playside LB as a lead blocker (taking the role that the backside Guard traditionally plays as a lead blocker in Power O).

And that is how Rich Rod and Joe Gibbs came about "Power" as an outside zone play and it looked like this (here with a fake split flow in the backfield).

And that's how this becomes "Power" (with a fake split flow from the RB) pic.twitter.com/0k5oAPkz3U

Here it is with multiple backs near the goal line

And protected by an early version of a same side pop pass in the slot (note: the outside WR runs a hitch route that is used if playside DBs are dropping off to handle the inside verticals)

Note: Both retained traditional Power O within their offenses, but at least in the case of Rich Rod, was not favored compared to zone blocking.

Part I - The Power Series Origins

Email ThisBlogThis!Share to TwitterShare to FacebookShare to Pinterest
Labels: History and Evolution, Inside zone, Lead block, Outside Zone, Power O