Part I - The Power Series Origins

While "Power" began to be defined as the Off-Tackle Power O variant in the 1980s, most offenses, including the split back dominated West Coast Offenses, retained much of the Power Series plays within their playbook, albeit under different names. This made use of multiple backs to alter the backfield flow, changing the kick blocker, lead blockers, or sending someone elsewhere altogether.

The Way Forward for Power Sweep

This is effectively the same thing as Buck Sweep, a popular Wing T play within the 1970s. And certainly, that existed in the 1975 Delaware Wing T playbook
And would remain a fixture as the Wing T was adapted for the modern game.

As off-tackle Power became more of a base play, teams also started incorporating a "Bounce" version of standard Power to get outside on teams that started to try to condense on the kick block.

While this is likely a standard Power O call, the defensive EMOL along with the standard pull and depth naturally allow this play to bounce outside.

Bluff and the Origins of Modern Counter

16/17 A Bluff is an iteration off this Power Sweep, with the FB faking the block on the backer and the PSG kicking him, in a Down Scheme type play. But importantly, it retains the kick block, and the wrap block.

This looks similar to the way some teams currently run Down G with a backside pull. Here it is with a Center pull instead of a BSG

The intention today is not to cover the Counter OT and Counter OF/OH of the world, but it is nearly impossible, because:

Right, they are cousins. By the 1990s, most playbooks included both, but that wasn't originally the case. Many option teams (and the utilization of zone blocking had come about by now for many of those teams) rarely pulled OL. But they still did incorporate trap blocking as a changeup. Thus, your off-tackle Power in those systems now largely relied on a kick block from a BSG and a lead from a FB (or in this case, no lead)

Counter until that time had largely been based on misdirection within the backfield, including with a play fake. This cousin of Power largely changed that. Counter OT started like most counters of the day, with backfield misdirection and a playfake.

Or could be a fake to the Tailback and a counter with the FB, holdovers from the split back era with a modern off tackle Power O setup

In the mid-80s, the zone revolution came about, and teams like the Joe Gibbs Washington football team. This allowed the use of FBs, but also 12 personnel with wings to seal the backside.

And while the backside began to prove difficult to block, Counter OF came about, utilizing the same two plays to kick and wrap as Power, but inverting their responsibilities.

The other item that zone/option teams were used to is Fold blocks as an interior changeup to their base schemes. This resulted in an A-Gap Variation of Power existing in many playbooks.

90/91 O Is a form of A-Gap Power, with the playside OL kicking out the defense and the BSG wrapping to the MIKE.

Also seen within Nebraska's Option playbook of the era

NDSU’s bread and butter - A Gap Power. Look at the discipline by the left guard to stay square through his pull. pic.twitter.com/bUgGtqOhHx

Dealing with a 6-Technique

A head-up defender on the TE has historically caused a lot of issues for Power. Too tight to kick, not far enough inside to get a good combo and drive inside. Arcing the TE is a key way of messing with the TE. The arc often causes the 6-technique to naturally widen, as if getting into a pass rush or protecting the reach block.

14/15 HB O is a Y-arc variant of Power O, which became a common way of blocking a 6-technique defender. The arc block generally widening the player for the kick, and allowing the TE to handle the overhang.

16/17 BIM (as seen above, but this time with a Y-arc) has s potential double-team on the C-gap defender with the PST and FB, with the Y-arcing outside the play and the PSLB getting logged by the puller.

Lag O is a form of A gap, single back Power with split flow in the backfield, which is an early form of Dart. Mostly throughout the 80s and 90s, teams retained various forms of split flow to prevent defenses from being able to identify the direction of the run immediately at the snap.

While the answer seems obvious now, given all the Power Solid and Split flow versions of power you see above, early spread teams largely struggled with figuring out how to block Power within their framework. Some went straight to the modern answer.
Others attempted to avoid the pull in favor of the trap, as we saw with early zone based teams, which Air Raid largely maintained as a primary blocking scheme (note: the F here doesn't matter if he's aligned in the slot or backfield)

3rd & 8 with a chance to force a FG attempt. Someone has to make a play.

Another favorite of the time was Dart

Mizzou running Dart vs. the Double 4i Front

- H roots out Overhang Defender
- LT blocks down on 4i
- LG & C double Nose, climb to Will
- RG blocks back on backside 4i
- RT wraps for Mike

And some teams started to realize pass setting the playside kickout was easiest
The Patriots included it in their Jab series, which allowed them to pull either the BSG or BST, depending on the defensive alignment
And now teams run it out of both 11 and 10 personnel 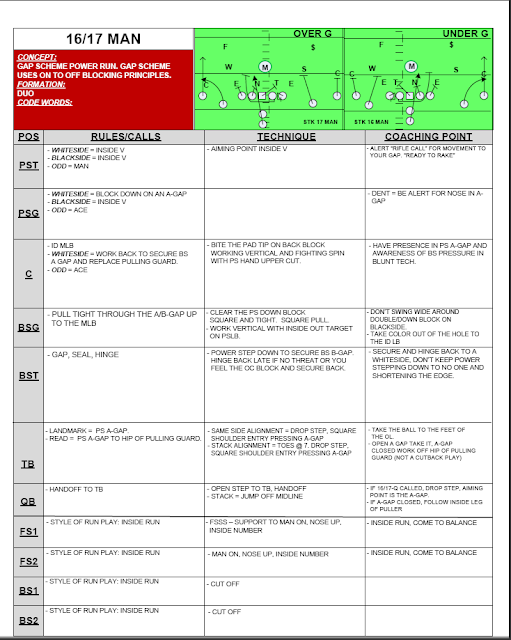 In 11 personnel, teams were trying to think of ways of dealing with a 6-technique again, this time without the benefit of a backfield kick blocker. A TE vs a DE can be a bad matchup, and result in not expanding laterally, or often without combo help from the OT if there is someone in the 4i-techinque. The solution is a different sort of BIM block, with an Off-Y combo blocking with the PSG to the BSLB while the PST kicks out.

Maintaining Multi-Back Offense
Dating back to the 80s, teams that went to split backs wanted to maintain some of the numbers advantages they received from the 3-RB T-formation. This led to plays such as BOB Trey O, which was Power O with both backside OL pulling. 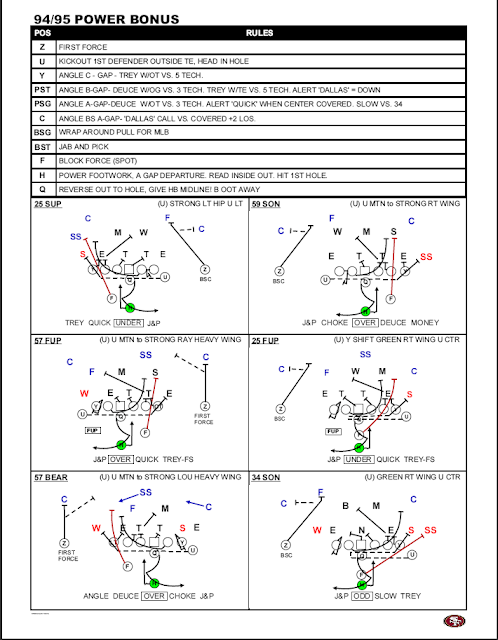 In a more modern sense, this has involved the Q Run game, utilizing the RB as an additional blocker.

Teams have also learned to utilize WRs or TEs on the Shovel pass to make use of Power blocking.

Read Option
A major way teams have tried to "add blockers" despite going spread is a return to the read option game, an interesting twist from using Power as a constraint to the T-formation era option game.
People knew they wanted to utilize Power blocking within a read scheme, but originally struggled to figure out how
Around this time at TCU, they developed what became known as Power Read.
Here it is utilizing a WR to get into 2-back and have a Lead Power Read
Which in turn made use of a lot of the ways to add second blockers to the misdirection and option game (Y-Arc, Lead, etc.) along with Dart. Thus, we came largely full circle to the original T-Formation stuff. 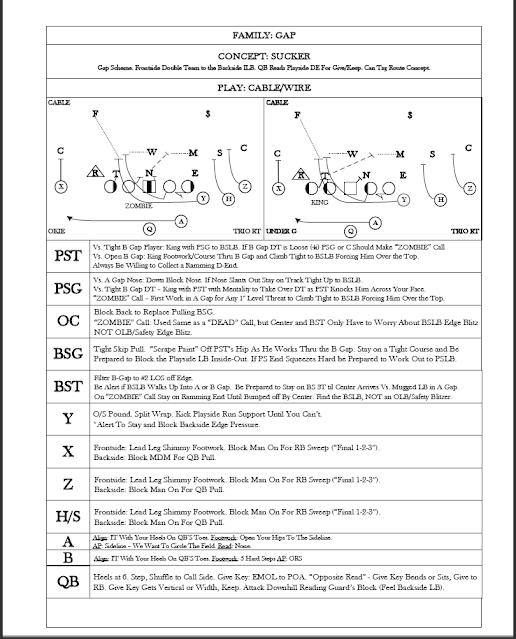 Penn State running dart read with McSorley AND Barkley was absolutely vicious. Either could have popped for big yards pic.twitter.com/pumIZpXz4b

To avoid tipping to the defense that runs are opposite alignment, another way to effectively run Power Read is with Power Toss, which runs it back to the RB alignment
A few other read iterations are the following: 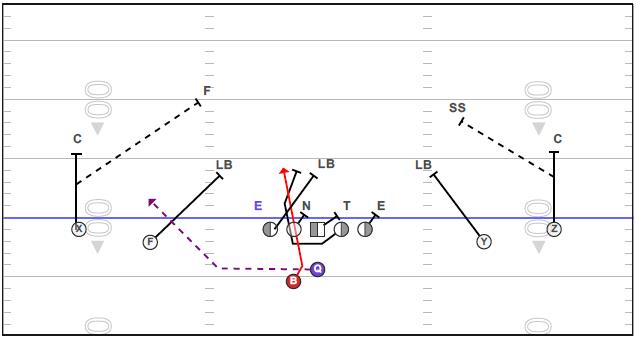 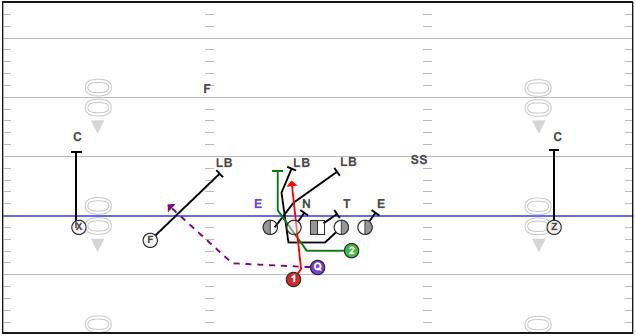 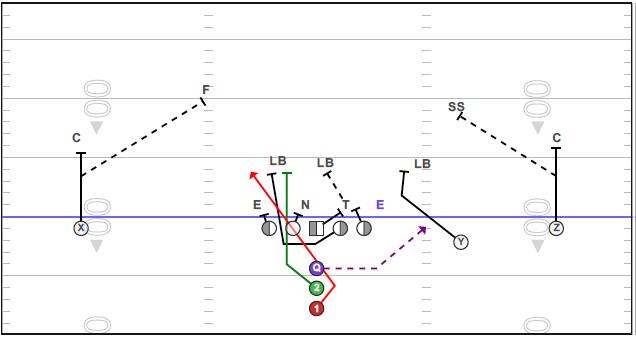 And now it is largely used within the RPO game, both for screens (already seen when Auburn was doing it in 2010), and for the downfield attack
Ultimately, Nick Saban had this to say about it:

Saban talking about how lead/gap scheme RPO's do a better job displacing second level defenders to open throwing windows than zone concepts making them harder to defend, which makes sense considering his defense saw it every day in practice pic.twitter.com/ScourJNl3d

Power read again, this time give to the jet with 3 arc/lead blockers. MSU 2nd level does great to leverage blocks, squeeze the hole, and flow at LB level to limit to 3 yards, but it starts with the CB and overhang pic.twitter.com/DigfD7CtE0

Power with the C and Y trading responsibilities. C kicks the 5, and Y is up to the PSLB.
Malzahn used to call this counter back in his HS days pic.twitter.com/VNAaMnApCQ

Pulling the Center rather than the BSG based on defensive formation

Mississippi State shows two great answers to LSU’s 4i Alignment with an Overhang LB to the Strong Side.

In this defensive alignment, it is imperative for the edge defender to keep contain! pic.twitter.com/1GQj6OfnjB

Power has withstood the test of time. It has lived on in various iterations but has remained a part of football for nearly 100 years.  It is versatile, adaptable, and dependable. It is, indeed, "God's Play"

And here's a backside cut against the pull, with Power Scissors

Smart Football - Explanation and Cut-Ups of the Power O

The Spread Offense - How to Run Single Back Power

Run The Power - Why Weak Power is Great