On Saturday, Penn State pulled out a direct snap offense, in which they lined up initially like a normal shotgun snap, and then shifted late such that the RB was behind the Center and the QB aligned off set. This sets up for an offense where the QB can still be utilized as a run threat, but the RB can get the ball into his hands immediately and take advantage of some of the interior run schemes while the fairly mobile QB can still threaten the edge. More specifically in this instance, it allows you to run Power O with your RB without being forced to block the "kickout" defender (he's blocked with the read). It's an interesting wrinkle that puts a lot of pressure on the play side of the defense, but it isn't without it's limitations. Now on film, defenses can react based on those limitations. So how can the Nittany Lions grow this package to take advantage of what defenses may show going forward? Let's speculate. 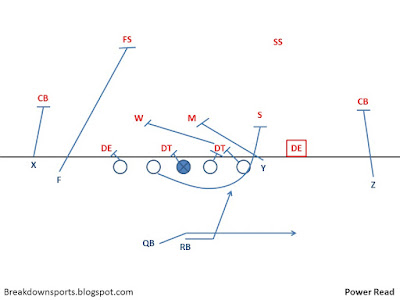 What's On Film
As stated above, the first play we see in this package in the Power Read. It looks like this:

But what's important here is that the Michigan defense in this instance was so concerned about the frontside of the play because of the design that they over-committed to it, thus leaving a huge cutback. Even without effectively scheming the defense by stressing the front side, PSU was able to get a major play out of it.

PSU would come back to this play later, both running the QB to the boundary and to the field (note that the run to the field was also to the weakside of the formation) without much success. So you start to wonder if the package has already worn out its welcome and without the element of surprise or initial over-reaction, is it a worthwhile package. PSU did also hand the ball off the the QB and tested the LB in space, and it went for only 1 yard.

As a counter, PSU also ran a "Dart Read", as in the RB read the backside end and the initial backfield footwork looked like Power Read, but it is actually a counter play to take advantage of overflow. This was something I had immediately speculated about because of the front side pressure the power read scheme should put on the front side of the defense, however, the play didn't work terribly well. 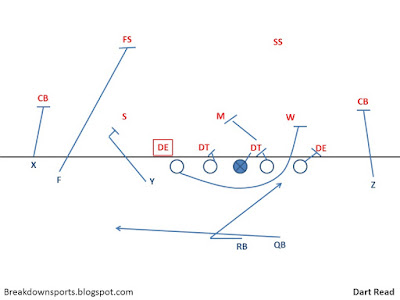 This concept I think has potential, and it's the obvious thing to add to a defense over-reacting to the front side. The problem here is that the QB run threat isn't a significant one. While McSorley is a good runner for a QB, he won't likely be able to be LBs to the edge (as demonstrated by the one give) and may even struggle against DEs that are keyed completely on stopping the give. This means the defense can commit a single defender to him and focus the rest of the box on the RB. So while the scheme still works as a basic concept, with so much attention focused on the RB receiving the direct handoff and so little respect for the QB run threat, this play is unlikely to work any better than a general counter play would. That means you aren't really scheming up success with this play as much as you are reliant on the basic execution of the play, which is fine, you're just unlikely to get more out of it than you would any other counter run.

But there may be a way we can help that...

Scheming Up the Give
One way to make this play more successful as a whole is to enhance the threat of the give to the QB. To do that, we shift the focus of the run blocking from Power to the sweep, while still generally giving a Power Read look.

This can be done in a few ways. The first idea is a common method of Power O teams adjusting to a 6 technique on defense. Rather than the TE attempting to seal the 6 technique inside or rather than trying to get the FB to be able to kickout a 6 technique and requiring the TE to work through the DE to get into his LB block, a "Lead" call is made.

The "Lead" call changes the blocking scheme a little bit and generally allows the Power O play to bounce outside. Now, the TE steps outside the DE. Typically, the TE has an outside release for one of two reasons: zone blocking scheme or releasing into a route, and the DE's natural reaction to this is to widen a bit. By widening out he makes the FB's kick block easier. The pulling OG will not aim for the MIKE, by the way. But if a DE's job is wrong arm the kick block or squeeze inside, as it often is when he's aligned in a 6-tech, then the FB will just log him inside and the RB can bounce to green grass.

In this instance, we are focused predominately on getting the edge. By the H-back "Lead" blocking on the edge, he seals the SAM inside. The MIKE is still focused on Power and is likely dipping his nose inside, and even then has to fight through the wash to get outside of that before the pulling G can get to him. So effectively, you've focused your scheme not on running Power, but on the sweep and sealing the defense inside. 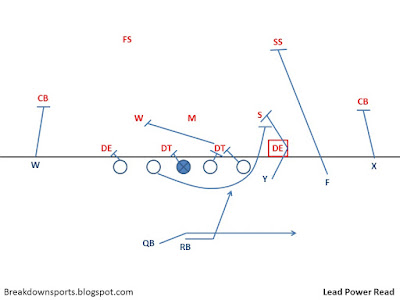 To improve the angles even more, you can utilize a crack block. "Crack BOSS Power Read" sees a slot crack blocking the SAM. Before that, again, the TE is releasing outside and to the safety to block the alley (he will block inside-out before then, in case anyone is savvy enough to get outside). The crack block prevents a scrap exchange from getting the SAM backer with outside leverage on the TE, and if the safety is executing a crack exchange, the TE can now pick him up. Just make sure you can get the TE out of his stance on time or you'll have two blockers running into each other. 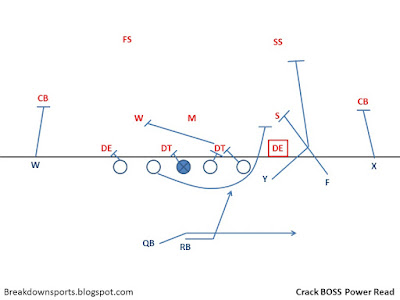 But what if the read aspect just isn't working? The DE is too athletic and you can't get the QB outside of him. Well let's find a way to block the DE inside. I'm not convinced there is a backside OG athletic enough to act as a lead blocker for the give here, so your options of sealing in the frontside DE and SAM with the TE and slot are slim to none. But what you can try to do is get that OG to pull with a little more depth so that he can aim his block to the outside shoulder of that DE. He doesn't need to have a great seal, what he needs is a DE that's peaking inside or squeezing inside and he can get just enough of him to prevent the DE from constricting the run lane. And if the box takes themselves out of the play, then keep on working on to the next level. You potentially have a safety filling down on a QB, but that's better than box defender being able to limit this play. 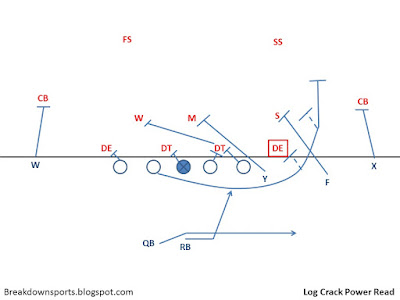 Setting Up To Throw
Because of the nature of the scheme, defenses are not only likely to over-commit to the playside, but to the run in general. Now that we've improved the run threat out of the same look to the QB as well, you can start to expect the defensive backs to want to get more involved in their run fits to hold down the run game. That's when you take advantage with the pass. But you aren't limited to forcing your RB to throw the ball (or course you could always run your normal Power Read play action passes, but I don't think that puts your RB in a great position overall). So what we'll want to look at is various ways of handing the ball off to the QB and adding in your basic roll out patterns with the receivers.

If your QB is at least able to get outside the box defenders to buy enough time (likely because they are focused on the RB), you can run some three person schemes on the front side, like this flood concept. 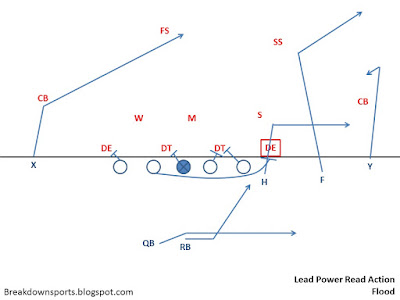 Sail is another 3 person concept that may work, depending on the coverage, and most likely it will result in the 2nd level player getting the pass breaking away from the coverage. It depends on the matchups you're looking for and how you anticipate the defense to react.

If you are struggling to get outside the box and buy enough time for the QB to get through the reads, two man concepts can still work well to the front side because of the defense's reaction to the run threat. Here I'm reach blocking with the H-back. The slot and the outside receiver are both initially working toward the inside to give the appearance of crack blocking and working to the safety, respectively. Especially if you are getting some cloud run support from the play side CB, this can get the WR behind the CB and outside the safety who is looking at his run fits. At worst, you are putting a box defender in a bind between defending the run threat and the slot breaking back outside. 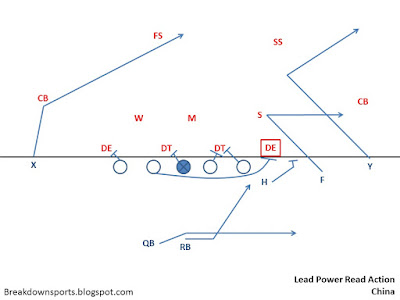 Of course, a lot of defenses today run 2-high coverages against this sort of spread look, and you want to be able to get a receiver matched up against a safety with run responsibility. Against smart defenses, you can further tip the run by "covering" a receiver (i.e. making him ineligible by formation). If you are keeping a receiver in to help block the roll out anyway, it's not a terrible option. Yes, it leaves the defense one fewer receiving threat, but you are buying on them reacting to the enhanced run threat. I've added a pre-snap motion element away from the play to get the defensive backs further reacting to a potential sweep to the opposite side of the field (adding some additional speed to the run threat could really stress the defense to defend laterally, further opening up the down field attack). 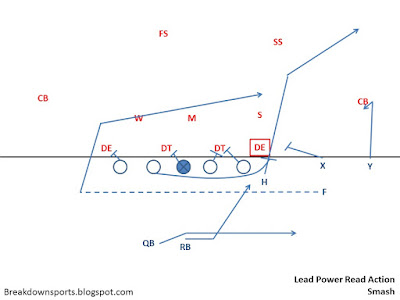 Throw Back
We've already seen the counter run action off of this same look, and we've talked about added the sweep element the other way with pre-snap motion with a WR. But I wanted to look at getting outside the defense with the RB again. This idea is a throw back to the RB. I've added the deep cross from the TE because his release will naturally look like his blocking release, and it provides a way to get a RB throwing the ball. The high-low option here is essentially the RB running after he receives the ball or throwing it to the TE. 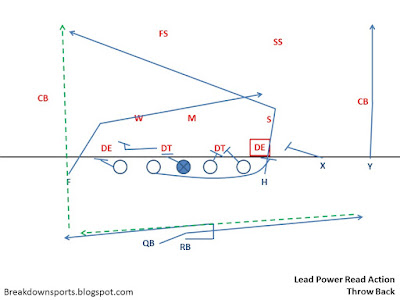 I'm not convinced this scheme will work with the direct snap look, though it may work if you run it out of a typical shotgun formation. The reason I don't think this will work in the direct snap package is because the direct snap puts even more focus on the RB, so even after he gives to the QB, there are a number of defender's with their eyes on him, and it becomes difficult to sneak out of the backfield into the opposite flat.

What Are Your Thoughts?
Posted by Space Coyote at 8:17 AM